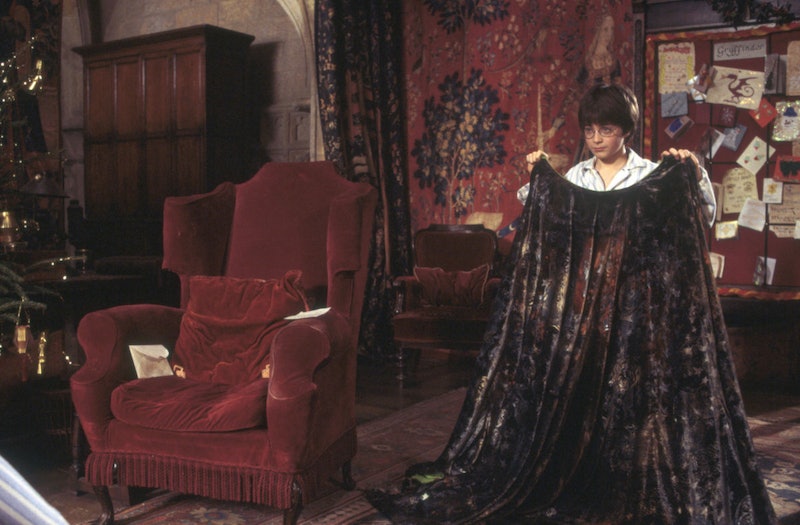 If your favorite part of the entire Harry Potter series was his invisibility cloak (and its propensity to get everyone's favorite wizard into trouble), you're in luck. New research developed by scientists at Northwestern and published this month in Science gets us one step closer to real invisibility cloaks. No, this isn't second-year Potions — it's real life.

OK, so the scientists' first priority isn't quite making Hogwarts-style invisibility cloaks a reality, but rather improving cloaking technology, which makes objects appear invisible or transparent. Cloaking technology has huge implications for businesses, the military and other areas of everyday life. It's shown up in science fiction and fantasy books, movies, and more for years. But it's not just a fantasy; it's been a focus of intense scientific attention for years. According to Futurism, Toyota patented a "cloaking device" in 2017, designed to make the pillars on each side of the front windshields of a car look "transparent" to drivers, to improve their visibility. Their device uses mirrors, while other researchers are investigating the possibility of highly complicated flat-screen technology and cameras and of ultra-thin metallic surfaces that seem to "bend" light and radio-magnetic waves away from them. The new research from the Northwestern scientists fits roughly into this last category, but it's taken an entirely new approach — using minuscule particles of gold and some DNA.

The scientists have basically created an entire new way of constructing materials, through an intensely cool process: using DNA to structure "superlattices" of gold nanoparticles. It's a very technically complex idea, but in essence, it combines a technique called top-down lithography, which takes miniature amounts of a material and "etches" away the bits that aren't needed, with another one: 3D construction using DNA strands. The scientists used lithography to make tiny moulds, then positioned layered lattices of gold nanoparticles on them — all held together by specially created strands of DNA fused with the gold. The result? A super cool new material.

There are a lot of things that are exciting about this development. One is that it means these materials can be precisely arranged in some very peculiar ways that were previously out of reach for scientists. The aspect that's getting the most attention, though, is the fact that if you alter the DNA strands holding these materials together, they can change color on truly microscopic levels — like pixels, but far tinier. The optical possibilities are endless, and the researchers reckon that they can alter the DNA to replicate virtually every color known. That could mean big developments for future cloaking technology.

This isn't the only bit of cloaking technology gaining speed right now, either. One of the biggest issues with human-invented cloaking devices is that they need to be able to cover every aspect of the light spectrum. Earlier in 2018, a discovery from Harvard scientists debuted in Nature that proposed just that: lenses made of titanium "nanofins" that could transmit all the different wavelengths of light in exactly the same way. The astrophysicist Ethan Siegel wrote in Forbes that this sort of technology could be the way forward for cloaking devices, as it could allow every wavelength of light to "bend" around an object and continue in its original direction without stopping, rendering the object itself invisible. That, right now, is the holy grail of cloaking devices — and it may not be far away.

At this point, it's not a matter of "if" cloaking technology will exist; it's probably more a question of "when." But there's still a long way to go before invisibility cloaks are available in your local store. The DNA-gold mash-up is still a very new technology that hasn't been applied to anything specific yet, and the titanium nanofins are in very early development. It's also not unthinkable, as Siegel predicted, that some of these ideas could end up joining together to make cloaking easier. If you were disappointed that Wonder Woman's invisible jet didn't make an appearance in her 2017 movie, hold on; they may one day be a reality in the sky.