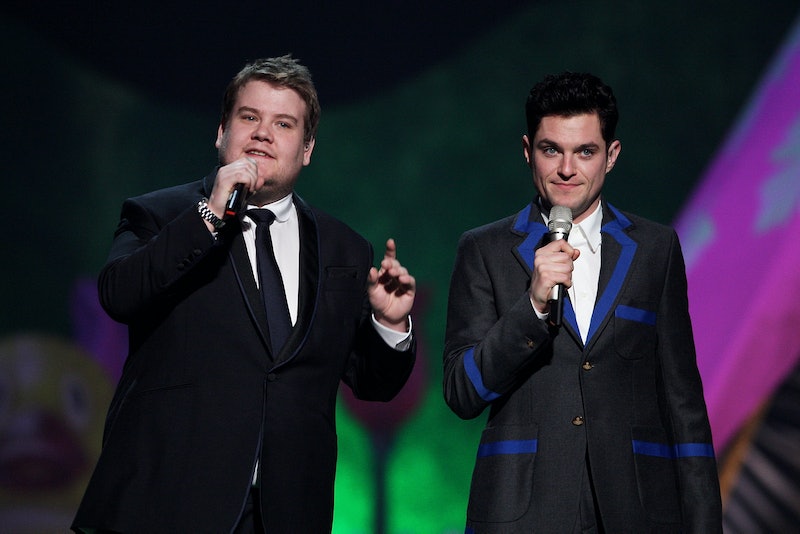 Gavlar and Smithy may be the ultimate depiction of British BFFs, but what about the actors playing them? James Corden and Matt Horne found some success as a double act while Gavin & Stacey was airing, but when it ended in 2010 their work together suddenly came to a halt. There were rumours that the two were feuding and weren't on speaking terms, but seeing as they've reunited for this year's Christmas special, are James Corden & Matt Horne friends?

Recently, Horne and the rest of the cast (aside from Corden) were at a press conference for the upcoming Christmas special, where a reporter from the Daily Mail asked Horne about an alleged feud between himself and Corden and whether he felt the rumours needed to be addressed. The actor gave a pretty swift response (via the Independent), saying "Well you made it up, so no." In 2016, Horne addressed the same rumour, asserting that they've always been on speaking terms. "James remains a friend and never wasn't a friend," he told the Mirror. "We have remained friends ever since we met. We have done various bits of work together and now we are both off doing other things."

During an episode of Piers Morgan's Life Stories this summer, Corden also opened up about his relationship with Horne. "We never fell out, that was never what it was. We went through... we had such an intense love for each other that we were one person for a long time," Corden explained. "And the truth is, these things that were offered to us — the sketch show, the film, hosting the Brits with Kylie Minogue — all these things, we just rushed into them." He continued:

"If I have one regret, it's that we just rushed those things. We were riding this amazing wave and then when it stops, the people that you anchor to are the people you've known the longest, not the people who you've just met."

Morgan then revealed that Horne was asked to take part in the actor's Life Stories episode, but he declined. "I didn't know that, but I can understand why," Corden says. The actor then goes on to explain, vaguely citing the end of Gavin & Stacey and their short career as a comedy duo. "When you know what's coming, when you know that it doesn't end in the way that it could have done, I can understand why he wouldn't," Corden concludes.

He echoed these sentiments in an interview with the Daily Star in 2011, where he opened up further about the reaction to their work outside Gavin & Stacey and how that affected them. "We did our own sketch show but the reaction was fierce. It was hard to go through that. We were riding this amazing wave and then it just dropped," he said. "In one year we spent 263 days together and we went from that to nothing."

The reason they parted ways was so that they could "find and establish" themselves on their own and carve their own career paths irrespective of one another, the actor told the Daily Star. Now they're back and as strong as ever for Gavin & Stacey's return and those rumours of a feud can finally disappear.

More like this
The Sean Bean Intimacy Coordinator Controversy, Explained
By Sam Ramsden
This 'Bridgerton' Polin x 'Love Island' Crossover Is Everything
By Darshita Goyal
Leaving Corrie Helped Michelle Keegan Make Her Millions
By Maxine Harrison
Fred Sirieix's Net Worth Is *Très* Magnifique
By Sam Ramsden
Get The Very Best Of Bustle/UK