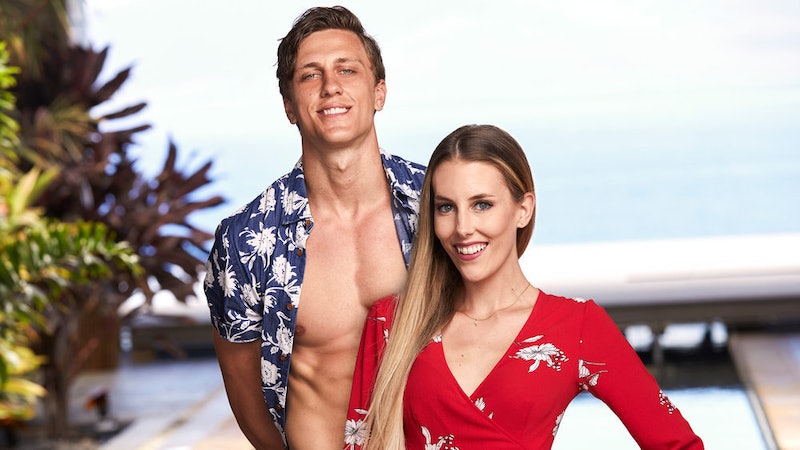 On Temptation Island, anything can happen. And after the Feb. 5 episode, it's unclear if Kaci and Evan are still together after the show. As you might've anticipated, Evan and real estate agent Morgan are growing increasingly close, and he can't seem to resist exploring a potential romance with her. Meanwhile, Kaci is wondering if she made the right decision by bringing her relationship to the island in the first place.

Last week, Kaci had an epiphany. "I feel like we wouldn't be here if it wasn't for me giving him that stupid ultimatum," she said tearfully. Before coming on the show, Kaci felt pressured by her family to get engaged and start a family of her own, so she relayed that pressure to Evan. That's how they ended up on Temptation Island — to see if they were really meant to be, and figure out what was holding Evan back from proposing.

Now, Kaci is having second thoughts while Evan is embracing the experience with open arms, which understandably worries her. "He's not good with temptation," she said last week. "Like, he's cheated on me."

That aside, Kaci has learned some positive lessons from her time on the island. "I really didn't realize that I still have a wall up with Evan," she said on this week's episode. "If we get through this, I know I'll be able to let it down ... I could be more affectionate, not snap at him over stupid sh*t, because I have a wall up."

It's obvious that Kaci wants to make things work with Evan. She and Shari seem to be the two women who are most reserved on dates with the singles, and she talks about Evan a lot. Evan, on the other hand, seems to have all but forgotten about Kaci.

After sharing an initial first date, he and Morgan had an intimate conversation in the boys' villa's hot tub. "I'm honestly scared to take you on a second date," he told her. "I can't get a good read on you, honestly." Morgan made it clear that she wanted to be his only date for their remaining time on the island.

"What I feel with Morgan is real," Evan said. "And it is so wild to be in this position. I did not think I was going to be here." To shake things up even further, the guys decided to make a trade. They sent one of the girls home, and a new candidate, Lindsay, was brought onto the island. Evan's eyes widened when she stepped before them wearing a red sundress.

Oddly enough, Lindsay looked familiar to Evan, and it turns out that she just happened to be a Tinder match of his distant past — as if Morgan wasn't complicating things enough. Still, he returned to the villa to confess his feelings for Morgan, and the two kissed. "Morgan is absolute trouble," he said. "I feel like she's real but I'd be lying if I said it didn't make me a little nervous."

Hopefully, he goes with his gut and remembers what he and Kaci have gone through together. At the men's bonfire, where they are shown a clip of their girlfriends' weeks, host Mark Walberg asked Evan if he still felt a connection with his girlfriend. "Absolutely," he said. "We've been through so much. She's been through me losing my pops and everything in between, but I'd be lying if I said I didn't want to explore things with Morgan."

Neither half of the couple have addressed on social media whether or not they're together now, but it doesn't exactly look promising. Aside from promo for the show, they're both almost entirely absent from each others Instagram feeds (and Kaci's goes back several years), while Evan vaguely captioned a clip from the show, "Will a trip to Temptation Island help with our commitment issues? Or just make them worse?"

Kaci also recently did a Q&A on her Instagram stories and someone asked if she's single. "Ha! Think I would give it away that easy?" she wrote. Darn — at least someone tried.

For now, she's staying busy with her fellow Temptation Island ladies. They call themselves the Fab Four and have a group chat (of which she often posts screenshots) called "Hard Ice." So if she didn't keep Evan after enduring the ultimate relationship test, at least she got some lifelong friends.

More like this
Only 3 Of The One That Got Away Couples Seem To Still Be Together
By Brad Witter
Bachelor Nation's Blake Horstmann Is Dating 'Love Is Blind' Star Giannina Gibelli
By Jake Viswanath and Radhika Menon
Everything We Know About Gemma & Jacques’ Relationship – & Break-Up
By Frances Stewart
The 'Love Island' Contestants *Do* Know Who Gemma's Dad Is, After All
By Bustle UK
Get Even More From Bustle — Sign Up For The Newsletter