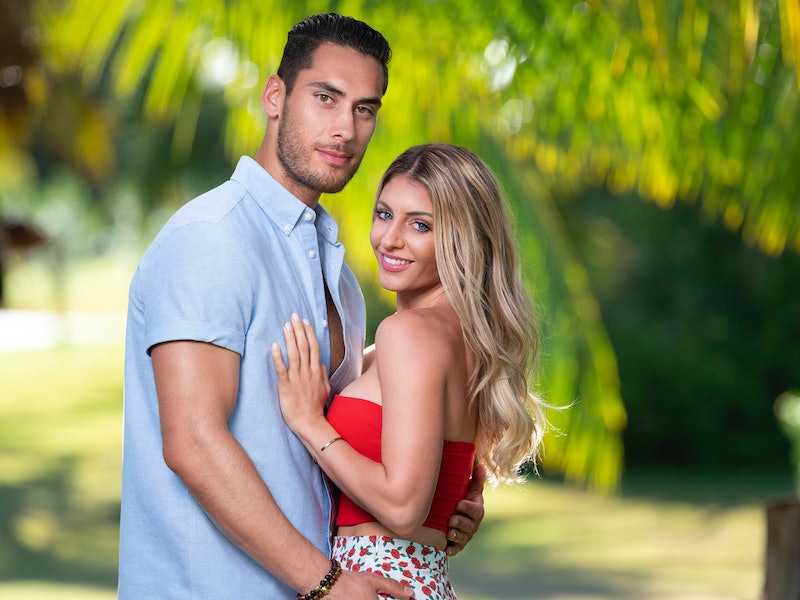 Spoilers ahead for Episode 4 of Temptation Island Season 2. The ending of Temptation Island's Oct. 31 episode was nothing short of jaw-dropping. After spending a lot of time flirting with Toneata, David ended up having what seemed to be a threesome with Samantha and Payton, which makes it feel increasingly unlikely that David and Kate are still together after the show. Kate already wasn't happy about David's steamy hot tub massage from Toneata or his admission that he downplayed his connection with Kari on purpose, and this crosses a line she may not be able to forgive. However, there's actually reason to believe they made it work.

On social media, both David and Kate appear to be pretty single; their Instagrams are both filled almost exclusively with solo photos. But there's more of a story here than the posts themselves. Not only are Kate and David following each other on Instagram, they're also "liking" almost all of each other's photos. Unless they just happened to have a super amicable breakup (unlikely, given the circumstances), that certainly points to boyfriend-girlfriend behavior.

Furthermore, David isn't following any women from the show, or any women in general. He only follows Kate and the rest of the Temptation Island boyfriends: Casey Starchak, Gavin Rocker, and Rick Fleur. In contrast, all of the other guys are following at least some of the singles who were a part of the cast (though for the record, David just joined social media on Sept. 17, so maybe he just hasn't gotten around to it). It's also curious that neither Samantha, Toneata, or Payton follow David on Instagram. At the very least, it doesn't seem like he leaves the island with one of them.

As of publication, Kate and David haven't commented on each other's posts recently. However, they did both post photos from Los Angeles, California, even though they live in Hoboken, New Jersey. Kate posted some pictures on Oct. 20 and Oct. 22, while David shared a photo on Oct. 21. They're alone in the shots, but maybe that's because they were taking the photos for each other. It seems too big of a coincidence that they just so happened to be in L.A. at the same time, though they could've been there to promote the show.

We've yet to see how Kate will react to David cheating on her, but right now, all signs point to them getting past it.