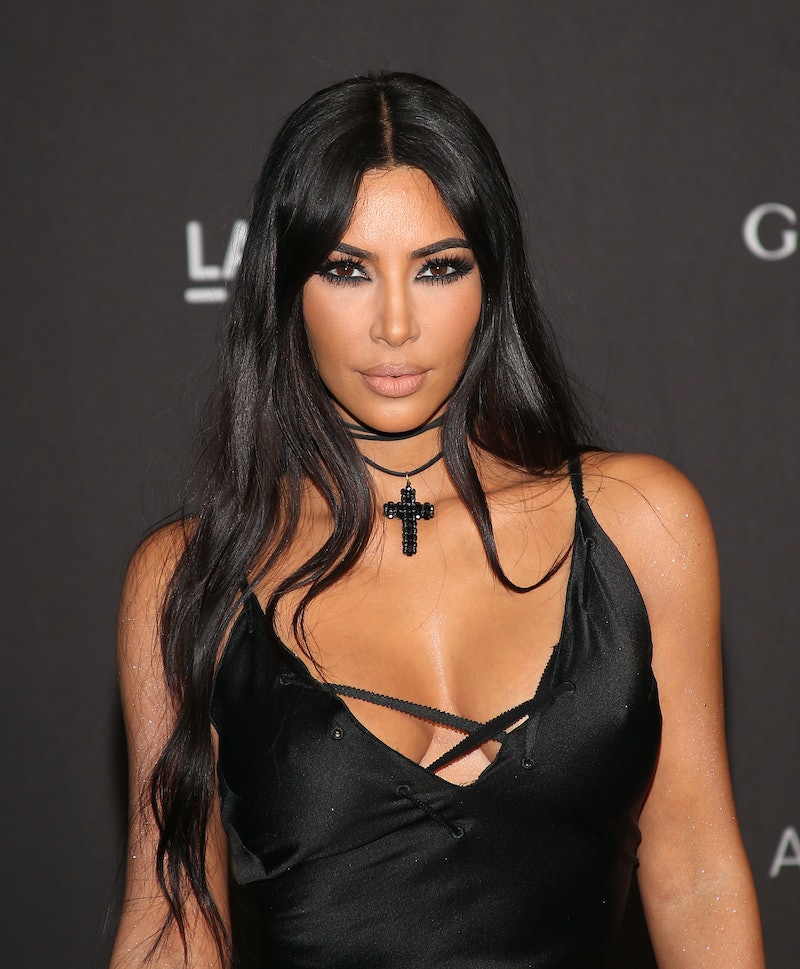 Kim Kardashian has a lot of famous friends, and her latest tweet to one of them is getting fans excited. On Monday night, Kardashian tweeted about Grande, and what she said has left people with more questions than answers. What did she mean by her tweet? Are Kardashian and Grande friends? And although that first question is still somewhat of a mystery, the answer to the second is clear: Yes, at this point, it definitely seems safe to assume that Kardashian and Grande are in friend territory.

It all started when Kardashian tweeted the most vague thing ever: "I just witnessed the best funniest thing OF ALL TIME OMG." And then she tagged Grande, with absolutely no explanation — and so far, the singer herself isn't spilling any beans, either.

That could mean literally anything, so what is she talking about?! In the replies to her tweet, it's clear that people are just happy that Grande and Kardashian are interacting, regardless of what it might mean... and being that Kardashian has always been very intentional with her Twitter presence, she must be being vague for a reason. It seems like whatever she's referencing is probably something that fans will find out eventually.

The most likely explanation: It's something that she's been working on this week which could likely be the music video for "Thank U, Next." A lot of fans suspect it will be Mean Girls-themed, since Grande's most recent tweets and Instagram posts have featured quotes from the movie. Whatever it is, it's something big, because in the wee hours of Tuesday morning, Grande tweeted:

"i don’t know if i’ve ever been this exhausted. ever. but these last three days were the most fun i’ve ever had. period."

So what's the deal, Grande? Did you give Kardashian a sneak peek of your music video? Is she making a cameo in the actual video? What is her tweet talking about?

These questions remain unanswered, but it's not surprising at all if Kardashian is involved, because these two have been in each other's orbit for awhile now and seem to have gotten a bit closer in recent months. Back in 2016, Grande posed for a photo with Kardashian and her sisters, Kendall and Kylie Jenner:

And in April 2017, Kardashian took daughter North West to see Grande in concert, and tons of adorable photos from backstage ended up on Kardashian's Snapchat. Then, when Grande's most recent album, Sweetener, was released in August, Kardashian shared a video of herself listening to the title track, which prompted Grande to say that Kardashian is "the prettiest person I've ever seen."

And of course, Kardashian responded by telling her that she was listening to her album on repeat.

Maybe this was the exchange that prompted Grande to involve Kardashian in whatever it is that she's tweeting about? Hopefully, one of them will update the rest of us on what's going on soon.

But if Kardashian is involved in the "Thank U, Next" video, we have a feeling that she will, once again, break the internet. After all, it's already everyone's current favorite song.