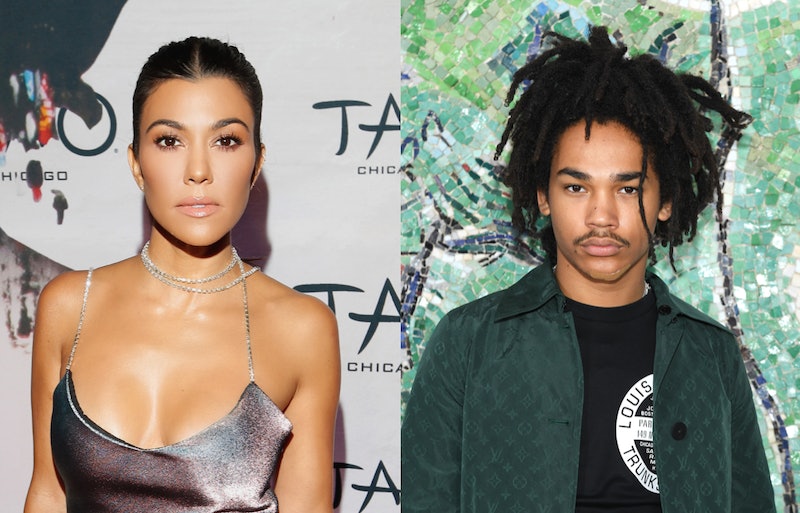 There may be a new man in Kourtney Kardashian's life, based on multiple reports from sources such as Us Weekly and Page Six. According to the outlets, the reality star is supposedly moving on from ex-boyfriend Younes Bendjima with an actor from Freeform's grown-ish. So, are Kourtney Kardashian and Luka Sabbat really dating? Let's examine the evidence. (Bustle has reached out to reps for both Kardashian and Sabbat, but did not receive an immediate response.)

An insider claimed to Us Weekly that things are starting to get serious between the pair: "Kourtney and Luka are exclusive and are edging toward becoming boyfriend and girlfriend." The source continued, "They say they’re taking it slow, but they’re moving faster than that in actuality." They went on to note that the 20-year-old is actually a friend of the family's, as Sabbat is already close with Kendall Jenner. "They’ve been inseparable. He’s met [Kourtney's] kids before from being friends with the family, so it’s not like she’s introducing a new guy in their lives like she did with Younes [Benjima]," the source also said.

This news comes shortly after it was rumored that the pair was together. Although, at the time, sources denied that there was anything romantic going on between them. After Kardashian and Sabbat were spotted out at dinner on Sept. 14, a source clarified the state of their relationship. "Kourtney has known Luka forever," a source told Us Weekly, "He’s a friend of the entire family and always hangs with the girls. There is nothing romantic going on.”

In addition to their dinner, they were also spotted out and about on Sept. 15 at the opening of TAO Chicago, according to an article published by People on Sept. 17. A source revealed to the publication that Kardashian and Sabbat had been dating for about a month at that point, "All of their friends know she’s [Kardashian's] head over heels for Luka."

Given this latest update, you may be wondering: Who is Sabbat exactly? As previously mentioned, the actor is a good friend of the KarJenner crew. As E! News noted, the Keeping Up With the Kardashians star met her rumored beau through her supermodel sibling, Jenner. He's apparently been friends with the family for some time, with the grown-ish star even attending the family's Labor Day party recently.

The news about Kardashian's possible new flame follows her recent breakup with her longtime (now ex) boyfriend, Bendjima. According to E! News, the pair broke up in August after nearly two years of dating. A source revealed to the publication that the couple was going to go on a break, but they eventually decided to part ways for good.

Now it appears that the reality star is really moving on following her split from her ex-boyfriend, if these recent relationship reports are to be believed. Bu until either Kardashian or Sabbat confirm things themselves, all of the famous reality star's fans will probably just continue speculating about her supposed new romance.