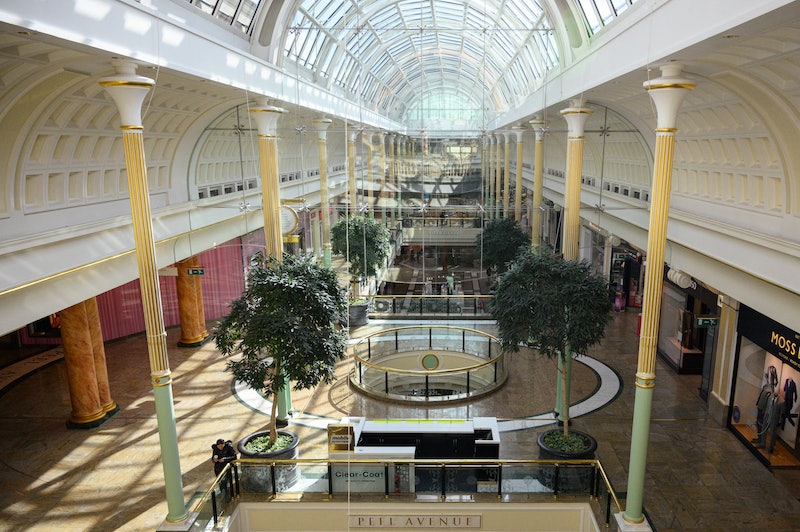 Just a week after the UK began reopening its stores and non-essential shops, some of the country's largest shopping centres could be in trouble. According to recent reports, Britain's biggest mall owner, intu, is "likely" to go into administration after failing to reach "a debt standstill deal with its creditors." Intu's shopping developments, including Manchester's Trafford Centre and Lakeside in Essex are at risk of temporary closure as a result.

The company has been hit hard with a staggering net debt of around "4.69 billion pounds" and failed to reach a deal with its creditors "before Friday's deadline," says Yahoo Finance. They have until midnight to reach a deal (June 26).

Intu is said to have been in "crunch talks" with lenders all week "to secure vital breathing space."

While Intu owns some of the country's top 20 shopping centres it "has been struggling to cope" with the shrinking retail market "for some time."

Via Manchester Evening News, if the company went into administration, without critical up-front funding from its lenders there is a risk that centres may have to close for a period” as a result.

The coronavirus pandemic put a further strain on the company's finances after lockdown forced retailers to shut shop for three months.

It's a major blow for Intu which employs around 2,600 staff and gets millions of visitors to its shoppings centres every year.

The company shared a statement earlier this week revealing "discussions have continued with the intu Group’s creditors in relation to the terms of standstill-based agreements. Unfortunately, insufficient alignment and agreement has been achieved on such terms."

“The Board is therefore considering the position of intu with a view to protecting the interests of its stakeholders. This is likely to involve the appointment of administrators," the company added. “A further announcement will be made as soon as possible.”

More like this
Boris Johnson’s Leadership Is In Question – Again
By Bustle UK
Windrush Victims Are Still Waiting For Compensation
By Sam Ramsden
What Is Happening With Sheku Bayoh’s Case?
By Sophie McEvoy
Mollie King & Stuart Broad Have The Most Relatable Wedding Plans
By Sophie McEvoy
Get The Very Best Of Bustle/UK