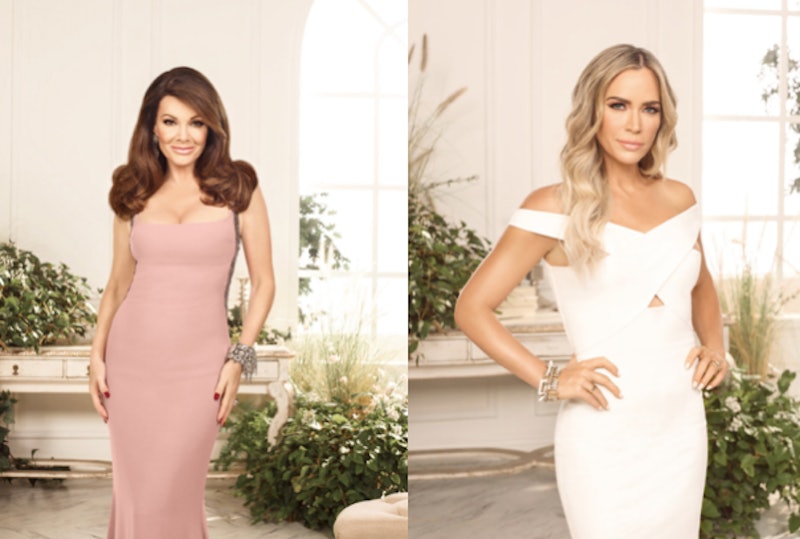 Last season Lisa Vanderpump and Teddi Mellencamp Arroyave bonded over their love of horses. Lisa even referred to her as her "little Teddi bear." Well, that was so last season. Thanks to the Dorit Kemsley dog drama, Teddi and Lisa are at odds. But where do they stand now? Are Lisa and Teddi friends today? It sure doesn't seem like it. Unless they are just very good at speaking in the past tense to align with the episodes airing.

During the March 5 episode, Teddi insisted that she knew it was "one hundred percent a setup" during a post-golf conversation with Erika Jayne. She even confronted Lisa about it in the Bahamas, but the truly shocking moment came at the very end of the episode.

Lisa's husband Ken Todd pulled out some printed texts between John Blizzard, a Vanderpump Dogs employee, and Teddi. Allegedly Teddi wrote, "have the dog there and I can say it looks like Dorit's dog." Talk about a jaw-dropping moment. Ken came through with the receipts, to say the very least.

Of course, there are still plenty of episodes left to see how this all plays out, but it seems very unlikely that Teddi and Lisa are actually friends at this point in time.

Teddi posted and deleted a controversial post on Instagram before Season 9 even started. Teddi reportedly shared a photo of the whole cast with a stand-in where Lisa was photoshopped in, supposedly indicating that she was clearly not there for the shoot. During the Feb. 7 episode of Watch What Happens Live, a caller asked why Teddi did that, Teddi confessed that she posted it "to be shady."

Now that the season has started airing, Teddi has made it clear that she's not friends with LVP in almost every single post-episode blog post she writes for the network. In response to the first episode of the season, Teddi hinted at animosity toward LVP in her Feb. 12 Daily Dish blog post, writing:

"It’s like Lisa Vanderpump is saying one thing but means another. Kinda like how we see her lunch with Dorit, and she says she’s fine but then isn’t. Strange. It's also odd how she says she's sorry she didn't speak to me at the Daily Mail TomTom even when she did--we even filmed a scene together."

In her Feb. 19 Bravo blog post, Teddi questioned Lisa's intentions during the dog drama. She wondered, "But then why does it seem like [Lisa] takes every opportunity to be passive aggressive with resentment in her words and actions towards Dorit?" She even theorized, "Lisa says she’s trying to protect Dorit, but it sure feels like she’s trying to punish her." Then, in her Feb. 26 blog post, Teddi claimed, "I know I have been used as a pawn to get the story about Dorit and the dog out there while LVP can pretend like she had Dorit’s best interests."

In that same entry, she declared, that the dog drama "all begins with Lisa Vanderpump, and I’m realizing she’s using me as the fall gal."

As of this moment, LVP hasn't commented on Teddi specifically, but she's not on the best terms with a majority of the Beverly Hills Housewives. In a Feb. 22 interview with Us Weekly, Lisa discussed the costars she is in touch with these days. Lisa revealed, "Denise Richards is always very kind and very sweet to me. She has always been and she texted me today and I definitely connected with her. Camille has always been lovely to me." No mention of Teddi.

She was probably including Teddi when she added, "But the rest, they kind of gang up." Not only that, but Lisa is not following Teddi on Instagram. However, Teddi is following Lisa. Awkward.

Considering that Season 9 just got started, there is a lot more drama to relive and it's only logical that they will both get riled up by past grievances they experienced during filming. Maybe they can make up at the Season 9 reunion taping or they can ride some horses together.