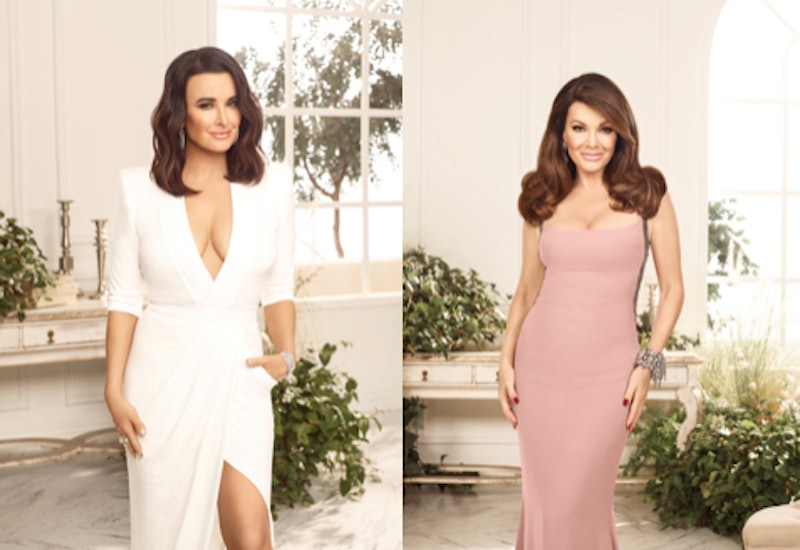 There’s nothing in this world that will last forever, even the closest and most intimate of Real Housewives friendships. When Real Housewives Of Beverly Hills premiered in 2010, Kyle Richards and Lisa Vanderpump were the best of buddies. They worked together, traveled together, and were on the same side of every fight (and since we’re talking about the Real Housewives, there were plenty of fights). But are Kyle Richards and Lisa Vanderpump still friends on RHOBH? We’re way past trouble in paradise.

The Real Housewives Of Beverly Hills Season 9 premiere starts with a bang — Lisa and Kyle are having a massive fight, and viewers don’t quite know why. We’ve seen them argue before, but nothing of this magnitude. Of course, all will be revealed as the show does its “four months earlier” flashback, but what could have made these two fight so viciously? In November 2018, rumors swirled that Lisa was leaving Real Housewives Of Beverly Hills. Lisa denied everything, saying that despite it being a “difficult” season for her emotionally, she wouldn’t put her tail between her legs and just walk away.

“Everybody's been talking about this. I've just been going about my business and doing my things," she told Entertainment Tonight. "I am in the show. I have not quit, and if I did quit, it wouldn't just be a leaked story. I would be up front, and I have a lot of loyalty to the production company and the network."

Could the rumors have something to do with her falling out with Kyle? According to People, Kyle and Lisa haven’t spoken for months. On Watch What Happens Live, Kyle admitted that she was thrown out of Lisa and Ken’s home and hasn’t been invited back. Lisa also isn’t responding to her texts, emails, or calls. “The last time I spoke with Lisa or Ken was when I was at their house and we were going to have a talk, and then it ended up being a disaster,” she told Andy Cohen. “When you’re kicked out of someone’s house … it was really strange for me because I’m so close with them.”

Lisa hasn’t said much in the public eye about Kyle, but Kyle is definitely doing the “we’re not friends anymore and I don’t know why” press tour. On a recent appearance on LIVE! With Kelly And Ryan, Kyle confirmed again that she and Lisa are not braiding each other’s hair and having sleepovers. Heck, they’re not even talking. She said:

Kyle is on the outs with both Lisa and Ken Todd, Lisa’s husband, and no fans quite know why. Lisa is seen calling someone a “f*cking b*tch” in the trailer for Season 9, so there’s a good chance that could be Kyle. And it’s all a real shame, because they were once so close. But if fans know anything about the Housewives, it’s that all will be revealed eventually. Oh, and all this drama will make for one hell of a reunion special (or four).