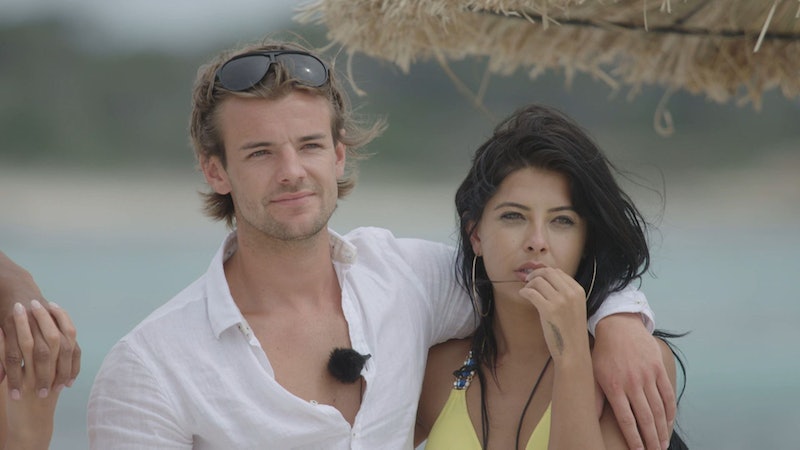 Love Island 2018 really convinced us that the summer of love cliché is all real. The lovebirds had themselves and us convinced that they'd found their match, but as the weather turned colder and dimmer back home in the UK, so did the romance sparked in the sunny Love Island villa. As you might already know, none of the contestants from the latest edition of Love Island remain together, so now that a new season is about to roll back around, I'm searching for hope in older seasons. Like, are Love Island's Nathan and Cara still together? If they are, it could restore my hope for this next season.

Fortunately, things still very much seem to be on for these islanders. In fact, the couple even returned to the villa in 2018, and Nathan proposed to Cara at the place where it all began, as OK! reported on July 26, 2018. Details of the upcoming wedding have only just started to be revealed, including Cara's dress, which she wrote about in her column for OK! on Weds, May 29:

"Everyone had always told me that whatever dress you have in mind, you won’t end up with. I chose two completely different dresses and loved them both. I went with my two bridesmaids and my man of honour, but I let my mum have the final decision. It’s so different to what people are expecting — it’s such a pretty dress. I didn’t want to look too sexy, as I have all my family there — it’s a day to wear something you’d never ever wear."

According to The Sun, the wedding will take place in July, with celebrity guests including Stacey Solomon and Joe Swash set to attend, alongside fellow Love Island contestants Scott Thomas and Rykard Jenkins. As Digital Spy reported on Saturday, May 18, The Only Way Is Essex's Tommy Mallett is due to be Nathan's best man. The couple have made a few appearances on the Essex-based reality TV show, but TOWIE alums won't be playing the starring role at this wedding. That honour goes to the couple's son Fred, who was born on Dec. 13 2017, the Daily Mail reports.

"Fred will be a big part of it. We’re not sure about other page boys and flower girls as we want it to be quite small and intimate, and we’re allowing everyone to bring their kids anyway," Cara told OK! in an interview from Dec. 10, 2018.

And, as Cara also revealed in her December interview with OK!, Fred might find himself becoming a brother after the wedding bells have stopped ringing. "By the end of next year I’d like to be pregnant. I love being pregnant. I miss my belly," Cara told the magazine. So, it looks as though the Love Island babies are going to keep on coming. I kinda hope that it'll bring on a big baby boom among the islanders. Who knows? This time next year maybe we'll be seeing some 2019 Love Island babies popping up on Insta. OK, maybe I'm getting ahead of myself.

This article was originally published on May 30, 2019