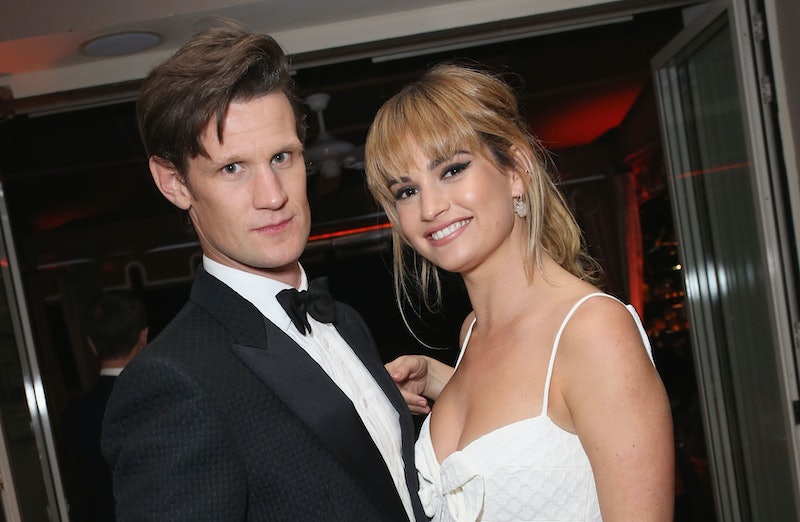 Matt Smith and Lily James have to be one of my favourite celebrity couples at the moment. They're cute, humble, and seem genuinely in love. So the idea of these two being engaged is enough to get me seriously excited. But are Lily James and Matt Smith actually engaged?

The reason for the suspicion is due to a number of factors that have provoked questions about the couple's relationship status recently. Take exhibit one, for example: the ring. Back in February 2018 at the BAFTAs, Lily donned a totally stunning strapless black dress, huge earrings and, perhaps most notably, a hefty diamond on her ring finger. Interesting...

Many took this incident to mean the pair had taken their relationship to the next level. Some fans even took to Twitter to congratulate the couple. Bit premature, perhaps?

Well yes, in fact. When quizzed about her ring by Porter, Lily appeared to quash rumours of an engagement pretty quickly. Sob. "I’m just not very superstitious about rings," she told the magazine. "It’s stupid, probably, but I just put rings on any finger...I mean, Jesus. That ring’s worth one million pounds…"

Ok, I take her point. I can even relate, being the owner of a super cool skull ring that I designed especially for me only to discover upon it arriving that it would fit on my ring finger and my ring finger alone. I wear it there every day but it doesn't mean I'm engaged, right? Ok, you got passed that one, James.

On to exhibit 2: the wedding dress. This sounds a lot more incriminating than it actually was, if you ask me. Pictures surfaced back in May of James wearing a wedding dress and veil with her friend Emma Freud. The event in question? The royal wedding of Prince Harry and Meghan Markle.

Despite this, fans went bananas for what they interpreted to be a foreshadowing sign that Lily was set to be wed. Forgive me if I'm wrong, but weren't half the population dressing up as brides that day? Maybe I'm just a cynic, but I can't see either of these so called signs that a wedding is on the horizon as iron clad. That said, I can't help but hope maybe, just maybe, I'm completely wrong and the pair are walking down the aisle oh, I don't know, as we speak right now?

I reached out to the couple's reps for comment. So, can I hear wedding bells? To be honest, I'm not sure as the spokespeople are yet to get back to me. But, I suppose no news is good news, right? Right?

James and Smith first met while on set of Pride And Prejudice and Zombies, my favourite Pride and Prejudice flesh-eating spin-off (is there another one?), as reported by Grazia. The couple took to the red carpet together for the first time at Cannes Film Festival in 2014 and were spotted kissing in public later that year, despite not addressing dating rumours. The pair have been serving up couple goals and all the cuteness since, both on red carpets and while out and about together.

Despite little fuel added to this fire, I'm not losing hope that an engagement could be on the cards. Pretty please can I be bridesmaid, guys?

More like this
Laura Anderson Pulled The Ultimate Girl Power After Her Break-Up
By El Hunt and Megan C. Hills
Maya Jama Addressed Those “Silly” Dating Rumours In The Most Iconic Way
By Bustle UK
New Details About Jeremy Renner's Snowplow Accident Reveal The Actor's Intentions
By Sam Ramsden
Paris Hilton Just Shared The First Photo Of Her Baby
By Sam Ramsden
Get The Very Best Of Bustle/UK
Sign up for Bustle UK's twice-weekly newsletter, featuring the latest must-watch TV, moving personal stories, and expert advice on the hottest viral buys.