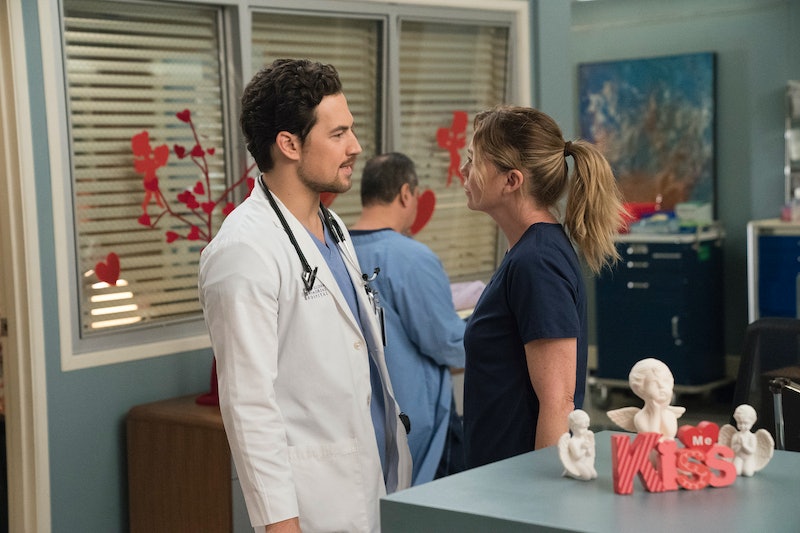 Spoilers ahead for Season 15, Episode 12 of Grey's Anatomy. Did Meredith's love triangle just shrink to a line? DeLuca and Meredith kissed on Grey's Anatomy, and she stood Link up to do so. Now it sort of seems like the battle for her affections may have been won by DeLuca — but it may not be that simple.

It sure seemed like Link was over it when Meredith stood him up on Valentine's Day. He angrily told the waiter at the restaurant that he was done waiting — both to eat, and also seemingly for Meredith's affection. But let's not forget that DeLuca forgave Meredith for standing him up on New Year's Eve (Mer's not good at holidays), so perhaps Link will do the same. Besides, Meredith had a good excuse for initially missing her date with Link — she was attending the last minute wedding of her dying coma patient. Sure, then DeLuca stole her away for a toast and a kiss on the roof, but she was working at first.

According to the ABC press site, the next episode synopsis also reveals that Meredith is still fretting over her love life. It reads, "A blast from the past throws Maggie off her game on the same day that Meredith tries to talk to her about her dating situation." Is that "situation" the still-present love triangle? It seems like it, according to Giacomo Gianniotti, who plays DeLuca. He revealed to Hollywood Life that the cast was still filming love triangle-related scenes through Episode 15. That's still three episodes away.

"We’re [currently filming episode 15 and] continuing to explore both [relationships]," Gianniotti told the outlet. "It’s kind of a little bit like a chess game of one moving forward and the other one moving forward in this slight lead, and then another person catches up and then the other person’s in the lead for a bit and we’re sort of riding this fine line of a race."

So DeLuca may be in the metaphorical lead right now, but that doesn't mean he'll stay there. After all, it's one thing for Link to be mad at Meredith for not showing up. But then he'll probably see her in the halls and be wooed by her Meredith awesomeness once again. And back into the battle he'll go.

But when and if it does come time for Meredith to make a true decision between the men, it's pretty likely DeLuca will win her heart. He's known her for longer, and he knows that she can be a little flighty when it comes to romance. He knows she'll sometimes stand you up to work, and he knows he can't get too mad about that. She's Meredith. It's just part of her charm that her family and her job often come before her dating life.

And DeLuca isn't scared of any competition for her heart, according to Gianniotti. "I think DeLuca is confident with what he has to offer," the actor told Entertainment Tonight. He added:

"They spent that time in the elevator together where he revealed a lot about himself and opened up and was vulnerable, which she found beautiful and attractive that he felt safe enough to be open and vulnerable around her. I hear that that’s an attractive quality to women — men who talk about their feelings and aren’t this iron-clad gate who don’t talk about their emotions. That’s something positive about him and we’ll see where it goes."

But no matter where this love triangle does go, it seems it won't conclude until at least Episode 15. So get ready for more moody Link and DeLuca to come.