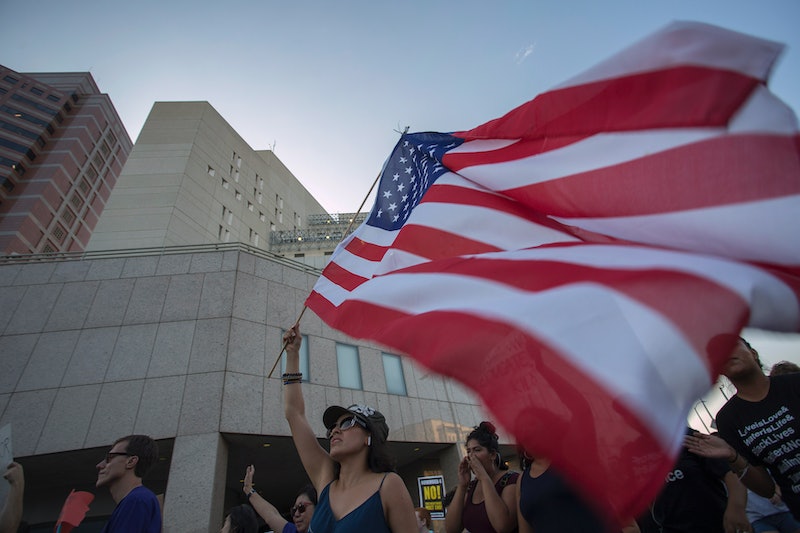 There's a lot of talk about gaining the millennial vote in any given election these days, but a recent survey of the coveted group showed that neither party has exactly done a smashing job. Of the two parties, though, the GOP especially won't like these millennial survey results — and the president will like them even less. The survey also reveals, however, that while more than millennials lean toward one party and away from another, they lean away from the two-party system in general.

NBC News and GenForward conducted a survey of racially diverse millennials, ages 18-34, focusing on their feelings toward various aspects of the American political system. When asked about how they feel about the Republican Party, a paltry 5 percent marked "very favorable," while another 21 percent felt "somewhat favorable" toward the party. Only 28 percent thought that the GOP cared about them.

The Democrats came off looking better, with 10 percent of millennials feeling "very favorable" about that party and 34 percent "somewhat favorable." Fifty-three percent said that they thought the Democratic Party cared about them.

The telling question, though, came when the survey asked whether "the Republican and Democratic parties do an adequate job of representing the American people, or [if] they do such a poor job that a third major party is needed." In response to that, 71 percent of millennials said that a third party was needed.

Compare this with the general election results, in which under 6 percent voted for a candidate besides Clinton or Trump. Also notable is the fact that 31 percent of survey respondents reported that they had not voted in the election, but that's more or less in line with the very low turnout that the 2016 election had overall.

Part of the millennials' failure to turn out likely came from their feelings toward the candidates; not many millennial supporters of Clinton or Trump reported feeling "excited" about their choice of candidate. In this latest survey almost a year into Trump's presidency, however, Trump comes off looking particularly bad. Only 22 percent of respondents said that they "somewhat" or "strongly approved" of the job Trump is doing, whereas 46 percent said that they strongly disapproved, with another 17 percent saying that they somewhat disapproved.

Trump frequently boasts of his supposedly high level of achievement in comparison to other presidents, but according to this survey, millennials don't see it that way. Only 14 percent believe that he will be remembered as a "good" or "great" president, whereas a full 50 percent believe that history will remember him as a "poor" president. This could be because of what millennials believe are the greatest problems facing the country, which according to the survey include health care, racism, the environment, and education. The only issue that both Trump and millennials seem to deem important is terrorism and homeland security, but that's apparently not enough. If Republicans — or indeed Trump himself — would like to expand their base, a quick look into this survey could prove very enlightening.