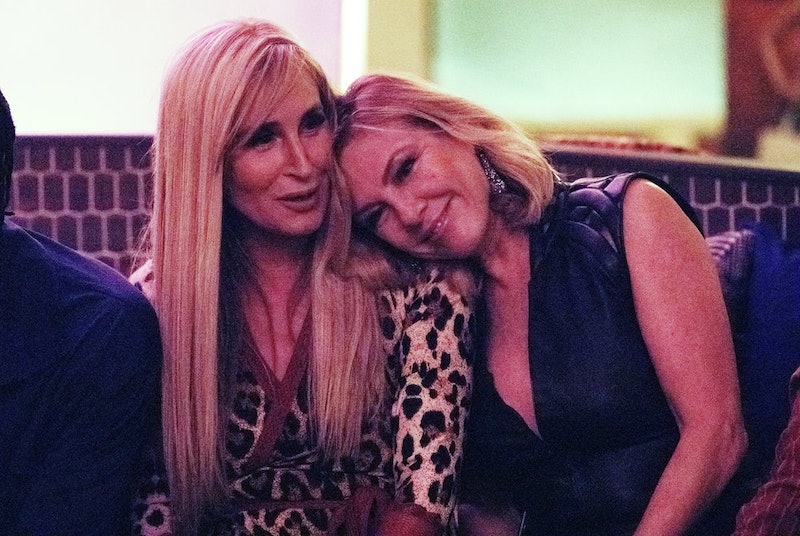 Relationships are hard, and relationships on TV are even harder. It seems that the second any Housewife on Bravo’s Real Housewives franchises renews her vows with her spouse, they’re also about nine minutes away from announcing their “amicable separation.” It’s what happened to Ramona Singer on Real Housewives Of New York. Luckily, Ramona and her ex have found some peace and the two of them are so friendly these days that anyone would be right to wonder if Ramona and Mario are back together on RHONY or if they're just doing their best to get along and honor the past that they shared together.

Ramona and Mario started having trouble after Page Six reported in October 2013 that Mario had been seen with another woman in the Hamptons and that he had reportedly paid for the woman to have an abortion after she became pregnant. At the time, E! News reported that the Page Six item was the first time that Ramona heard about her husband being reportedly unfaithful. Ramona also reportedly caught Mario with Kasey Dexter, according to People. After that, the couple divorced.

Over the past five years, Ramona and Mario seem to be co-parenting Avery quite successfully. Any appearance Mario has made on Real Housewives Of New York has been pretty amicable, between him and Ramona and even the other women. They all used to be close friends, right? They're a good example of how to behave as a divorced couple. They still seem to have that fire chemistry from their marriage.

Ramona has recently been seen locking lips with Housewife-lover Harry Dubin, and Mario has broken up with Dexter, but is there a chance that Mario and Ramona are getting back together?

Some of the Housewives insist that Ramona and Mario have been at least physically involved since their divorce, but let's hold up a minute. Ramona insists that there's nothing left of their romantic relationship. “You know being with Mario, filming with him, it’s just kind of deja vu,” she told Entertainment Tonight.

She added, “Mario and I are in a very good place. We’re friends... he was a really great husband and father for so many years, he really was, that’s why we were married for over 20 years.” Ramona also told Andy Cohen on Watch What Happens Live! After Show that she was over truly it. "I could never be with him again," she said. "What we had was very special and very good, but you know, things move on.”

For now, we'll just have to take Ramona's word for it that she and Mario are truly done. It makes sense that she might feel like getting the trust back with him would just be too hefty a task. Still, that doesn't mean that they don't still love each other deep down and want to make things work for the sake of Avery. And if they have been together now and again since their divorce, that's really nobody's business. Not that that will stop anyone from speculating,