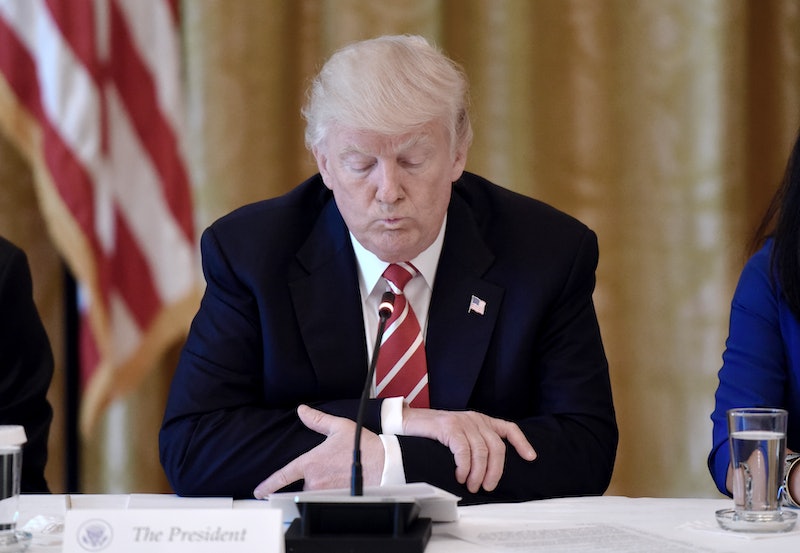 The inquiry into potential Russian interference in the 2016 presidential campaign has become one of the most talked-about political topics of the year, but the administration seems to look at the situation differently from many Americans. Donald Trump is concerned about Robert Mueller and James Comey. He may not have as much to worry about there as he thinks.

"He's very very good friends with [James] Comey, which is very bothersome, but he's also... We're going to have to see, I mean, we're going to have to see in terms... Look, there has been no obstruction, there's been no collusion..." Trump said in a clip from an interview that aired on Fox News on Friday. "There's been leaking by Comey, but there's been no collusion, no obstruction, and virtually everybody agrees to that, so we'll have to see. I can say that the people who have been hired are all Hillary Clinton supporters."

Trump's claims are misleading in a few different ways — firstly, he doesn't speak with a lot of nuance, so it's difficult to gauge from here how big a problem Mueller and Comey's relationship actually is. Just as the American people wouldn't want a special prosecutor to be biased toward the president in a case as vast and consequential as this, allegations of non-neutrality against Mueller should be taken just as seriously. But it's doubtful how close Mueller and Comey are really, or whether they're actually friends.

According to CBS News, the two men have crossed paths professionally on a number of occasions, including when Comey was deputy attorney general and Mueller was leading the FBI. But after Breitbart reported that Comey and Mueller were "the best of friends," Comey's attorney stepped in to set the record straight.

"Jim and Bob are friends in the sense that co-workers are friends. They don’t really have a personal relationship," David Kelley, Comey's attorney, told Snopes.com. "[Bob] is not a mentor. He’s friendly, as colleagues are."

Trump also claimed in the clip that "all" of the staffers that Mueller has hired to assist him in the investigation are Hillary Clinton supporters. He didn't make any deference to the fact that an investigation made by his political enemies is more trustworthy than stacking the deck with investigators who are partial to him. Instead, let's look at his assertion that the investigative team is comprised solely Hillary supporters.

Seven high-profile lawyers comprise Mueller's investigative team, with nearly a century of prosecutorial experience between them. Mueller has been a registered Republican, and only three members of the team have records tying them to support for Clinton or the Democratic Party. To top it off, according to ABC News, the Justice Department is prohibited from considering potential employees' political affiliation, so their appointments to these positions had to be as non-partisan as possible. Mueller was reportedly chosen for the special prosecutor position because of his history of practiced neutrality, meaning it doesn't matter much what Trump knows or thinks about Mueller's team's political affiliations.

Trump may consider turning his attentions toward the issues that most Americans have their minds on — namely, whether he obstructed justice. According to a poll conducted by the Associated Press last week, 61 percent of Americans believe that Trump obstructed the investigation into his campaign's connections with the Russian government. Forty-eight percent of those surveyed said they were extremely or very concerned that Trump and his campaign may have had inappropriate contacts with Russia. Meanwhile, Trump's comment about the "bothersome" Comey and Mueller are causing social media commenters even more concern about investigative interference. "If you've done nothing wrong, why would this be bothersome?," one user tweeted in reply to the news report.

Trump's motivation for the comments is unclear — maybe he's trying to sow seeds of doubt in Mueller's findings should they go badly for the administration, or maybe he's just repeating Fox and Friends talking points again. Either way, he may be doing himself more harm than good by inadvertently reinforcing the notion that he's got something to hide.