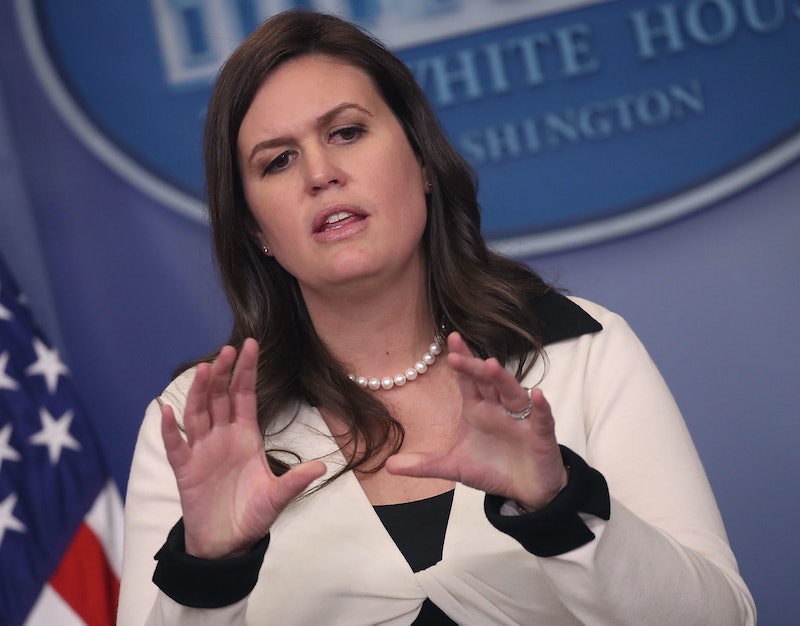 Many on President Trump's team today are individuals who were originally associated with one of his Republican primary rivals. Before Kellyanne Conway became a Trump regular, she worked for Sen. Ted Cruz's campaign. Before Gov. Chris Christie joined the Trump Train, he was himself running for the nomination. And prior to consorting with Trump's posse, Deputy Press Secretary Sarah Huckabee Sanders, as the daughter of Mike Huckabee (the former Arkansas governor, Republican presidential candidate, and Fox News host) worked for her father — so, no, their names aren't a coincidence.

As a prominent evangelical politician, Huckabee has long been in the spotlight. But his daughter's profile has risen since she started working under the Trump administration. In fact, some are speculating that we'll be seeing much more of Sanders. It's no secret that current Press Secretary Sean Spicer has shouldered his fair share of criticism since he started on the job — from Melissa McCarthy skewering his aggressive approach to pressers on Saturday Night Live to the internet explosion that followed his "hiding in a bush" moment on the White House lawn, Spicer has struggled to find his footing.

On Thursday, Sanders led a press conference that largely focused on Trump's recent firing of FBI Director James Comey. (As Spicer's deputy press secretary, Sanders is tasked with leading press conferences at the White House when he's gone; that day, Spicer was at the Pentagon on a Navy Reserve commitment.)

Democrats and those on the left were not impressed with Sanders' performance. For starters, she had informed reporters on Wednesday that Trump fired Comey strictly per the recommendation of Deputy Attorney General Rod Rosenstein. In a three-page memo to the president, Rosenstein had criticized Comey's handling of the FBI investigation into Secretary Clinton's private email server. Specifically, Rosenstein chastised Comey for speaking publicly about it, especially right before the election.

But then Trump appeared in an interview Thursday with NBC's Lester Holt, and said he would have "fired Comey anyway." Trump called Comey a "showboat" and a "grandstander," insults that are unusually personal coming from a sitting president. Of course, these are not anything out of the ordinary from Trump's Twitter feed, so perhaps his consistency in showing little regard for the reputation and dignity of regular citizens who also happen to be former employees of his government should not come as a surprise.

At any rate, Sanders had a tough time explaining why she had been mistaken in her original comments to the press, and why the president contradicted her comments to the press about Comey's firing. She later admitted that perhaps she was "in the dark" about Trump's real reasons for letting Comey go. But her slip-up isn't the first time the White House's mouthpieces have struggled to defend their boss; being press secretary for Trump seems like a rough job, whether your name is Spicer or Sanders.