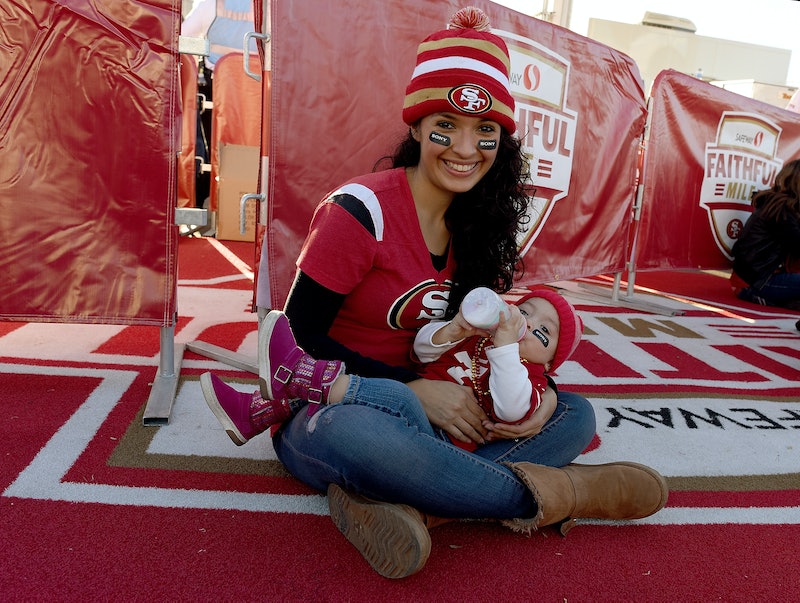 You could say that Americans get a little, er — passionate — about their football teams. Nothing quite encapsulated that passion like last year's Super Bowl 50 ad about Super Bowl babies, aka babies born approximately nine months after their parents' teams won the Super Bowl (bow chicka bow wowww, etc). It was actually super precious, with groups of Super Bowl babies singing together and repping their team in head-to-toe gear. But actually, for real, though — are Super Bowl babies real?

As adorable as the ad spots are (49-year-old Packers babies! One-year-old Seahawks babies! Be still my squishy heart), they don't actually provide many ~hard facts~ about this supposed rise in births, beyond saying that "data suggests" that they exist. And while the city of Denver reported the arrival of the Broncos Super Bowl win babies at the end of 2016, this also isn't, you know, #science. So while we can't really look at the data regarding the actual birth rates of babies born to Super Bowl winners, we CAN look at some important factors that may be involved in the conception and timing of these adorable wee creatures.

First off, yes, I whipped out a pregnancy calculator and fell on my sword for all y'all (because Poseidon knows that my newsfeed is going to be filled with ads aimed at expectant mothers for four to six weeks before Google realizes it was all a lie).

OK, so to make this, I lied and said that the date of the "mother's" last period was January 25. That gives her a fertility window between the Super Bowl and (ding ding ding!) Valentine's Day, and an estimated due date in November, which is exactly when the alleged "Super Bowl babies" arrived.

So clearly, the most important thing to note here is that Super Bowl babies? Could also very easily be Valentine's Day babies — that is, assuming both occasions went well for mom and dad.

That being said, if Valentine's Day babies were a "thing," we'd expect a rise in national births at large — and we don't actually get one. In fact, compared to other months of the year, November sees a relatively lower birth rate. So that (in a very rough, not at all statistically significant way, I mean come on guys) kind of debunks the idea that these kids were only born because of V-Day, lending some legitimacy to this theory, if there actually is data available to back it up.

One thing cannot be denied, though: even if the trend doesn't exist, individual Super Bowl babies certainly do. In fact, all of the people in the commercial were cast after being sent an e-mail to ticket holders looking for babies born the November after the Super Bowl win, and some parents fessed up right on the spot when they learned what it was for.

"It was pretty funny," said Amy Gandolph, the mother of Super Bowl baby Maddox, to CBS News last year. "He's definitely here because of the Colts winning the Super Bowl that year."

And even if there isn't data to support the trend, there certainly is biology to support it. Studies have shown that adrenaline increases levels of attraction, and there's no adrenaline quite like a Super Bowl victory. So November babies, maybe it's time to Google your team's Super Bowl wins and do a little math ... just in case.

More like this
11 Super Bowl Instagram Captions To Use On Game Day — Even If You Don’t Like Sports
By Alexis Morillo
The 2023 Super Bowl Commercials Feature A 'Breaking Bad' Reunion & Missy Elliott
By Alyssa Lapid
All The Ways You Can Watch The Super Bowl In The UK
By Asyia Iftikhar and Darshita Goyal
Pret & Costa’s Coffee Is The Strongest On The High Street, According To Which?
By Sam Ramsden
Get Even More From Bustle — Sign Up For The Newsletter
From hair trends to relationship advice, our daily newsletter has everything you need to sound like a person who’s on TikTok, even if you aren’t.