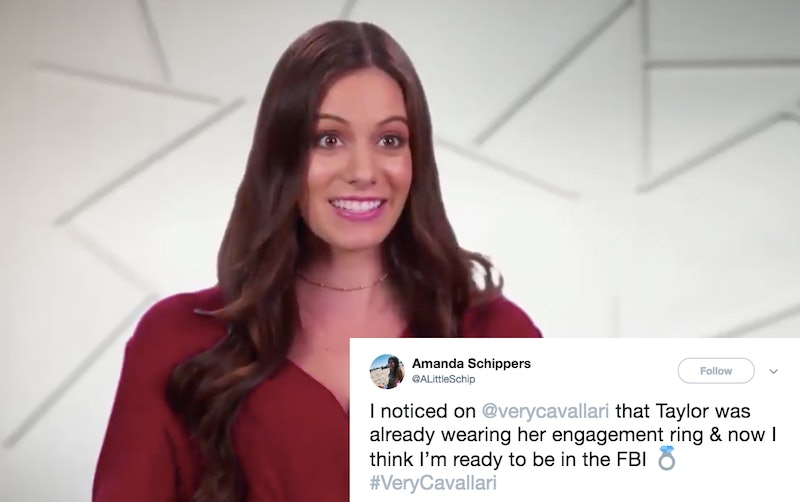 The family tree and timeline of events around the Uncommon James staff can seem complicated at times. With every episode of Very Cavallari that passes, you may be wondering to yourself, 'Who's dating who? Who's fighting with who? Who is her best friend?' Well, each cast member has a special role in this Very Cavallari story, including Taylor Monaco. In the most recent episode, after discovering that Taylor could be pregnant, fans watched Shannon, her BFF, help Tay's boyfriend plan the perfect marriage proposal. As you know, a significant amount of time has passed since filming the episode, so you may be wondering if Taylor and Mike are still engaged. Well, the answer is no, but not for reasons that may come to mind.

That's right — the happy couple is already married! If you're thinking all of that happened pretty quickly, that's because it did. So let's recap a quick relationship timeline, just so everyone's on the same page.

On March 7, Taylor shared that she was engaged on Instagram. On April 1, she announced that, "Plot twist," she and Mike were having a baby. On April 29, she posted an adorable pic of her and Mike enjoying pink ice cream cones to announce that they're expecting a little girl to be named Walker Rose Monaco. And on May 10, Taylor became Mrs. Monaco. Talk about a busy two months!

Taylor must've had an amazing wedding planner to pull off such a gorgeous wedding in such a short amount of time. She has shared a ton of wedding deets on her IG story highlights, including who did her makeup and hair and how she picked her dress. And she used the cutest wedding hashtag to reference her daughter joining the ceremony from the womb: #WalkerDownTheAisle. Her wedding photos? Flawless. Magical. All of the above. Shot by Janelle Elise Photography, the photos of Taylor and Mike's special day look like they belong in a bridal magazine.

All documented on her IG profile, since tying the knot, Taylor has moved out of her home and bought a new one with Mike, turned 25 (and had a super gram-worthy birthday party), got a brand new, fluffy golden retriever puppy named Gilford (brother to their older golden, Wilbur), and Mike surprised her with a 4-D ultrasound of their baby girl.

"I mean I thought mike grabbing the bandana this morning meant things were about to get sExYyyyyy," she wrote on Instagram, sharing a video of the big reveal. "Instead he blindfolded me and surprised me with friends and walkers face. That works too."

Can you say relationship goals? Their little family is due to expand in October. The two of them have been through so much together over the past few months, but it seems like they couldn't be happier. Taylor recently shared a photo of the two of them before their lives were picked up by an adult-ing whirlwind.

"Here’s a photo of me and @blackmike2309 before we had 2 dogs, a mortgage, a baby, joint bank accounts, and a shared closet," she wrote. "Somehow he still has a crush on me." How. Cute. A Very Cavallari spinoff that follows Mike and Taylor's beautiful life is what fans really need, but the remaining episodes of this season will have to do for now.