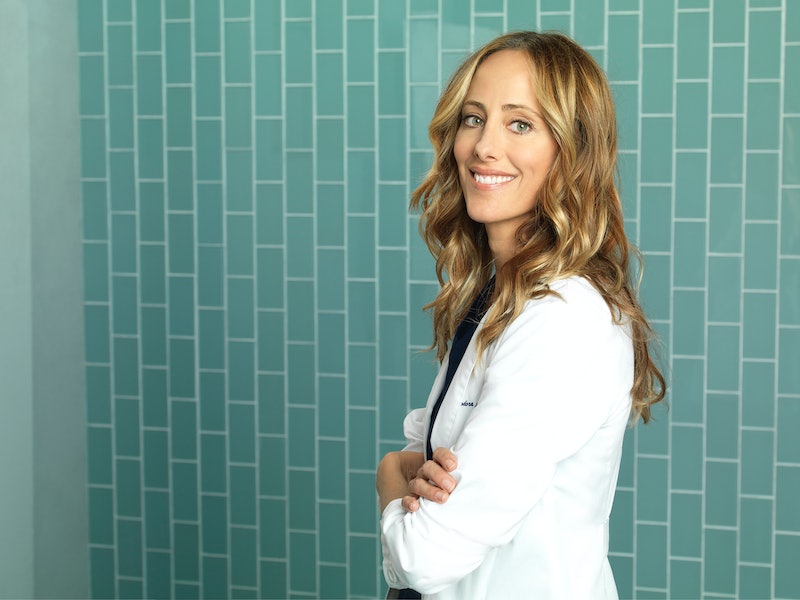 Spoilers ahead for Season 15, Episode 12 of Grey's Anatomy. She may be pregnant with his baby, but Teddy and Owen are strictly platonic at this point. Owen chose to stay with Amelia, although he is going to help co-parent his child. But now Teddy is free to date Tom Koracick on Grey's Anatomy, and they're honestly a perfect pair.

Koracick doesn't seem bothered at all that Teddy is pregnant with another man's baby — nor should he! It's 2019, folks. Women can (or at least, should) do what they want. But he's not only unbothered, he's also very attentive to Teddy's pregnancy needs. He recently brought her french fries when she was giving herself a foot rub in the break room and even fed them to her because her hands were busy.

Then, in the Feb. 7 episode, he brought Teddy to an amazing pedicure place to get a foot massage. (See? He's very in tune with her needs, and her needs are mostly foot related right now.) Then Koracick even got a pedicure with her, because why not? Men need nice, clean nails too.

But they're not just buddies who do a lot of feet-related activities together. There's real chemistry between the two. Teddy keeps Koracick grounded because she's able to poke fun at him and his giant ego. At the same time, Koracick helps Teddy get out of her own head and have some fun. You know who was pretty bad at fun? Owen. Teddy deserves Koracick's fun, flirty attention.

The duo's lighthearted dynamic stands out to the team behind the show as well. "They have a really fun energy," Co-executive producer Elisabeth R. Finch told Entertainment Tonight of Teddy and Koracick. "He is so unpredictable and unexpected, and I love how that confounds Teddy and delights Teddy, and I can't wait to see more of that."

That's right — more of that. Hopefully the Valentine's Day pedicure was only the start of what's to come for Toracick (Keddy?). After all, Teddy did invite him out for a drink in the previous episode. Koracick only declined because he'd just done a super long surgery. "I'm wiped. And I smell bad. And when you spend money on me, I want to smell good," he told Teddy. So a real date definitely seems in the cards for them soon.

So far Teddy and Koracick's budding relationship hasn't gotten much time in the spotlight, mostly because all the Meredith/DeLuca/Link drama has taken romantic precedent. And Owen and Amelia's struggles with Betty (or, I guess, it's Brittany now) have dominated storylines too. And then there's Catherine's storyline which has pulled focus as well. There's simply not that much time left for a non-drama couple like Teddy and Koracick. But hopefully they get their time to shine soon. The show could use a break from love triangle nonsense and the darker storylines. Teddy and Koracick bring a lightness to the show that it needs at times.

Plus, this is the Season of Love as showrunner Krista Vernoff dubbed it, so we need to see more of that love! Preferably between the show's new best couple — Teddy and Koracick. Now they just need to go on a real date to make it official.