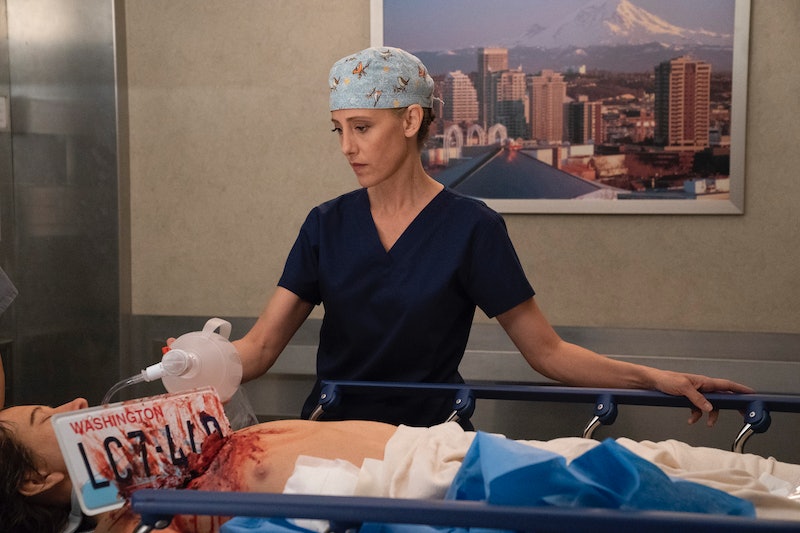 Teddy and Owen have had this unrequited love thing going on Grey’s Anatomy since, I don’t know, when was the day Teddy and Owen met? Even with Teddy gone from Grey Sloan, the most sensitive of viewers could feel her pining for him. At the end of Season 14, Owen, fresh off fighting with Amelia post-brain tumor, headed for Germany, and he and Teddy finally consummated their long-held relationship. Teddy realized afterwards that Owen is incapable of being by himself and she threw him out, but, it turns out, not before she got pregnant from their all-night tryst. She came to Seattle at the very beginning of the season, and it's taken her half a season to tell him about the baby. But when she finally did during the mid-season final, Owen’s response to the pregnancy news on Grey’s was pretty textbook when it comes to Owen Hunt. And that's not a compliment.

Owen showed up on Grey’s Anatomy as this hot, cavalier, military guy, which Cristina Yang was totally into. They had a relationship, even though Teddy was there, and then Amelia and Owen got together after Cristina left (even though that was only because of a brain tumor, but I digress). The one thread that Owen carries through all of his relationships is this element of scolding his partner or trying to convince her that she’s wrong or that her own agency is, somehow, incorrect.

He is categorically unfair to all of his partners. He told Cristina that she actually did want kids when she had already made up her mind about whether or not she was going to be a mother (hard pass). He also pressured Amelia to have kids even though she had a miscarriage and she was very apprehensive about a child carrying on her addictive genes. After years of fighting for a baby and trying to convince his partner that they could do it, Owen's response to Teddy about her pregnancy was literally, " You didn’t tell me you were pregnant? HDU.”

Teddy should have told Owen earlier that she was carrying his child, because that baby is probably like, full-term at this point. (Seriously, it might even be enrolling in kindergarten the way this season is slogging along,) But Owen’s reaction was that of almost blaming and shaming her. It’s not that Owen would be angry that Teddy is pregnant, because he’s always wanted children. He probably played “stay at home dad” with his sister’s dolls when he was growing up. It’s that he didn’t know Teddy was pregnant that’s the problem for him.

Owen loves to have agency, and he loves to wave said agency in his partner’s faces. In this situation, Teddy has the power because she has the info and Owen is stuck standing there in a broken elevator with his jaw hanging open. This is not something that Owen likes. Funnily enough, fellow self-absorbed male Jackson Avery picked up on that being the problem right away. Having overheard the confession, Jackson doesn't ask how, or when, they got together, but tries to cheer Owen up by reminding him that he was the last to know about Harriet, too. I get it — men want and often deserve to know when their partner is pregnant. But women, even a privileged, fictional women such as Teddy Altman, have very good reasons to take their time divulging the information, considering their emotional and physical safety. Judging by how Owen responded, now Teddy is going to have to feel guilty for not knowing what she wanted to do with the news on top of, well, being pregnant. Women do all the work.

But that's not all! Know who else is also in that elevator? Amelia, who is on a high from realizing that she wants to be Betty’s official foster mom. Yeah, yeah, whatever, Amelia, what you’re doing for the kid is great. But Teddy is carrying Owen’s biological child, which is something that’s never been done before.

A very real possibility here is that Amelia will bail on Owen to deal with Betty, because now that Amelia is a mom again, she doesn’t need to fill the Shepherd-shaped hole in her heart with dumb Owen Hunt. And Teddy could realize again that Owen sucks all of the air out of a room and decide to do this baby thing on her own. As viewers, we don’t know the aftermath of Owen’s reaction to Teddy’s pregnancy, but we certainly know enough to know that both women are probably better off without him.