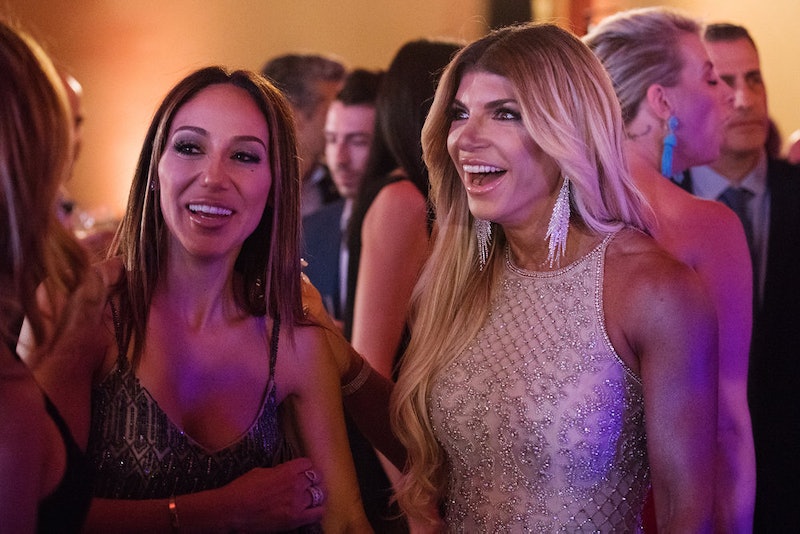 The Real Houswives of New Jersey fandom breathed a sigh of relief when sisters-in-law Teresa Giudice and Melissa Gorga made peace in Season 7. For two years, they were each other's strongest allies on the show. However, Season 9 wasn't the best for their relationship, to put it mildly. Are Teresa and Melissa on good terms after the reunion? Sure, there's been tension all season long, but the reunion felt like we were watching a flashback from the earlier seasons with Teresa and Melissa yelling at each other.

You could really cut the tension with a knife. During the Feb. 27 reunion episode, host Andy Cohen asked Teresa and Melissa if they would choose each other as friends if they weren't related. Sadly, neither of the women were sure how to answer. This is somewhat understandable after arguing for so many hours during the reunion taping. This prompted Teresa's brother and Melissa's husband Joe Gorga to strongly disagree. Aaaww.

Of course, he wants the two of them to be friends. It would probably make his life so much easier. Unlike the reunion, which definitely made everything a lot more complicated. Of course, the Season 9 reunion isn't done yet. There is still one more part. Nevertheless, things just don't seem great after Part 2 aired.

In a Feb. 27 interview with Entertainment Tonight, Melissa declared, "I think this is just from growth and it could come with age, but I'm done with the double standards." And, yes, this revelation is a result of the reunion taping. Melissa shared her post-reunion take away:

"It's like, you're gonna back Jennifer [Aydin] up, she's gonna break a glass in my face and that's gonna be fine, but Jackie [Goldscheider] can't say one thing [about Teresa]? Like, I'm done with that. So I'm now calling Teresa out on anything she says to me that's a double standard, because I'm not here for it any longer, I've outgrown that.”

Melissa told Entertainment Tonight, "We do have kids that love each other, we do love each other, we care about each other. Do we agree on everything? No, but do I think we're gonna be in each others lives forever? Yes.” Of course, but "forever" would be a lot better if Teresa and Melissa were getting along.

During the Feb. 20 episode of Watch What Happens Live with Andy Cohen, Andy asked Melissa, "What did Joe say was the cause of the most fights in your relationship?” Initially, Melissa went with an innocent answer: "Pet peeves? I run the water too much." What was Joe's actual answer? "Teresa." Yikes. That is not a great thing to hear.

Melissa discussed the reunion tension during the Feb. 21 episode of The Wendy Williams Show. She admitted, "I felt a little sucker punched that day, but we’re family. We’re sisters-in-law. This happens." Does it though? Or is this a more common occurrence on a reality TV show?

Melissa went on to explain, "And she didn’t tell me any of this was bothering her before we got to the reunion. So, that annoyed me." Later, guest host Heather McDonald told Melissa, "I think there’s still this jealousy with ‘you got on my show.'” Melissa didn't deny that. Instead, she said, "You might be right about that."

Unfortunately, it seems like there is still some tension between Melissa and Teresa. When it comes down to it, they are related and they will have to come together for family moments, but maybe they just aren't meant to be in the same friend group. Oh, wait, they're on a reality TV show, so that is not an option. At the very least, let's just hope they are able to peacefully coexist next season.