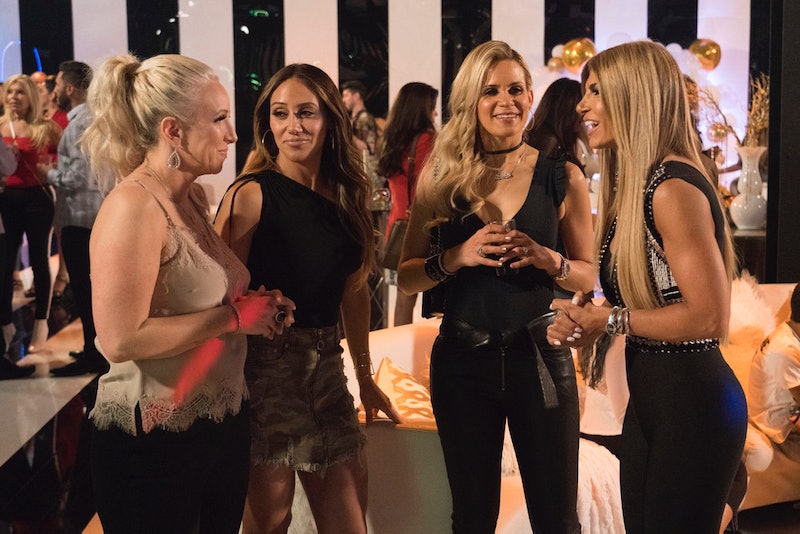 There is some tension brewing between Teresa Giudice and Margaret Josephs on Real Housewives of New Jersey, and it all comes back to Danielle Staub. Margaret and Danielle have been at odds all season and throughout their drama, Teresa has been the MVP of Team Danielle. Which might have some fans wondering if Teresa Giudice and Margaret Josephs friends after all that went down this season. After all, Season 9 filming wrapped ages ago, so who knows whether they've resolved their differences since then? Or did watching this season's episodes reignite some animosity?

The RHONJ Mexico trip centered around Margaret vs. Danielle and Margaret vs. Jennifer Aydin, but the real casualty from those disagreements might be Margaret's relationship with Teresa. During the Feb. 6 episode, Margaret told Jackie Goldschneider, "If you want the truth, I don't care about Danielle. It's about Teresa. Teresa ignited that tonight."

Why was Margaret so upset? She explained to Jackie, "She lets Danielle speak ill of my children. She lets Danielle speak ill of me. She owes me an apology." Meanwhile, in her on-camera confessional, Teresa referred to Margaret as "the toxic one." After the Mexico trip, the two Housewives met up for lunch back in the Garden State where Teresa told Margaret, ""I'm the type where I trust you until you f*ck me over. Here's the thing, Danielle hasn't done anything to me. But, you haven't done anything to me either."

They didn't actually resolve anything, but at least they didn't argue. If there's no wine thrown or glasses smashed, that's as close to peaceful as it's going to get for the New Jersey Housewives these days. Ultimately, Teresa did attend Margaret's charity event at the end of the episode.

During her on-camera confessional, Teresa remarked, "Anyone who has the heart to put on an event like this is a good person. This is the Margaret that I fell in love with when we first met and it's nice to see that again." But what does she think now?!

During a January episode of The Real Housewives of New Jersey After Show, Teresa and Margaret discussed the tension between them in separate interview segments. Teresa remarked, "I feel like [Margaret] turned me against [Margaret] because I feel like when you’re friends with someone, you don’t backstab them. I felt like that’s what she was doing to Danielle.”

In contrast, Margaret insisted that the demise of her relationship with Danielle was a long time coming. She claimed, "It was not overnight. It was gradual. It might look overnight to Teresa." Then she claimed, "That’s Danielle getting in [Teresa's] head. Danielle’s saying to her ‘I don’t know why she dumped me.’ Danielle knows why I don’t want to be associated with her.” Margaret added that she "loved" Teresa, but thought she was a "very poor judge of character."

But it seems that they may have resolved their differences since filming. On Jan. 16, for example, Margaret attended Teresa's daughter Milania Giudice's music video release party. Margaret even posted a sweet message about Teresa's daughter to commemorate the occasion: "What a special night supporting a beautiful and talented young woman!!" Not only that, but she stood in that group photo with both Danielle and Jennifer. If that doesn't show how much Margaret loves the Giudice family, then what does?

A week later, Teresa and Margaret took photos together at Andy Cohen's baby shower in California. With the 9,835,922,252 Housewives in attendance, they had plenty of choices about who they wanted to take photos with. So the fact that these two posed together means that all hope is not lost for their relationship.

This all might have been resolved during or after the reunion, which is airing soon. (Not soon enough!) During the Jan. 30 Watch What Happens Live, Margaret discussed the Season 9 reunion taping with Andy. He declared, "Teresa came in hot at that reunion." Margaret didn't even blink before agreeing with him and then adding that she was "scary." Whether that Giudice temper was aimed at her, we'll all just have to wait and see. But Margaret did explain some of the dynamics at play in this feud. She explained:

So, it might be a little bit unclear where Teresa and Margaret stand these days. Teresa is still very close with Danielle and Margaret and Danielle are still very much at odds. It would make sense if they're not as close as they used to be, but it sure looks like they can be in the same room together without turning a wine glass into a shank. Which is really saying something these days.