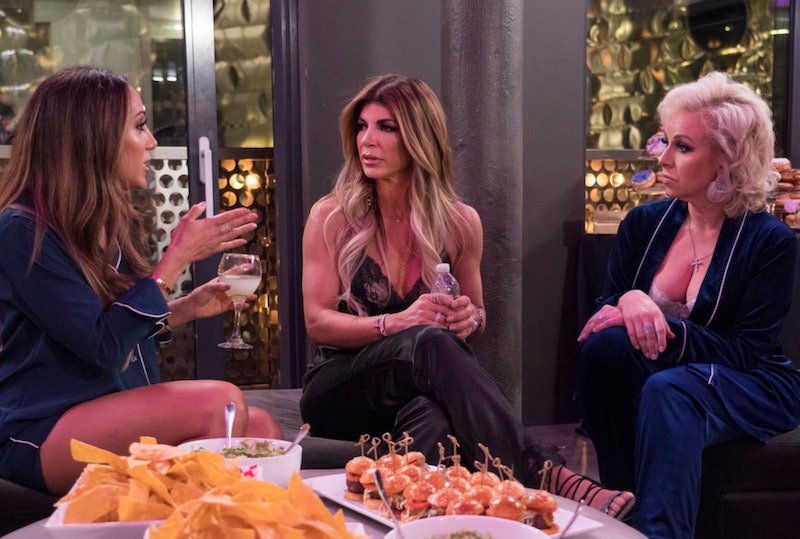 Hold on to your table, because it sounds like The Real Housewives of New Jersey Season 9 is about to flip out. When E! spoke to Margaret Josephs at The Daily Mail's holiday party, the handbag designer said there's some major RHONJ Season 9 drama on the horizon. Though she didn't spoil what exactly takes place in the upcoming episodes, the RHONJ star did say there is a fight that that reminds her of a certain classic movie and a certain classic piece of artwork. She also predicted that the conflict will "go down in Housewives" history.

You think Melissa Gorga and Teresa Giudice’s ongoing conflict has been gnarly? Were you left short of breath when Jackie Goldschneider stepped to Teresa at the lunch Jennifer Aydin threw so the other Housewives could meet her house and see all 16 of her bathrooms? Were you on the edge of your seat when Margaret stormed out of Danielle Staub’s bachelorette party planning committee meeting before resolving things with the bride-to-be? Apparently, all of that pales in comparison to the Season 9 drama that lurks just around the corner.

“You see a fight of a century,” Margaret teased. “I think it’s going to go down in Housewives history, across franchises.” She did not name names, but she did say it involves “everybody at the table.” Margaret continued,

“All of us. It gets unraveled. It’s so epic. It’s really like an amazing movie, I’m telling you. It’s like a scene from The Godfather.”

The E! News reporter dubbed the moment “The Last Supper,” and Margaret agreed. “You’re right, it could be called ‘The Last Supper,’” she replied. “It’s really an amazing fight. It’s going to go down across franchises, history.”

This to-be-aired scene has been compared to not one, but two masterpieces, and that comparison should not to be taken lightly; when Margaret tells us something major is going to happen, it tends to happen. Remember when she promised us an epic Studio 54-themed birthday bash unlike anything we’d ever seen before? And we were like, “A ‘70s-themed party on a Bravo reality series? Groundbreaking”? But then we promptly wolfed down our words with a side of humble pie when saw her disco ball garden and outstanding horse statue grand entrance? Margaret does not disappoint. So, it's probably in everybody's best interest to brace themselves for this RHONJ moment. Leave the doubt, take the sprinkle cookies.

Of course, this fight isn't the only thing that's going to happen in the upcoming episodes. After Wednesday’s episode of RHONJ, Bravo treated us to a preview of the remainder of the season. In the clip, we see Teresa continuing to prep for her fitness competition, Jennifer dangling a marionette as someone compares it to “the clown from Poltergeist,” and Fetty Wap arriving at Miliania Giudice’s album release party.

We also see Margaret pushing Danielle’s then-fiancé (and now soon-to-be-ex-husband) Marty Caffrey in a pool. We see Margaret and Danielle calling each other names. We hear Dolores Catania tell someone they're going to get their you-know-what kicked. We see Melissa storming out of a restaurant (and maybe out of a vacation, too?).

Wow. When Andy Cohen said this season is "the best it's been in years," he was not kidding.