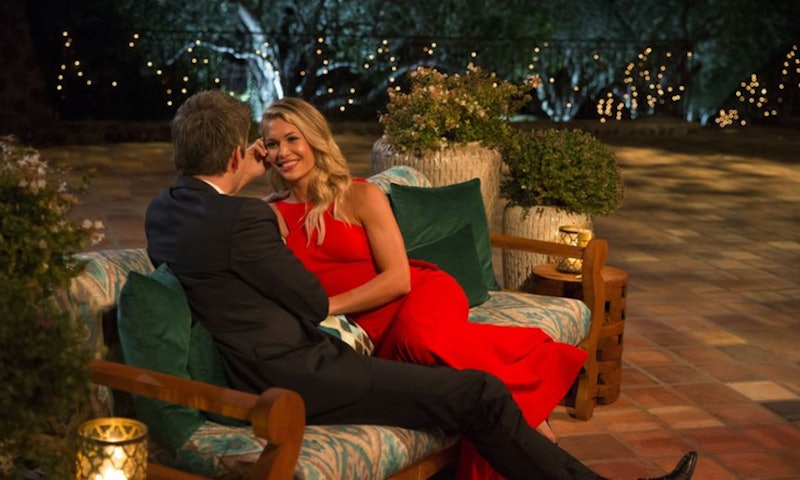 The villain role is always just hanging out there at the beginning of a Bachelor season, just waiting to be scooped up by the first woman to pull the Bachelor away from the group one too many times. For Arie Luyendyk Jr.'s season of The Bachelor, that assertive competitor happens to be Krystal and she has not made a lot of new buddies in the mansion as a result. Since filming has now wrapped and the dust has had a chance to settle, are any of The Bachelor stars friends with Krystal after the show?

Well, it is kind of tough to say but first let's look back on why it would be a little more than shocking if Krystal was snuggling up with the rest of Arie's ladies after the last rose was handed out. Right from the jump, Krystal was just a bulldozer. Not woman stood a chance of having any kind of moment alone with Arie without Krystal snagging him for a "quick second" alone with her. It was clear that she was going to be a tough one to work around right from the beginning and honestly, I give the rest of the women credit for keeping their cool about it. Krystal is not an easy competitor by any stretch of the imagination.

Between outbursts and steamrolling moments, Krystal has also said some pretty catty things about her fellow competitors. She referred to the other contestants as "desperate" at one point and even attempted to give them all advice because she felt like she knew Arie so well at this point in the game that she could help them all out. In reality, it was just another way for her to speak condescendingly to these women and to pretend that she and Arie were the closest in the mansion.

Most recently, it was Arie himself who had some drama with Krystal. It all seemed like fun and games during a bowling date when Krystal's team won, until Arie decided to declare everyone a winner and Krystal threw a legendary fit as a result. She stayed home from the date and caused a huge scene that seemed to confuse Arie as much as it confused everyone else. At one point he even said, "It's just bowling." She even referred to Arie as a "liar" and this was simply because he decided to forgo the bowling competition and allow everyone to have an after-party together. It was very odd and eye roll-inducing. Fortunately for her, it looks like Arie isn't holding a grudge against Krystal after the show. He told Us Weekly about the incident,

We do have some conflict next week, but, you know, I know it’s so cliche to say, but [Krystal] wasn’t there to make friends. She put our relationship first and that caused some conflict and I think that there is something to be said about somebody that fights for the time that you get together, because you do have such a limited time ... I mean, I don’t think it’s that bad. I know you guys think it’s terrible, but I often found it to be sweet.

Krystal's Instagram is not exactly a treasure trove of information when it comes to her personal life. It really only shows her fitness journey and her coaching career. It honestly seems like she is focusing on her career aside from one photo from the Bachelor set that doesn't really show that she has maintained any relationships outside of the season. A quick look into some of the other ladies' Instagrams doesn't show any candid photos of Krystal either, which makes me think that they probably aren't hanging out on the regular.

It doesn't seem like Krystal came out of the mansions with a boatload of friends. It might not exactly paid off for her to wedge herself so firmly into the villain role this season. But, hey, maybe after some time goes by and people cool off — some people will come around to her. In the meantime, though, it's very clear she didn't go on the show to make friends.