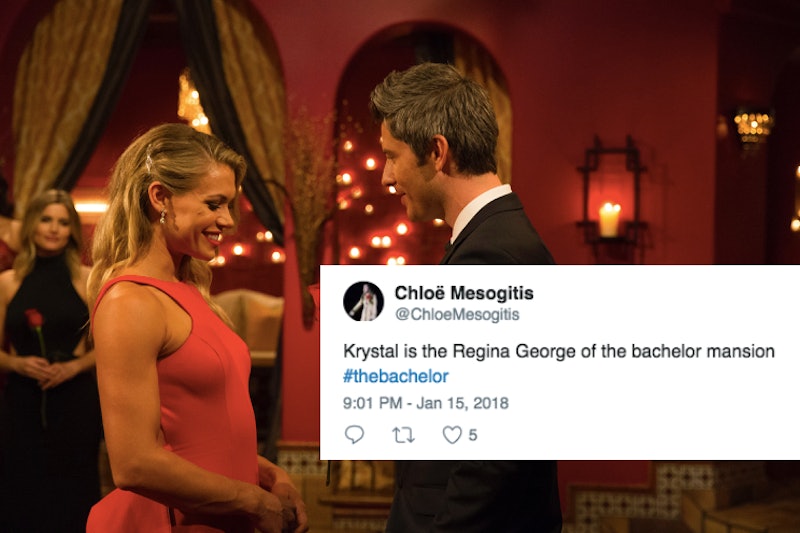 Though it's petty to declare that a season of The Bachelor (senior producer: Lindsay Liles) requires a villain, it's quickly become clear that one contestant has rubbed her fellow ladies the wrong way far more than anyone else these past few episodes. According to fans, Krystal is the villain of The Bachelor this season after isolating herself from the rest of the contestants by stealing Arie away more than some think is fair. Last week, she scored a one-on-one date with Arie — one which even lead to her checking out his hometown and meeting his family. Despite this, she felt the need to "borrow" Arie, as the ladies so sweetly put it when they come barreling into another woman's facetime, multiple times throughout the night.

This rubbed Bibiana in particular the wrong way, causing a bit of a confrontation between the two. Something that's definitely infuriating about Krystal, even for some viewers as well as contestants, is that she appears to put on a bit of a front when she address the rest of the group. Something about the way she stretches out her "byeeeeees" is a bit is definitely something fans have zeroed in on — she can have the tendency to sound a bit condescending.

This is pretty valid criticism — she definitely is there to win over Arie, which is obviously the point of this whole thing, but Krystal seems to have blatant disregard for all the time and feelings of the other women in the house. That may get her the final rose in the long run, but it certainly won't make her any friends or absolve her of criticism from the dating show's always-opinionated fanbase.

Particularly when Lauren S. was sent home this week after her one-on-one date, Krystal's faults were at the front of everyone's mind. Despite the fact that some of the women were legitimately upset to see Lauren go home, Krystal found this to be the perfect moment to lecture the ladies and give them "advice" on what they should do, because, as she so faux-sweetly put it, she's spent so much time with Arie, so she obviously knows what she's talking about.

This superior way of speaking that Krystal seems to cling to was only further explored as the episode went on. She was caught on camera speaking to one of the other contestants about how she has to deal with the saddest struggle known to man — she's just too appealing. Her childhood best friend's boyfriend broke up with her in order to pursue Krystal, but Krystal just couldn't do that to her friend. It was a very Regina George story, and fans have been responding to Krystal with GIFs of the infamous Mean Girls villain, so flawlessly immortalized by Rachel McAdams.

Earlier in the season, it seemed as though Chelsea may have been branded as the season's villain, aggressively pursuing Arie right off the bat in a way that many of the other contestants had not. But, since then, Krystal has eclipsed Chelsea in terms of who is willing to push other contestants to the side to lock Arie down.

Krystal is far from a horrible human being — she's been pretty open with Arie about the very real struggles she's endured with her family, her unhappy home life as a child, and the worry she still carries about her younger brother, who she says still lives out on the streets. She's simply playing the game how she thinks it's best played, and that's to be expected. But her attitude and level of respect toward the other women so far this season has definitely placed her staunchly in the role as the season's antagonist. Only time will tell if this continues throughout the remainder of the season. As competition is bound to become even more fierce as the process goes on, viewers will likely see even more of Krystal's ruthless tactics.