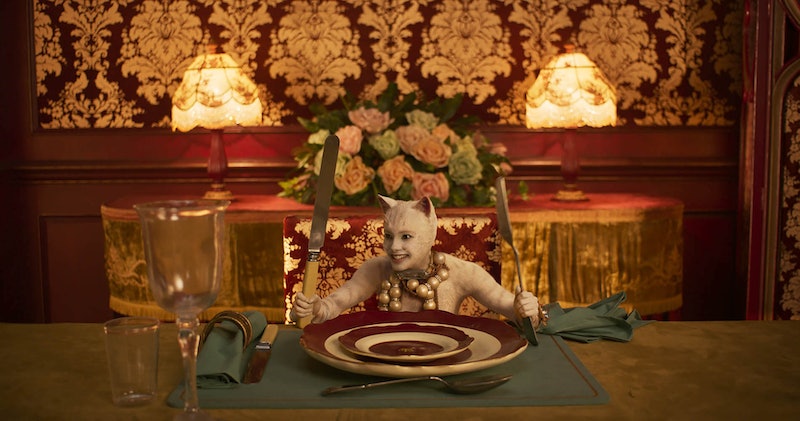 "Did I just watch a 2-hour movie about suicidal cats?" These were my first thoughts upon exiting Cats, Tom Hooper's digital fur technology extravaganza based on the musical by Andrew Lloyd Webber. But, as I reflected on the journey of the Jellicle cats, I realized that the cats weren't necessarily suicidal, but brainwashed. The cats in Cats are essentially in a cat cult. And once you notice, it's impossible to forget.

Cats follows a community of abandoned or stray cats living in London called the Jellicle cats. Once a year, they celebrate the Jellicle Ball, where cats who wish to ascend to the Heaviside Layer — a sort of cat heaven where they can be reborn into the life they desire — perform a song for Old Deuteronomy (Judi Dench), the Jellicle cat leader, who will then choose one cat to go to Heaviside. In other words, these cats are competing to die at the hands of their revered ancient leader. And this is somehow presented as hopeful.

Watching Cats, it's impossible not to wonder: what if a "Jellicle" isn't just a weird term for this strange group of cats, but the name of an actual cult? It all fits: the blind faith, the mysterious, unquestioned leader, the strange new vocabulary (reaching Heaviside Layer might as well be synonymous with "going clear"), and the strange ritualistic singing.

But what is perhaps the most disturbing about all of this is that many of these cats don't really have good reasons to die. Apparently the heavy brainwashing doesn't also give them the ability to make any good ones up, and there is nothing worse than half-assed ambition. You have to want it!

Take Skimbleshanks, the tap dancing railway cat, who performs a song about his satisfying life on the train and uses it as a reason he should be chosen to have a new life. He's young, nimble, and for all intents and purposes, pretty jolly. Why does he crave the sweet release of death? It feels a little greedy to want another life when yours is already pretty decent. Then there's Bustopher Jones (James Corden) whose personality is basically that he loves to eat garbage. Sorry, dude, but loving trash isn't exactly a compelling argument for someone to give you another life. But that's nothing compared to the gall of Jennyanydots (Rebel Wilson) who is just lazy, and therefore deserves another chance at life, I guess? For most of the Jellicle cats, their lives really aren't so bad. So why — why — do they want to be reborn so badly? And why do they need to participate in a talent show to achieve their goal? It's all for Deutoronomy's enjoyment, for her entertainment, and it's creepy as hell.

Somewhere in between Bustopher Jones' garbage diving and Skimbleshanks' impressive taps, I realized that none of these cats even know what Heaviside Layer is. There is no mention of what has happened to any previously chosen cats. No word from the great beyond, no confirmation of Old Deuteronomy's claim that chosen cats were reborn. For all they know, the ancient cat could be killing the innocents and eating them. Or maybe she feeds off their life force. Maybe she lives for the kill, and these poor cats are none the wiser!

I regret to inform you that Cats is a movie about an annual ritualistic sacrifice, but, alas, I must. Forget Midsommar. It is Cats that is the true horror film of 2019.