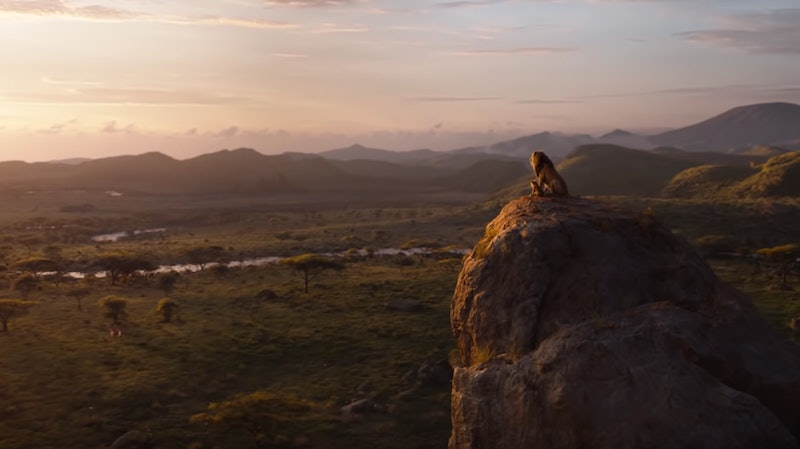 When you were a young warthog, Disney's The Lion King might have been your favorite movie. That childhood fave is coming back to theaters on July 19 as a "live-action" — but really CGI — film. You may have assumed when you first watched the 1994 original that Simba's home of Pride Rock is a real place, but growing up means facing the devastating truth that it's actually not. But while you can't exactly visit them, The Lion King's Pride Lands are based on a real African country that inspired the original animators.

According to articles published by Mental Floss and Buzzfeed, a now deleted entry on the Disney blog D23 revealed that the animation team behind 1994's Lion King was inspired by Kenya in digitally designing Pride Rock. Co-director Roger Allers reportedly said that the setting was "modeled after many different areas" of that country. He continued, "There are certain things lifted from the landscape around the Samburu District, but we used a variety of inspirations." However, he denied that the iconic jut of Pride Rock, where Simba is first presented, is based on any particular real rock formation. "Many people try to say, 'Pride Rock is based on this mountain here,' but they are wrong," he said. "An artist in Burbank invented Pride Rock."

According to an interview with Allers and his co-director Rob Minkoff, for Just Love Movies, a few members of the original Lion King production visited Kenya to do research for the film. "We would drive out to the savannah in open-topped vehicles to observe the animals — but there wasn’t much sketching because the animals were far too quick," Allers said. "Instead, we took loads of photographs." You can take a similar savannah tour in the Samburu District, which is located north of Nairobi in Central Kenya, if you want to follow in their footsteps.

The Samburu District, also called the Samburu County, covers 21,022.27 square kilometers of Central Kenya. "Samburu" means "butterflies" in the Maasai language. While you never see any humans in The Lion King, the district is home to several tribes, including the Samburu. Of course, there are animals that live there too, especially in the Namunyak Wildlife Conservancy. National Geographic describes the conservancy as a home to "several thousand elephants" as well as leopards, giraffes, wild dogs, kudus — a type of antelope — and yes, warthogs.

As you can probably guess, the new Lion King wasn't filmed in Kenya — but it certainly looks convincing. Most of the movie's visuals were created in California using CGI animation. You may have seen some online debates circulating the web regarding whether or not people should actually consider the 2019 Lion King a live-action film or not. As The Hollywood Reporter explained, films like The Lion King and 2016's The Jungle Book are often called "virtual productions," as they involve both live-action recordings as well as heavy CGI (computer generated imagery).

In an interview with The Atlanta Journal-Constitution, VFX supervisor Rob Legato explained how an interactive VR set was created for The Lion King. "We're really doing it identically what we did to Jungle Book except much more immersive, much more collaborative, where the crew could now walk into the same environment, experience the same things, and then rub off each other what they like and then it invites a discussion that otherwise you would not have," he said.

Because you're watching photorealistic animation throughout the new Lion King, it will definitely seem like the Pride Lands are as real as Kenya. You might never get to stand on the Pride Rock, but at least you know that the African vistas that inspired Simba's home are out there.