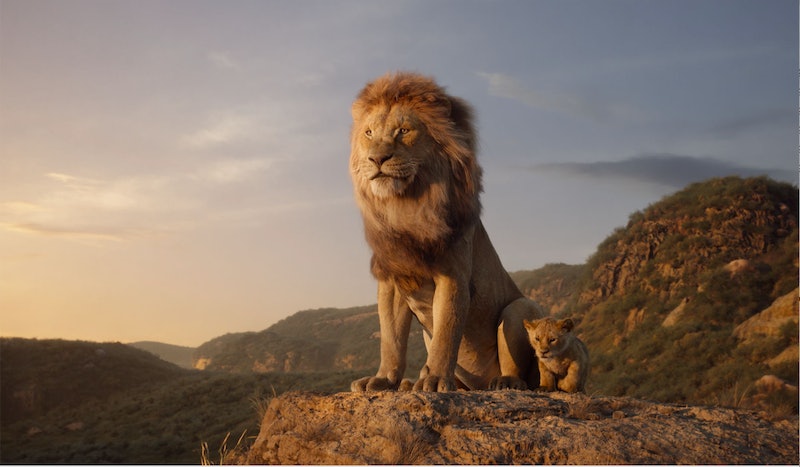 It turns out that the "Circle of Life" isn't just a song — it also applies to new Disney's new live action films, which reinvent the animated classics we know and love. Thankfully, the first full trailer for the live action Lion King promises to keep plenty of the moments that fans love from the original alive, while adding a new twist for a new generation.

In the clip, which was released on Wednesday, April 10, fans get their first look at the more realistic, motion-capture animation style, which somehow makes the villainous Scar (Chiwetel Ejiofor) even more menacing than his cartoon counterpart. "Life's not fair — is it, my little friend?" he drawls at the very start of the trailer, which opens on a terrifying shot of him standing near his hyena friends on the cliff.

Thankfully, though, the new Lion King trailer isn't just a way to traumatize fans who have never recovered from Mufasa's tragic death scene — it also pays homage to some of the animated film's most iconic moments, a shot that comes about a minute into the trailer, when Simba, Timon (Billy Eichner) and Pumbaa (Seth Rogen) strut their way through the jungle, just like they did in the movie's most famous number, "Hakuna Matata." Consider it official confirmation that the live action Lion King will, indeed, include plenty of the songs that fans have loved since their childhoods.

If that moment didn't make you emotional, the trailer is also packed with nods to Simba (Donald Glover) literally following in his father's footsteps to become the future king of Pride Rock. "While others search for what they can take, a true king searches for what he can give," James Earl Jones' Mufasa tells his son, echoing his famous speech about "everything the light touches" from the original film.

And while the new trailer still doesn't feature any of Glover or Beyoncé's highly-anticipated vocal performances, there is one classic musical moment, courtesy of Rogen and Eichner, who sing a snippet of "The Lion Sleeps Tonight" at the very end of the trailer. "I don’t have many scenes with [Beyoncé] in the movie," Eichner told Us in a recent interview. "We only exchange a few lines, but me, Seth Rogen and Donald Glover, we all recorded together. We recorded 'Hakuna Matata' together. Seth and I did 'Can You Feel the Love Tonight' together before Beyoncé and Donald [came] in."

In an earlier interview, Eichner touched on some of the major differences between the live action Lion King and the original, admitting on the Keep It podcast that he and Rogen have a different take on Timon and Pumbaa than Nathan Lane and Ernie Sabella. "The style of animation that this movie is — it’s so much more, for lack of a better word, realistic," the comedian explained to hosts Louis Virtel and Ira Madison III.

"My energy with Seth Rogen is very different than what Nathan Lane and Ernie Sabella’s energy was," Eichner explained. "They were both coming out of [a] production of Guys and Dolls when they did the Lion King. ... They had this very vaudevillian, Broadway, musical theater, borscht belt style, which here and there, Seth and I borrow from but we don’t lean into that as much."

He also noted that he felt a lot of pressure to live up to Lane's performance, as Timon is one of the most iconic animated characters Disney has ever created. "[Playing Timon is] shocking, it’s bizarre, it’s terrifying," Eichner admitted. "You can’t really do it better than [Nathan Lane] did it, you can just do it your way."

"[The updates] helped inform what we do and helped me create something that was distinct, I hope, from what Nathan did while also nodding to a little bit of what he did, which people loved," he continued.

While the new version of Lion King will have plenty of new takes on the classic story, it seems as if there will be more than enough nods to the film we all know and love to satisfy fans everywhere. Just make sure to bring plenty of tissues.