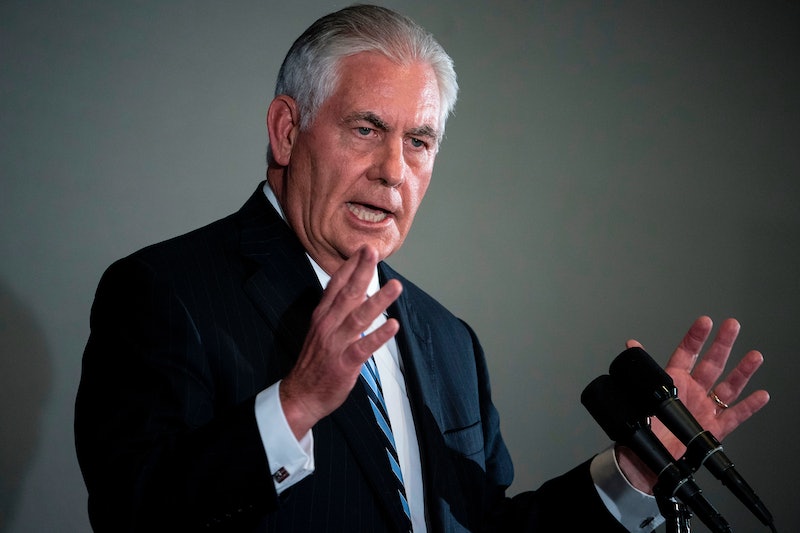 Following weeks of heated rhetoric between U.S. President Trump and North Korean Leader Kim Jong Un, which seems to escalate tensions between the two countries each day, U.S. Secretary of State Rex Tillerson told reporters on Saturday that the United States and North Korea are in direct contact, a statement that seems to indicate the Trump administration's willingness to engage in peaceful negotiations with the North Korean regime.

“We are probing, so stay tuned,” Tillerson said during a trip to China this weekend. “We ask: Would you like to talk? We have lines of communications to Pyongyang. We’re not in a dark situation.”

Tillerson's comments seem to almost contradict more aggressive statements made by President Trump in recent days, including his heated speech at the United Nations general assembly earlier this month where he lambasted Kim as a "Rocket Man ... on a suicide mission" and threatened to "totally destroy" North Korea.

These statements come just as the U.S. has slapped new, extreme sanctions on the isolated nation after Kim has conducted repeated long-range missile tests, despite international condemnation, and has threatened to reduce "the whole of the U.S. mainland to ruins." Kim has also criticised Trump directly in recent weeks, vowing to "tame the mentally deranged US dotard with fire."

Tillerson arrived in China this weekend to hold top-level talks with Chinese President Xi Jinping, who the U.S. sees as crucial in helping to pressure North Korea to end its nuclear militarization program. China, which neighbors North Korea and has been one of its major trading partners for decades, appears "increasingly willing" to cut ties with the regime by adopting harsh sanctions, according to Reuters. President Trump is scheduled to continue talks with President Jinping during a visit to China in November.

Given the escalating threats between President Trump and Kim Jong-il — threats that have made many Americans increasingly anxious about the possibility of nuclear war — it's no surprise that Tillerson used his visit to China as an opportunity to tone down the rhetoric and assure Americans that he is still open to international diplomacy as a means of calming tensions with Pyongyang. Still, he acknowledged that the situation is becoming a little out of hand.

"I think the most immediate action that we need is to calm things down," Tillerson told reporters. "They're a little overheated right now. And I think we need to calm them down first."

Calming things down after the North Korean regime accused the United States of declaring war, however, will be far from easy. North Korea has continuously refused to put an end to its nuclear missile testing. In fact, the regime only continues to strengthen its nuclear missile capabilities, and fired a ballistic missile over Japan just after the U.S. imposed new sanctions earlier this month.

Despite Pyongyang's repeated refusal to buckle to international pressure, Tillerson stated that putting an end to its missile program will be essential if peaceful negotiations are to be reached. "Obviously it would help if North Korea would stop firing off missiles," Tillerson said. "That would calm things down a lot."

The ongoing war of words between U.S. and North Korean leaders has understandably put a lot of Americans on edge. Given that North Korea has been backing up its threatening rhetoric with concrete actions and missile tests that Kim has stated can potentially reach the U.S. mainland, it's understandable that so many people are feeling worried about the looming threat of nuclear war. Tillerson's confirmation that the United States is in direct communication with Pyongyang is at least a step towards the possibility of de-escalating tensions between the two countries, a statement that will hopefully assuage fears and lead to peaceful diplomatic discussions down the line.