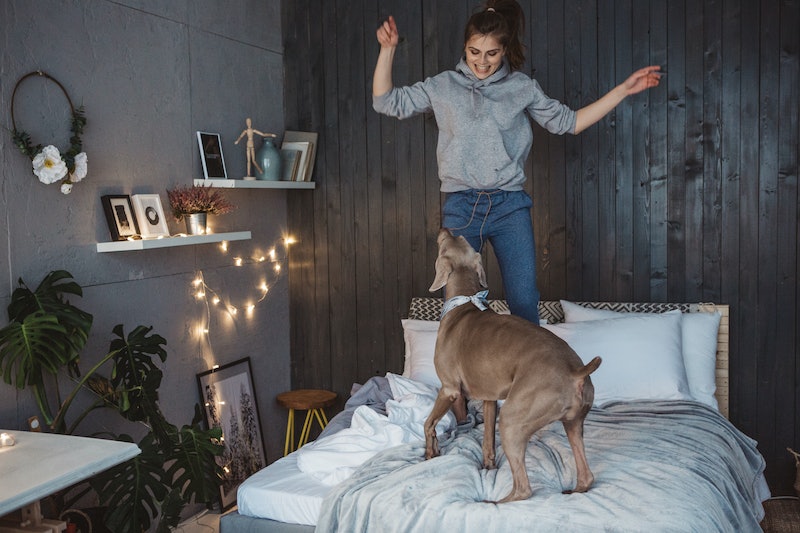 Are you feeling savage, classy, and bougie at home right now? Same. In an effort to be both active and entertained while social distancing, millions of people are cutting the rug in their living room, thanks to TikTok dance challenges — there are at least 5 billion views on videos with #dancechallenge alone. You might find that after trying to master the Savage x Carole Baskin Remix dance, you're sweating, out of breath, mentally and physically exhausted, and you're probably convinced that TikTok dances are a good workout, or at least a humbling one. You'll be pleased to know that all of that jumping around and arm wiggling is actually doing good things for your heart and mind.

Elizabeth, 33, has recently gotten into the challenges, especially the Doja Cat "Like That" dance. She says the short bursts of movement get her heart rate up. "It doesn't look like it would be a full body workout, but my whole body is definitely feeling it after learning a dance. TikTok dances used to make me feel old but now I'm hooked because it makes me feel happy."

According to Chad Weiss, a personal trainer and owner of Westchester MMA, a martial arts gym, TikTok dancing takes a “tremendous amount of energy.” While people stuck at home aren’t getting the traditional motivation of a group class, “the TikTok challenges have people moving around in a way that can burn 400-600 calories in an hour.” Besides the calories burned (which, by the way, are only a metric of energy in or out), Weiss "can't stress enough" how much any kind of movement, including TikTok dances, is good for mental health.

Brittany, 29, says for her, TikTok dancing is a mental health exercise. "I find the dances impossible, but it's also a thrilling express train to Nostalgiaville." She says the dances remind her of "being 10 and making up dances with [her] cousins to perform for the family at Thanksgiving dinner."

Lindsay, 29 is a new TikToker dead-set on mastering the OG "Renegade" dance before social distancing measures are lifted. She tells Bustle that she's having a blast learning TikTok dances at home right now for entertainment purposes, but has no plans of ever posting a video. "Trying to actually keep up with the dancers on TikTok is sometimes harder than the actual dance, once you know it. I have to replay the video so many times to pick up the moves, I am fully sweating and red in the face by the time I get it." She says part of the reason why she doesn't end up posting the videos is because she looks like "a sweaty mess" by the time she's done.

For Tayla, 30, trying to learn TikTok dances turned into blasting catchy songs featured on the app and dancing aimlessly in her bedroom. "I'm not very coordinated so trying to learn these fast dances was just not happening. But I found that I loved the songs people are dancing to on the app, so I just downloaded them and now I just freestyle on my own." The makeshift dance party leaves Tayla so sweaty, she plans her shower schedule around them. "It's one of the only things that makes me smile lately, just breaking out into some messy moves alone in my apartment, it's so freeing and feels so good to get my heart pounding."

But what do ~real~ dancers think of TikTok dances? Classically trained ballet dancer Aydah Albaba says you can find her "walking into the kitchen waving [her] arms up and down like a sexy belly dancer channeling the #JLOtiktokchallenge every morning," to hype herself up for another day at home. According to Albaba, it's the possibility of recording and posting the dance that makes it such a good workout. "You want your version of the routine to look perfect (executing correct choreography) but also want to appear effortless — that is a workout," she says.