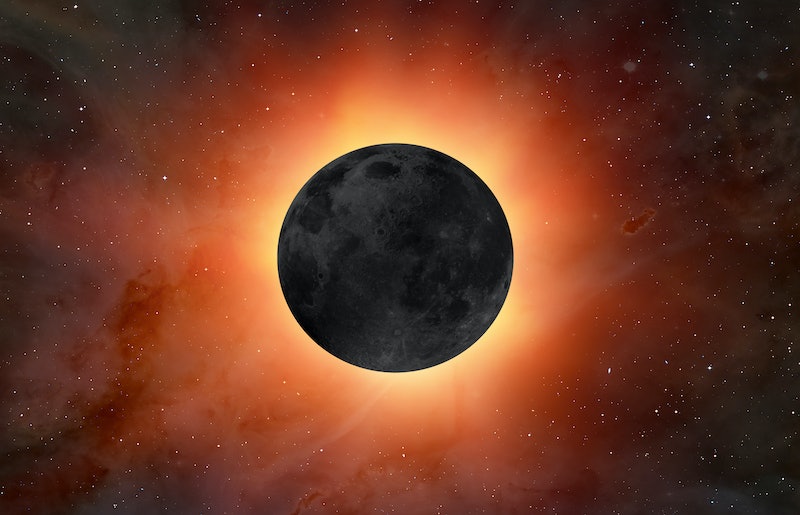 Cosmically speaking, 2018 has been off to a pretty stellar start. The skies have been treating us to a surplus of everything ~astrologically cool~, from a Super Wolf Moon on Jan. 1, to the super blue blood moon set to occur on Jan. 31 — the latter of which will also be the first total lunar eclipse of 2018. While all of these "events," as our friends in science tend to describe them, have been pretty (pun intended) out of this world, the eclipse on Jan. 31 begs the question: Are total lunar eclipses rare? Will we all be seeing history being made in the skies?

According to Space.com, "lunar eclipses occur when Earth's shadow blocks the sun's light, which otherwise reflects off the moon. There are three types — total, partial and penumbral — with the most dramatic being a total lunar eclipse, in which Earth's shadow completely covers the moon." It's important to note that all lunar eclipses can only happen during a full moon, when Earth’s dark shadow totally or partially covers the moon — but not all of them are full eclipses, because the planets and the moon don't always line up that way.

Like solar eclipses — aka, when the Sun is blocked from the Earth by the moon — can happen between 2-4 times per year according to Timeanddate.com, a lunar eclipse happens at about the same frequency. "Most years have four eclipses, which is the minimum number of eclipses that take place in a year, two of these four eclipses are always solar eclipses. While rare, the maximum number of eclipses that can take place in a calendar year is seven." So the solar to lunar ration is 50/50, if you want to make it easy on yourself.

You might remember the last solar eclipse visible to most of the U.S. on August 21, 2017. I was in New York City that day and have vivid memories of what had to be tens of thousands of people filling the streets gawking at the sun with those makeshift cereal box eclipse projectors or their paper eclipse glasses. A lunar eclipse, however, is way different to this — for starters, it only occurs at night, and instead of blocking out the moon, it just makes it appear red.

If you want the science-y explanation for what's gonna go down on Jan. 31, here the breakdown according to Space.com: "Earth casts two shadows that fall on the moon during a lunar eclipse: The umbra is a full, dark shadow. The penumbra is a partial outer shadow. The moon passes through these shadows in stages. The initial and final stages — when the moon is in the penumbral shadow — are not so noticeable, so the best part of an eclipse is during the middle of the event, when the moon is in the umbral shadow."

Here's the best part about seeing the lunar eclipse: none of those funky glasses or cereal box viewers are required. That's right, according to Timeanddate.com, "observing a total lunar eclipse does not require any special equipment. Lunar eclipses are safe to see with the naked and unaided eye." Talk about a silver (moon) lighting amiright! So get out there and enjoy every waking second of it.