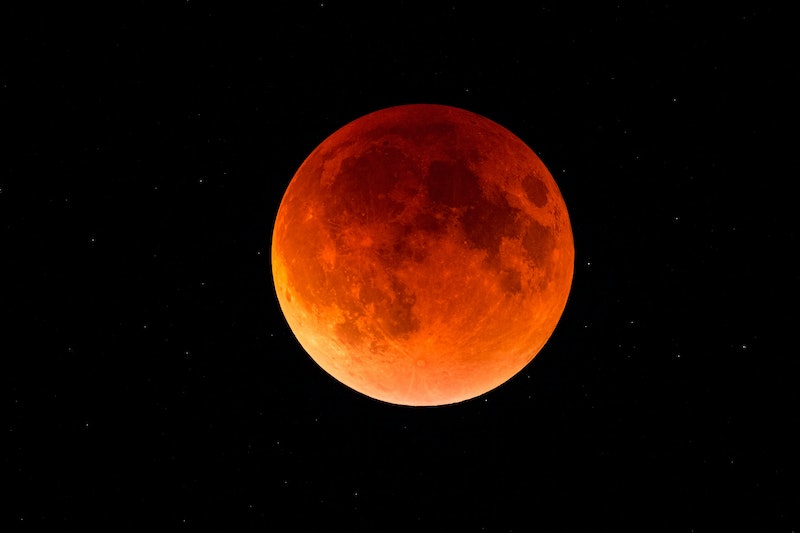 There are certain groups of people that are forced to wait patiently for (literally) hundreds of years in order to experience the milestones that are important to them — and those among us who are interested in natural phenomena are wildly overrepresented in this larger category. Major astronomical events, in particular, can take decades upon decades to repeat themselves. Remember when everyone went nuts for eclipse glasses in August 2016? Well, get ready — you may not need glasses for this one, but another major astronomical spectacle is on the horizon (pun intended!), and space buffs everywhere should be pretty excited about it too. The first total lunar eclipse of 2018 is happening on Jan. 31, and though that in and of itself isn't a totally big deal, the fact that it'll be a total lunar eclipse of a blue moon is. Specifically, a lunar eclipse like that hasn't happened for 150 years.

The phrase "blue moon" is commonly heard in music — and in declarations about things that are probably never going to happen — but you may be less familiar with its actual astronomical definition (I know I was). An event that happens approximately once every two and a half years, a blue moon is a situation in which two full moons rise within the same calendar month, according to aptly named Space.com. In January 2018, a full moon will be seen in the sky on both the first and last day of the month, so we've got ourselves a blue moon. Such a full moon can look blue in color, but it doesn't always — the Jan. 31 full moon will, in fact, have a reddish appearance (aka, it'll be a "Blood Moon"), due to the total lunar eclipse that'll be occurring during its rising. In other words, Earth's atmosphere will be removing or blocking part of the sunlight's spectrum, leaving only the longer wavelengths. These wavelengths are then refracted off of Earth's atmosphere and light the Moon's surface with a red tinge.

The first eclipse of 2018, per Space.com, happens to fall oh-so-conveniently on the same day as the second of January's two full moons: Jan. 31. It's a total lunar eclipse, which means that the sun, Earth, and moon will be aligned to form a nearly perfect straight line. During said eclipse, "Earth blocks any direct sunlight from reaching the moon," according to Time and Date. "The sun is behind Earth, so the sun's light casts Earth's shadow on the Moon. This shadow covers the entire Moon and causes a total lunar eclipse." Basically, a blood moon is a fancy term for a moon experiencing a total lunar eclipse — cool, huh?

What's especially unique — and therefore exciting — about the upcoming total lunar eclipse is that it happens to fall on a blue moon. The last time we saw this particular set of phenomena occur simultaneously was on Mar. 31, 1866, more than a century and a half ago, Space.com reported. Eclipses aren't too rare, but a total lunar eclipse of a blue moon? Now we're talkin'!

If you're dying to bear witness to this rare astronomical event (and why wouldn't you be?), your ability to do so is unfortunately somewhat dependent on your location. The eclipse will take place in the middle of the night on Jan. 31, when the Pacific Ocean will be turned toward the moon. Central and eastern Asia, Indonesia, New Zealand, and most of Australia should get a good glimpse, according to Space.com. Alaska, Hawaii, and northwestern Canada will get to see the eclipse from start to finish, while the rest of us in North and Central America will (sadly) find that moonset will interrupt the spectacle from our perspective, blocking parts of the eclipse. Given what a major event this is, I'm fairly confident that there will be plenty of pics of it shared to social media, but given how truly rare this apparently is, I for one would much prefer to check it out firsthand.