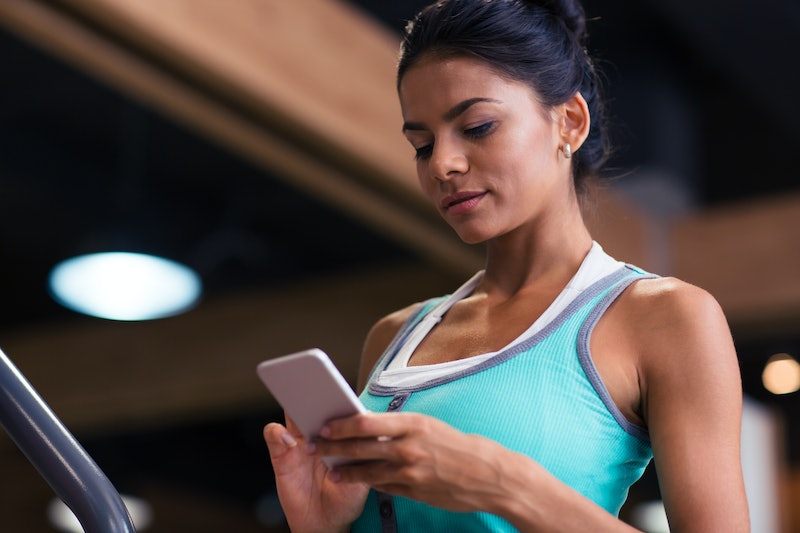 Last year, I downloaded a sleep tracking app. After spending what felt like more time studying my results than sleeping, I promptly deleted said app. The same happened when I tried diet tracking and productivity tracking. Now I've fallen into fitness tracking, analysing how often I go to the gym, how long I spend there, the muscles I'm training, and how to up my game each and every time. The reliance on tracking apps is a hard thing to break, but it's an experience a lot of people are likely to identify with.

We've become heavily concerned with being the best we can be, rather than just being. There are countless stories online of people who track Every. Single. Inch of their lives. Is it time we hit delete and returned to a blissful, data-free life? Or is this the analytical future of the human race?

Hannah Martin, founder of Talented Ladies Club and qualified psychotherapist, puts it best: "At what stage does this extreme, conscious focus on what we would ordinarily do completely naturally and unconsciously veer from healthy habit tracking to unhealthy control?"

Health tracking is nothing new

Our methods of measuring our habits may be modern, but the habit is in fact age-old, dating back to the ancient Greeks. Cultural anthropologist Natasha Dow Schull tells The Globe & Mail: "[The Greeks] believed in taking daily inventory of activities such as eating, exercise, and social interactions."

Is it time we hit delete and returned to a blissful, data-free life? Or is this the analytical future of the human race?

Fast forward thousands of years and you enter an age where not only fitness and diets are logged, but sleep, sex, periods, and even relaxing practices – like meditation – are meticulously recorded and dissected. In fact, we aren't just interested in their own lives, we need to know how our loved ones compare, too.

Is technology taking our obsession too far?

Some parents track their babies' every waking (and sleeping) moment, per Wired. The same title chronicled a writer's experience who was "pretty sure" his girlfriend was dead after a location tracking app showed she'd been stuck in an alleyway for over an hour. (Turned out her phone had just died.)

Trackers have turned into a dictator of our actions and emotions; technology that's so ingrained in our lives, we struggle to do basic things without it. This type of conduct is known as "quantifying behaviour", which therapist Roger S. Gil tells Lifehacker, "can be beneficial as long as it's part of a larger intervention. It's helpful when trying to identify a baseline for a particular behaviour you want to change because it gives you a starting point."

But, he adds: "the thing is that you have to maintain the tracking in order to be able to monitor progress. For some people, monitoring progress can elicit more anxiety since it makes the inevitable 'plateau' periods that we all have seem that much more noticeable."

Lifestyle and mindfulness coach Kiran Singh agrees that tracking apps can be good for you. They can "help make some people more mindful" of improving certain behaviours, she says. "Through these apps, people are not only seeking to fulfil this ideal of personal responsibility, but also seeking relief from it."

Science backs up the association between monitoring and healthy lifestyle changes, psychology lecturer Dr. Caroline Plateau noted in The Conversation. And there's no doubt that some apps tend to help more than hinder. For example, apps that track pitches, projects, and payments are particularly useful for freelancers, for example.

Dwelling on data can be harmful

Fitness and mindfulness-themed apps, however, can shift a person's mindset from "want to" to "have to", even going so far as to create an issue that didn't previously exist. Experts are beginning to dig deeper into the possibility that tracking apps are causing disordered eating, per The Conversation.

Orthosomnia — an obsession with sleeping well — has also been linked to the rise in sleep trackers, the Guardian reports. Indeed, sleep and ventilation consultant Alanna Hare told the paper she's seeing patients "who probably didn’t have a problem until they started to become overly focused on their sleep."

"You shouldn’t need a tracker to know if you’re tired," says Singh. "Some days, we might feel fine on five hours of sleep and some nights, we might need nine: that’s normal. I think some people (who use these apps) can lose touch with the human connection they have to their bodies."

It's time to stop measuring life and start living it

With countless apps available and an ever-growing market, is it time more consideration was given to the effects of life tracking? App designers may have the best intentions, but humans are cursed with taking things to the extreme. And Singh believes the technology has "become a fixture in modern life."

Personally, I'm hoping to rewrite that narrative. A new year calls for a new resolution: one that realises that, sometimes, not knowing is a healthier option. So enough bar charts, graphs, and statistics. As Martin says: "It's time to stop measuring life and start living it."

More like this
This Is When Netflix Is Going To Start Charging You For Sharing Passwords
By Darshita Goyal
Here’s Where The NHS Nurses’ Strike Currently Stands
By Sophie McEvoy
90 Epic Truth Or Drink Questions To Play 'Say It Or Shot It' With
By Bustle UK
Forestcore Is About To Take Over Your TikTok FYP
By Sam Ramsden
Get The Very Best Of Bustle/UK
Sign up for Bustle UK's twice-weekly newsletter, featuring the latest must-watch TV, moving personal stories, and expert advice on the hottest viral buys.