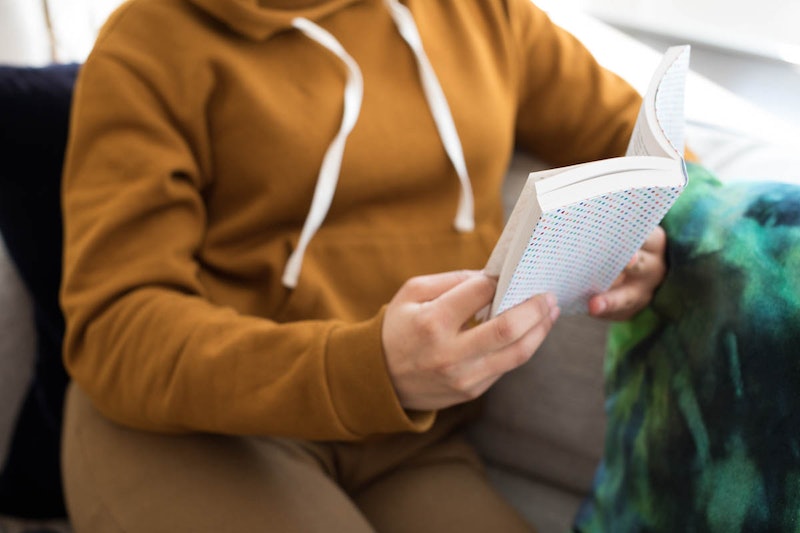 A trigger warning is a statement saying that some type of content — like a film, book, or classroom material — contains images or descriptions that could trigger symptoms in people with post traumatic stress disorder (PTSD) and other anxiety disorders. But trigger warnings are a topic of debate these days, and some experts question if they’re actually good for people. According to a new study, however, evidence shows that trigger warnings do help people feel better.

Published in the Journal of Experimental Social Psychology, researchers say that there’s been very little research to date showing the effectiveness of trigger warnings. “Surveys show that trigger warnings and other similar warnings are increasingly common, but there is virtually no research as to whether they actually make people feel better or whether they lead to avoidance," Izzy Gainsburg, study author and a doctoral student in psychology, said in a recent press release.

In order to better understand how the warnings impact people’s mental health and well-being, University of Michigan researchers examined how trigger warnings affect people’s reactions to different types of content. For the study, 80 people answered questions about how they expected to react to content preceded by trigger warnings. Participants were also asked to describe their beliefs about trigger warnings, and were asked to assess their individual coping styles and anxiety levels.

According to the study’s press release, participants reported that they expected to feel more anxious when exposed to content that came with a trigger warning, and those who believed that trigger warnings are beneficial and protective were more likely to avoid said content. Further study findings showed that videos with trigger warnings were avoided more often than those without.

In the third section of the three-part study, nearly 1,000 participants were asked to read an essay about domestic violence. Three versions of the essay were randomly assigned: one with a title only, one with a title plus a trigger warning, and a third version with the essay title plus a warning indicating domestic violence, specifically. Results showed that study participants who received some type of warning before reading the essay had less negative reactions than those who received no warnings did, according to the press release.

Trigger warnings are helpful, as a previous story for Bustle explained, because they allow people who may experience symptoms of PTSD in response to certain stimuli (aka, triggers) to opt out of that experience. Some people argue against the use of trigger warnings, in academia or otherwise, under the belief that avoiding triggers makes people "weak" or unable to cope with potentially traumatic events; the truth is, though, people do not need to be exposed to graphic descriptions of violence or other triggers in order to be able to discuss them in a thoughtful, nuanced way. "The suggestion that people are being overly sensitive in desiring trigger warnings comes from a very privileged place," writer Amy McCarthy suggested in 2014.

“This is just the beginning of research on how these warnings affect people’s emotional experiences, and by no means settles any sort of debate," Gainsburg said. "There is so much more that can and needs to be done, especially if institutions are encouraging or mandating [trigger warnings'] use.”

And while more research is needed to fully understand how trigger warnings impact people managing PTSD and anxiety disorders, the current findings support the notion that having the choice to avoid potentially triggering content can help people feel better.