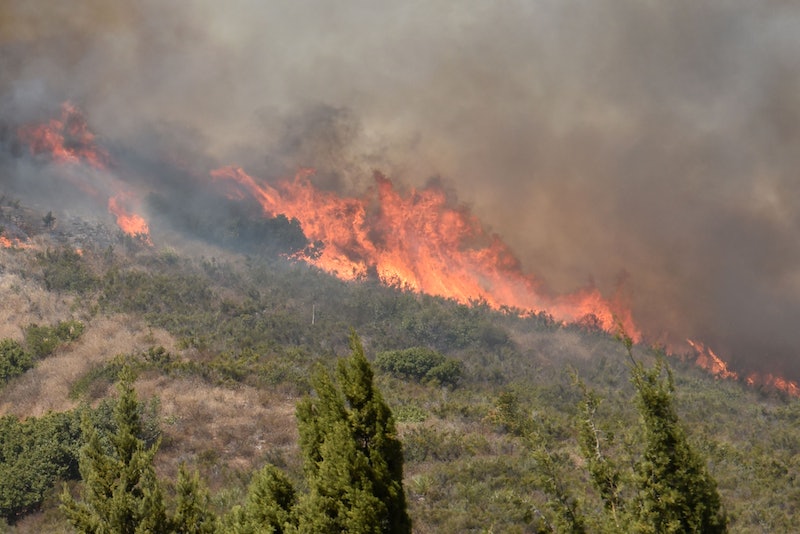 Since Sunday, parts of California have been engulfed by scorching wildfires, according to various media and weather reports. The most powerful and destructive fires were reported in Napa, Sonoma, and Mendocino counties. All three counties are famous for their picturesque landscapes and wine manufacturing sites, but the fires that have been swallowing the areas for the past three days have left much of the land and its people devastated. In the midst of these reports, some may wonder if wildfires are natural or not.

There's no definitive and singular answer for this question, but looking at the possible and varying causes for a wildfire might point to whether it was naturally-occurring or man-made.

Sometimes wildfires are caused by incredibly dry and arid conditions in temperature and terrain. If the wildfire was natural, there is a likelihood that it began as a combination of varying levels of wind, humidity, and heat. A lot of wildfires also begin with a strike of lightning — the lightning may spark a flame in the woods which is then given more momentum by winds. A strong wind can carry a flame to new flammable sources like other woods, branches, and leaves, and these transferred embers start "spot fires."

A small spot fire can become a massive one, depending on the strength of the wind. Here, sunlight plays a critical role, too. A bright and sunny day could lead to hotter ground and raise the earth's temperature. This heated ground can help air travel up Californian hills.

One of the reasons why the 3-day-long wildfire in California took on such strength is because wildfires often generate hurricane-strength winds, winds that can sometimes reach 100 to 120 mph. Such a powerful wildfire can sustain itself for long periods, covering days sometimes.

On the other side, sometimes wildfires are not caused by natural occurrences. In some cases, a wildfire may spread due to a human being's lack of consideration for his or her natural environment. In this case, a flicked cigarette ember, a dropped and lit matchstick, bonfires or campfires poorly or incompletely exhausted or deliberate arson can lead to hellish fires in these landscapes.

CNN reported that authorities have not yet indicated how these fires engulfed the three California counties. But the damage caused by the fires includes several casualties, including the deaths of at least 15 people and the evacuation of some 20,000 locals. In addition to the human cost of the Californian fires, around 2,000 residences and businesses have been affected, according to the California Department of Forestry and Fire Protection.

Hundreds have reported burns to their skin and toxic fumes incapacitating their ability to breath. At least 180 people are currently missing, though officials are optimistic and believe that the lack of communication is due to services being impacted by the fires. Hopefully, the missing will return to the grid as soon as the intensity of the fire lessens.

At this moment, authorities are looking into what might have caused the flames that blazed from Sunday until Tuesday. Ken Pimlott, director of the state's Forestry and Fire Protection services, spoke with CNN said, "All these fires are under investigation." He did, however, note that the possibility of these wildfires being ignited by lightning were "fairly minimal."