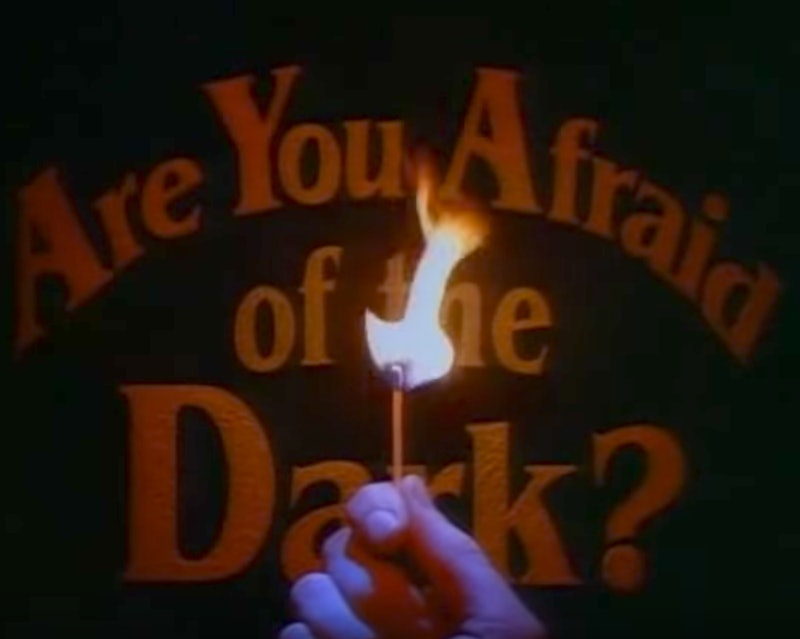 Usually, things that were scary when you were a kid become less scary when you grow up, but that's not the case now. According to Variety, an Are You Afraid of the Dark movie is coming to bring the scariest part of your childhood back, and it's probably going to be even freakier than you remember. That's because one of the writers from It, Gary Dauberman, has reportedly signed on to the film. If you're concerned that the most frightening show from your childhood will now become the eeriest film of your adulthood, that fear will likely come to fruition — because fear is exactly what Are You Afraid of the Dark thrives upon.

For instance, "The Tale Of The Ghastly Grinner" practically introduced the world to Pennywise's equally creepy joker cousin, and seeing him on the big screen might just force everyone to call their parents and ask to sleep in their beds for the night.

The movie of the show will be a product of the new Paramount division called Paramount Players, which, as Variety reported, "focuses on contemporary talent." Paramount Players will produce entertainment for younger audiences, though everyone knows that every '90s kid will be the first ones in line to see the reboot of their favorite childhood TV show when it comes out. Because Paramount Players is partnered with Viacom, the company will likely be able to use Viacom's brands' resources which includes, you guessed it, Nickelodeon. Considering that a Dora the Explorer movie is already in the works from the distributor, it seems like the possibilities are endless for Nickelodeon shows' movie adaptations.

The inimitable show ran from 1992-1996 (and then a one season stint in 1999) on Nickelodeon's SNICK programming, which, for the unfortunate people who don't remember, ran on Saturday nights from 8-10 p.m. This made Are You Afraid of the Dark prime sleepover entertainment, and, even though other memorable shows like All That aired on the Saturday night lineup, the star of the night was definitely the scary storytelling. Each episode was titled "The Tale Of," and it was kind of the grown-up version of Wishbone — or so it felt to the tweens lying on their piled up pillows on the living room floor watching it.

Honestly, if there were going to be only one SNICK show to introduce to future generations, Are You Afraid Of The Dark should be it. And it's exciting that all of the goopy monsters will get a CGI upgrade, too. Whether or not the show will focus on certain episodes is yet to be determined. A few episodes of the show have been hard to forget, and it would be fun to see those brought back to life — no pun intended. Namely, "The Tale of the Dollmaker" — which made everyone want to throw away all of their dolls immediately — and "The Tale of the Crimson Clown." And who could forget all of those many episodes featuring dead children?

So, yeah, it's no wonder the show had such a lasting impact of all of the kids who watched it. Now a new generation can look forward to losing many nights' sleep due to Are You Afraid of the Dark.