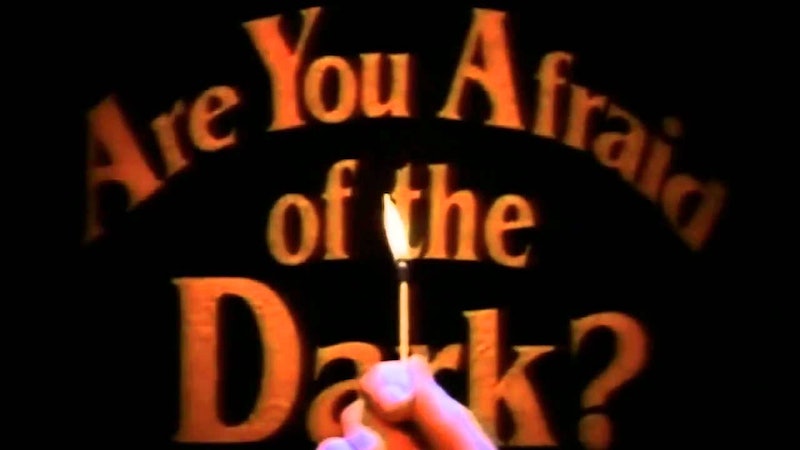 My most vivid Saturday night childhood memories all involve the Nickelodeon series Are You Afraid of the Dark?, and for good reason: The show scared and mesmerized me in equal measure. It instilled in me a love of horror television that led me to fall for The Twilight Zone, The X-Files, Lost, and way, way too many other shows to mention here. It was not only formative television, but also creepy beyond the point of reason. From the squeaking swing in the opening credits to the idea that a group of young teens snuck out to the middle of the forest to tell ghost stories to the actual tales themselves, Are You Afraid of the Dark? was pure nightmare fuel. Remarkably, the show still holds up today.

Just seeing "help me" scrawled backwards across the walls of an empty house was scary enough — but when the little ghost girl steps out of the mirror, all composure is doomed to be lost. "The Lonely Ghost" is ultimately as sad as it is scary, since the ghost in question is a dead, deaf little girl who has been trapped in the home alone for years.

2. "The Tale Of Laughing In The Dark"

"Pick the right door and you'll go free. Pick the wrong door and there he'll be." Zeebo, giving people nightmares since 1992.

For a show aimed at kids, Are You Afraid of the Dark? sure featured a lot of dead children. This quality episode featured the ghost of a child who froze to death and charmingly wandered around telling everyone "I'm cold." I get the shivers just thinking about him.

4. "The Tale Of The Dollmaker"

Not only does a young girl get turned into a doll — at one point her hand falls off. Nightmares really do come true.

5. "The Tale Of The Ghastly Grinner"

There's just no way "The Tale of the Ghastly Grinner" wasn't inspired by the classic Batman comic "The Killing Joke," but that doesn't diminish its creeptastic power.

6. "The Tale Of The Silent Servant"

Combining the terror of scarecrows and the be-careful-what-you-wish-for adage, "The Tale of the Silent Servant" made horror magic.

Would you sacrifice your sister to appease a basement dwelling creature? Maybe Andy does, or maybe he doesn't — it's the lingering question that leaves you haunted.

8. "The Tale Of The Crimson Clown"

Clowns terrorizing children was a recurring theme, but the crimson clown gets a special nod for being both a clown and a doll. That poor kid didn't know what hit him.

Some of the show's best episodes weren't scary at all. "The Tale Of The Dream Girl" was a heartfelt version of The Sixth Sense... before The Sixth Sense was a thing.

Are You Afraid of the Dark? fans became disillusioned with fairy tales early in life thanks to this episode.

When a young model has her face stolen, things get real (and terrifying) in this unnerving tale.

As a Tia and Tamera Mowry fan, I may be biased on this one — but the idea of a chameleon taking over a human's life always felt wonderfully original. Having the Mowry twins on board only upped the cool factor.

Three words: baby Ryan Gosling. Also, this episode properly demonstrated how to snap any kid out of their obsession with all things ghoulish — introduce them to Gilbert Gottfried.

Building a pool on top of a graveyard will result in badly decayed bodies haunting your swimming area, just FYI. This is definitely one of the show's most memorable and visually disturbing outings, hands down.

Perfect for a good cry, "The Tale of the Shiny Red Bicycle" is all about friendship and redemption from beyond the grave.

16. "The Tale Of The Midnight Madness"

Nosferatu is not a vampire you want crawling out of a movie screen, but Are You Afraid of the Dark? lets him loose on a theater and its lying manager.

The whole vampires-in-a-blood-bank concept isn't exactly original, but the execution on this one was stellar. A kid gets dangled off a roof by an angry vampire on a kid's show.

A deaf girl and her bully are abducted by aliens and put into a human zoo in this particularly weird episode. What makes this one listworthy is the lingering promise that the aliens will come back for the heroine one day. So, it is safe to assume she pretty much never sleeps again.

Elderly people make great companions until you don't show up for tea one day and they decide haunting you is the perfect punishment. I love the twistiness of this episode — by the end the girl convinces her mom to move into the haunted apartment. Stockholm Syndrome much?

There is a bit of mad scientist silliness that takes away from the overall effect, but the actor who plays the youth-stealing Peter has a sneer that will haunt your nightmares for weeks.

The one and only true Halloween episode paid homage to The Legend of Sleepy Hollow with a deliciously fun story complete with a headless horseman.

From the funny to the moving and the scream-inducing, Are You Afraid of the Dark? episodes rarely ever disappointed. Trust me, re-watching them now will only remind you why stepping into an indoor pool or staring at a clown doll for too long still leaves you feeling unnerved.

More like this
Alicia Silverstone Has Recreated An Iconic 'Clueless' Scene
By Frances Stewart
The ‘Squid Game’ Season 2 Renewal Teases A Creepy New Figure & A Return
By Brian Anthony Hernandez and Bustle Editors
Everything To Know About 'Scream 6'
By Jack Irvin and Jake Viswanath
Emma Thompson, Lashana Lynch, & Stephen Graham Lead Netflix’s 'Matilda'
By Sophie McEvoy
Get Even More From Bustle — Sign Up For The Newsletter