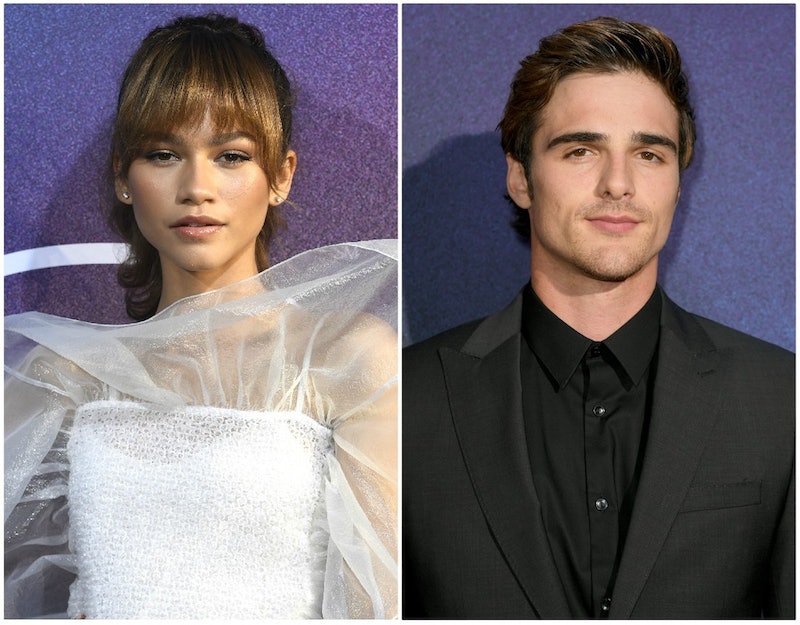 Cue the Euphoria theme song. Could Zendaya and Jacob Elordi be dating? The Euphoria actors are reportedly on vacation together in Greece. E! News first reported on Aug. 30 that the two were spotted out and about in the Euopean country enjoying a post-Euphoria vacation. (Bustle reached out to Zendaya and Elordi's reps for comment, but did not immediately hear back.)

In an Instagram picture posted on Aug. 30, user @marcus_easy shared a shot of the two co-stars in the background of his photo at the Acropolis of Athens. Naturally, the post sent fans into a frenzy in the comments section. More so, Zendaya and Elordi aren’t exactly vacationing alone. E! reports that the Euphoria actors are also joined by Law Roach, a stylist, and Darnell Appling, a friend and assistant to Zendaya. Both Zendaya and Elordi have remained mum on their respective social media accounts on their whereabouts. So far, the only official confirmation of the group vacation comes in the form of Roach’s Instagram post by the pool, which he captioned with several Greek flag emojis and a photo credit attributed to Zendaya herself.

Still, the above hilarious Instagram post isn’t the only official documentation of the trip. Various Twitter users have claimed that they’ve spotted the two at the Kaiki Beach Club. “jacob elordi and zendaya are on vacation together in greece,,” user @morgunaxstark tweeted in an Aug. 29 post that features the stars posed with fans.

In their HBO series Euphoria, Zendaya and Elordi depict Rue and Nate, respectively, two high school classmates with a very intense relationship. In the emotional Season 1 finale, Rue confronts the troubled jock in a tense scene over the events that unfolded with Jules. To say their fictional counterparts have a tumultuous dynamic in the series is an understatement. So, naturally, the joint vacation came as a major shock to fans. On Twitter, Euphoria stans collectively lost their minds.

Elsewhere, fans who were convinced that Zendaya was romantically linked to her Spider-Man co-star Tom Holland had reactions of their own.

As for Elordi, the Australian actor had last been romantically linked to his The Kissing Booth co-star Joey King for about two years. In April, however, various outlets reported that the two called it quits. Of course, Zendaya and Elordi’s joint vacation doesn’t necessarily point to signs of a new relationship. After all, in an interview with The Hollywood Reporter in June, Elordi revealed that the Euphoria cast became close onset. The joint vacation could simply mark a close friendship. "We were like a tight-knit family," he told THR. "We spent so many hours on set."

He added of his dynamic with Zendaya at the time, “It's kind of like this protagonist-antagonist thing. There's like this slow-burning tension I suppose between the two of them, her as Jules' protector and then him as whatever he is to Jules. I like the way that that triangle kind of works, because there's so much going on."

In an exclusive with Entertainment Tonight that same month, Elordi gushed about his “brilliant” and “beautiful” co-star. "It was amazing [working with Zendaya]. I'm a massive fan,” he told ET. “So when I found out she was going to be on the show, I was pretty stoked. She's brilliant, she's beautiful and she's a wonderful performer and she just captains the ship perfectly."

Whether the two are dating or simply just very good friends, this is a dynamic duo Euphoria fans can definitely get behind.