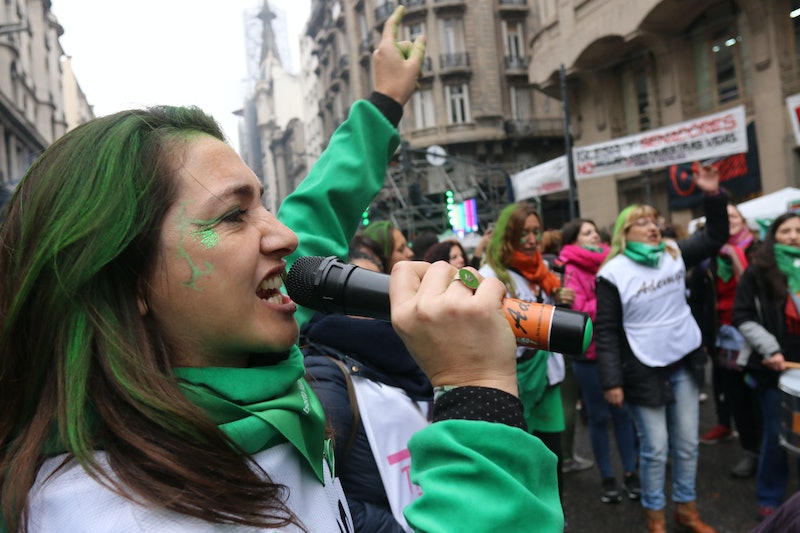 In a painful loss for the country's reproductive rights movement, Argentina's abortion legalization bill was defeated in the Senate early in the morning on Thursday, Aug. 9. The measure had narrowly passed the lower house of the Congress in June. This blow doesn't mark the end of the fight for abortion rights in Argentina: Abortion rights activists are already preparing their next steps, and a successful legalization push could be in the country's not-too-distant future.

Senate lawmakers shot down the bill, which would have allowed women to terminate pregnancies within 14 weeks, by 38 votes to 31. Currently, abortion is only legal in Argentina in the case of rape or when the woman's safety is threatened.

Still, human rights organizations estimate that Argentinian woman seek around 500,000 illegal abortions a year, according to The New York Times, many of which are performed under risky conditions. According to the Center for the Study of the State and Society, between 45,000 and 60,000 hospitalizations occur annually as a result of these procedures, which are also the leading cause of maternal death in Argentina.

Thursday's vote was watched not just by Argentina, but by the world, and especially the rest of the continent. "Legalization in Argentina would have a profound effect on the rest of Latin America," lawmaker Victoria Donda told The Guardian. Currently, only four out of 33 countries in Latin America — Cuba, Guyana, Puerto Rico, and Uruguay — have broadly legalized abortion, according to the Guttmacher Institute.

The reproductive freedom movement in Argentina is far from over. According to The Washington Post, most senators said that they were voting against the bill because it was too broad and that they would be open to a narrower version in the future. VICE News reports that a new bill could come before the Senate next year.

And Argentina's Congress isn't the only body that can act. President Mauricio Macri is considering decriminalizing abortion so that women who seek the procedure at least won't face prison sentences, according to the Argentine paper Clarin as reported by The Washington Post. Prior to Thursday's vote, Macri said that he wouldn't veto the bill if it passed, although he's personally pro-life.

Polls show that support for Argentine abortion rights has grown in recent years. Some surveys from this spring suggested that between 57 and 66 percent of the country supports legalization.

The fact that this bill got as far as it did — passing one chamber and only losing the other by seven votes — is a testament to those shifting attitudes. Congress' high-profile debate mobilized activists and will likely help energize the movement in the coming years.

That's the mindset of Emma Conn, a journalist at the Argentine news website The Bubble. "Even if it doesn't go through, this is a massive step to legalize abortion," she told Vox in June. "Whatever happens, everyone has noted that this has been a significant cultural change, so even if the bill is rejected, it's not going away."