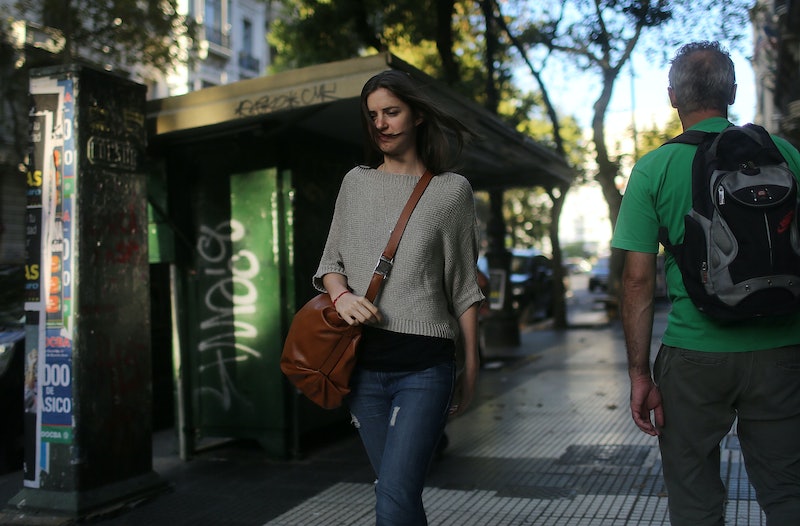 A South American judicial system appears to have come up with a creative way to punish a man for making discriminatory and misogynistic comments. Angel Etchecopar, an Argentine radio host accused of making sexist remarks, will be required to regularly host gender experts on his show, and he will be required to let them speak their piece without interruptions, NPR reports.

Argentine news outlet La Nación reports that once a week, for 10 minutes at a time, Etchecopar — sometimes known as "Baby" Etchecopar — will be required to host gender experts on his program, El Angel de Mediodia. He will not be allowed to interject during their talks, and he will be offered no time to rebut what it is that they say. The special programming is on deck to begin in March and will last five months. Etchecopar, as part of the agreement, was also required to offer a public apology and make a small charitable donation, according to La Nación.

Prosecutor Federico Villalba Díaz told the news outlet that his team had compiled "eight pages of derogatory, insulting, offensive, degrading, and discriminatory statements against women," which is what qualified his comments for prosecution under the "Law of Discrimination."

Etchecopar's willingness to participate in a rehabilitation-centered punishment was one of the reasons that prosecutors agreed to the deal, Díaz said. "Etchecopar came to the investigation with an attitude of repentance," Díaz told La Nación. "He was very different from the character I had seen in the media."

"He threw the idea, said he wanted to apologize, and then we started talking and this proposal came up," Díaz said. "He liked it because, he said, he wanted to reverse this image that he has as a discriminator, and he convinced us of his willingness to resolve the conflict."

The gender experts will be selected for him, La Nación reports, by special prosecutor Verónica Guagnino. Guagnino reportedly specializes in the area of gender-based violence.

Additionally, the punishment will reportedly function as a type of probation. If Etchecopar makes any comments that violate the country's discrimination laws within the next year, the agreement may be scrapped, and he may face prosecution, according to La Nación. But it was worth a try, Díaz suggested, because the punishment could stand to impact not just Etchecopar, but his audience, too.

"It seemed important to me that the listeners of Baby Etchecopar could listen to other voices and other explanations, different from the ones they are used to," Díaz told an Argentina correspondent for the French newspaper Le Monde, according to ABC Australia.

Argentina has had a bumpy year insofar as women's rights are concerned. While the government did pass a law earlier this month that will require all officials to participate in gender equality training, the government has been slow to expand other protections, like access to reproductive rights. An attempt to legalize elective abortion nationwide, up to 14 weeks of gestation, was struck down in August by the country's senate. Abortion in Argentina remains legal only in instances of rape, or when the mother's health is severely at risk.