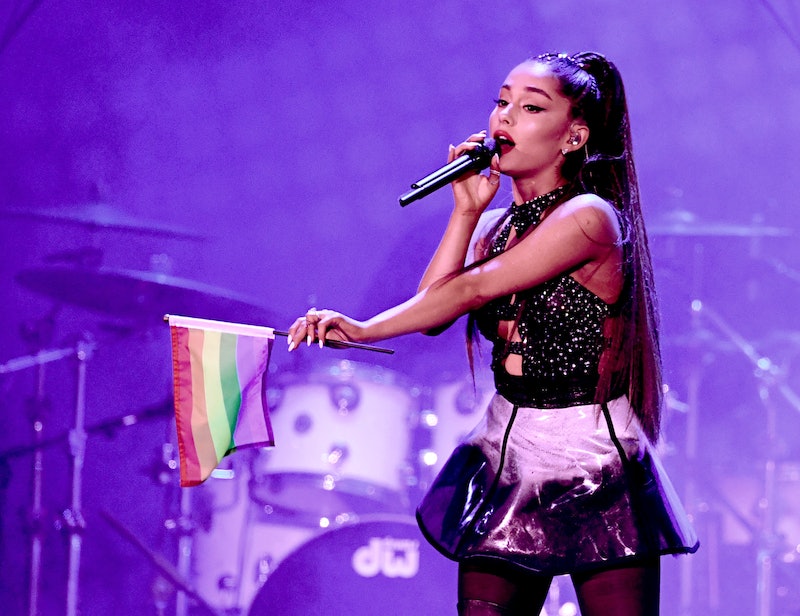 While it's not uncommon for musicians and performers to cancel shows due to illness or injury, Ariana Grande canceling tour dates after an allergic reaction to tomatoes came as a surprise to both fans and to Grande herself. In an Instagram post, Grande said her "throat pretty much closed," and even though she is recovering, it still feels like she is "swallowing cactus." The cause of her symptoms was identified as a new allergy to tomatoes.

"There is nothing more unfair than an Italian woman developing an allergy to tomatoes in her 20s," Grande said in her post. As a fellow Italian American, I can only imagine the horror of suddenly not being able to eat anything tomato based. While most food allergies develop in childhood, Dr. Scott Commins, an associate professor of medicine and pediatrics at the University of North Carolina at Chapel Hill, tells Bustle that adult onset food allergies can happen, and one type is more common than others.

"When it happens you typically hear about seafood and tree nuts to some extent. Seafood is kind of the classic one that happens in adulthood. Then there’s one to beef and pork related to tick bites, but that you’d just get a brand new allergy to food is pretty uncommon," he says.

On the other hand, another adult onset food allergy happens fairly often. "The most common thing we see in adults is a cross reactivity known as oral allergy syndrome, also called pollen food allergy. Essentially it’s an allergy to pollen, and there are some foods that cross react with pollen. It’s pretty common because it’s really based on the pollen allergy [versus an allergy to the food]," Dr. Commins explains.

He says that about 15 to 20% of adults who have a pollen allergy will develop a pollen food allergy, too. "They typically get symptoms in their mouth and throat such as oral itching, and their lips might swell. But they don’t typically have hives or anaphylaxis." What's more, the allergy is more likely to flare up during pollen season.

"If you’re allergic to grass, which is the pollen that cross reacts with tomatoes, during the grass pollen season when you’re breathing all this pollen in, you’re much more likely to be bothered by certain allergens that cross react. Whereas if it’s winter and there’s no pollen out, often people tolerate the foods just fine," he says.

While it's not clear what kind of allergy Grande has, Dr. Commins tells Bustle that pollen food allergy is treatable. "If you have pollen food allergy, often if we do allergy shots for the pollen allergy, the food cross reactivity gets much better. It’s always a good idea to get tested if you have a food allergy because there are nuances to them and sometimes there’s ways to treat them." However, this is not true for all adult onset food allergies. "For adults who become allergic to seafood, that’s not treatable [and seafood must be avoided]."

While a sudden allergy to tomatoes could be from a cross reaction to grass pollen, that's not the only explanation. Tomatoes are from a family of vegetables known as nightshades. It's important to note that an allergy to nightshades is rare, but it can happen. Medical News Today reported that people who are allergic or intolerant to one nightshade, like tomatoes, could be also be allergic or intolerant to another, like eggplant.

Commonly eaten nightshades include white potatoes, tomatoes, eggplant, bell peppers, chilis, huckleberries, and goji berries. People with a nightshade allergy may have an adverse reaction to the chemical compounds in the vegetables known as alkaloids. While not everyone who is allergic to one nightshade is allergic to all nightshades, Medical News Today suggested that those who suspect they have an allergy or intolerance to nightshades keep a food diary.

Even if you've never had a reaction to a food in the past, if you start to have symptoms like hives or difficulty breathing or swallowing, take it seriously and seek medical attention ASAP. On Instagram, Grande said she is recovering and is looking forward to resuming her "Sweetener" world tour. She also thanked fans for their love and support, adding that she plans to make up the shows canceled in Tampa and Orlando, Florida, at a later date.