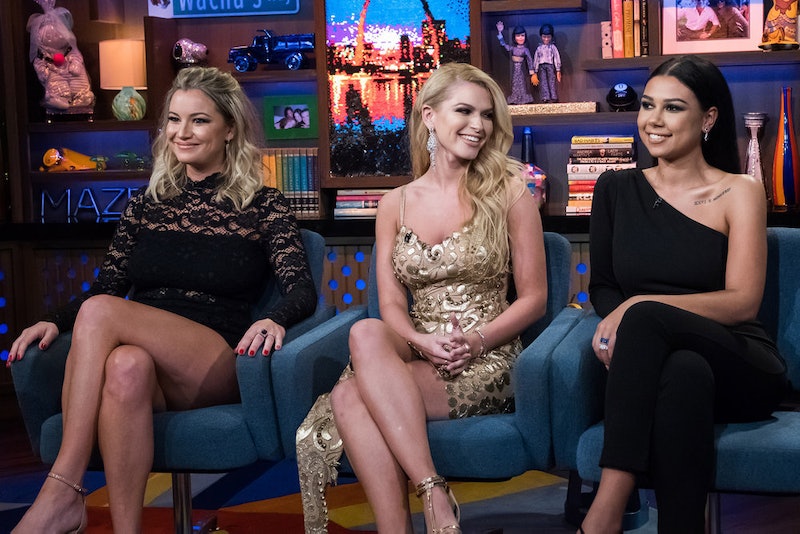 There's been a lot of drama this season on Below Deck Mediterranean (when isn't there?), but viewers probably didn't expect this from stew Kasey Cohen. During Tuesday's Watch What Happens Live With Andy Cohen, it was revealed that Below Deck Med's Kasey is friends with Ariana Grande. Say what now? She knows the talented singer and is only just mentioning it? Kasey, this would've made for great conversation on the yacht.

WWHL host Andy Cohen read a fan question wondering about photos of Kasey and Grande on social media. Per the Bravolebrity, she simply started out as the "No Tears Left To Cry" singer's fan and their relationship evolved into somewhat of a friendship. "Um, started out as a fan," Kasey said. "Then, ended up having mutual friends with her and would constantly meet her, hang out, and we became friendly."

It doesn't seem like they are best friends or anything, but to say you're "friendly" with Grande is still a big deal. Oh, and they apparently "hang out"? Yeah, that's major. The Below Deck Med rookie has shared many pictures of herself and Grande on Instagram. Yes, they are all adorable. It looks like a lot of the photos Kasey has shared with Grande are from possibly meeting her at concerts, events, or running into her in parking lots of all places. Like Kasey said, she "would constantly meet" Grande. Lucky her!

Here Is A Group Shot

This is all the way back in 2013 and could be from a meet and greet before Grande's concert.

This one should be framed.

In The Middle Of A Crowd

Kasey was definitely lucky to snap this with all of the other fans surrounding the singer.

Even if she's hanging out of a car window, this is still a cute picture.

They both look stunning.

The Best Photo Yet

How hilarious is this?

Kasey and Grande also had an exchange on Twitter in December 2014. The reality start got the Sweetener artist's attention after posting a photo of Daniel Radcliffe with a bunch of dogs and captioning it, "@Ariana Grande and her puppies." The musician replied, "this is on point." Of course, the tweet made Kasey's day and she responded, "[two crying laughing emojis] love you."

Funnily enough, Below Deck star Kate Chastain tweeted on June 26 how much Kasey reminds her of Grande. "Ariana Grande and Kasey have so much in common: 1) ride or die commitment to a high ponytail 2) both often confused with a coffee order," Kate wrote.

Kasey's response? A photo of herself with Grande, obviously.

Kate followed in Kasey's footsteps by replying, "Guess what Kasey!? You seem to be doing so well learning the ropes my friend and I decided to start a high ponytail fan club in your honor," and attaching a photo of herself with Pete Davidson, Grande's fiancée. Kasey tweeted her back, "I’m very honored, how lucky are we."

Maybe one day fans will see Grande living it up on a luxury yacht in the Mediterranean with Kasey by her side as either her friend or her personal stew? Really, either way would be amazing.