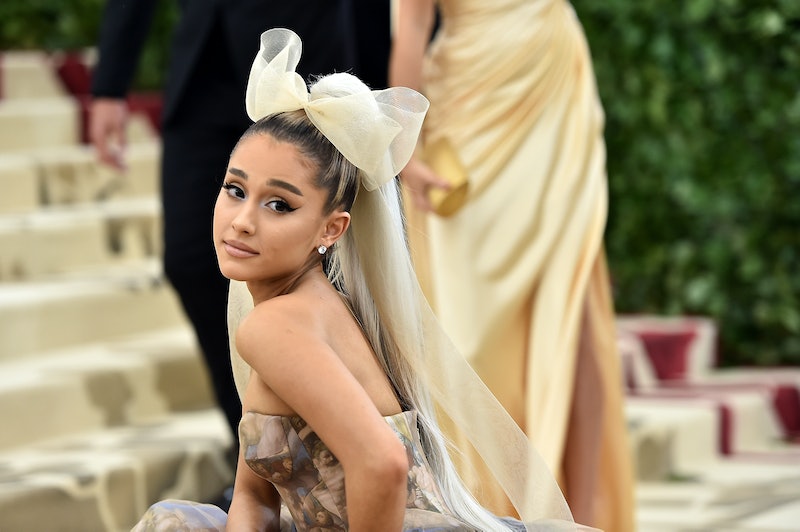 It's been four years since Ariana Grande's grandfather — fondly remembered by fans as Grandpa Grande, the sweetest Twitter user around — passed away. And, to honor him on the fourth anniversary of his passing, Ariana Grande is paying tribute to her granddad in perhaps the most appropriately celebratory way: By collecting snippets of Grandpa Grande's "greatest hits," of course. Those who've paid a visit to Grande's Twitter account on Sunday afternoon, July 22, know that, in this case, "greatest hits" basically refers to Grandpa Grande's quippiest one-liners, kindest gestures, and general all-star grandpa behavior.

Veteran fans of Grande and her music might remember that there's quite a lot to choose from, as far as her grandfather's most memorable moments are concerned. So, in gathering particularly stand-out tidbits of her granddad's life on this day of commemoration, Grande turned to her fans for support, as well as a couple of suggestions. But before asking fans to contribute their own favorite Grandpa Grande memories, the 25-year-old singer kicked off Sunday's remembrance of her beloved grandparent with a few tweets of her own.

Both of her tweets pay homage to her grandfather, whose legacy as a kindhearted, funny, and exceedingly vibrant family man remains unparalleled. The first commemorative tweet from Grande came mid-day Sunday, when she took to Twitter with a beautiful black-and-white shot of herself and Grandpa Grande, grinning ear to ear. She wrote, "miss n love u forever my best friend." She quickly followed that initial post with another photo of both her grandpa and grandma looking especially radiant. She captioned the sweet image: "forever n then some."

Those wondering what it was about Grandpa Grande that made him so widely beloved — not only by his family and friends, but by his granddaughter's fans, too — need not look much further than the string of tweets that have cropped up on Grande's Twitter feed these last few hours. Prompted by Grande herself, the singer's account is now full of memories about her grandfather, courtesy of some submissions from her fans.

The sweet memory exchange started with a tweet from Grande, which, naturally, accompanied a particularly notable Grandpa Grande memory of her own. "OMG, the best throwback," Grande wrote, captioning a re-tweet from her own account four years ago that seemed to capture Grandpa Grande in his element. "'A lotta b*tches I don't trust' — grandpa.... still the greatest quote of all time," Grande's 2014 tweet reads. And while that one might actually take the cake, as far as top-notch throwbacks go, she still asked her followers to join the memory-collecting effort.

Grande asked her followers, "if u see any other grandpa quotes or gems please share w me today."

Suffice to say, it's only been a couple of hours since Grande first sent out the request to her Twitter following, but a quick scroll through her feed (which has now become something of a full-fledged running tribute to Grandpa Grande and his extraordinary spirit) seems to confirm that fans were just as keen on celebrating her grandfather's legacy as she was.

And, after parsing through the equal-parts funny, insightful, and totally heartwarming Grandpa Grande-isms that fans came up with Sunday afternoon, it's easy to see why. Even just based on those tidbits currently featured at the top of Grande's Twitter account, the fact that Grandpa Grande was a pretty incredible, one-of-a-kind guy is a truth that feels almost impossible to argue with. And while a running list of memories can't ever measure up to the real thing, Grande's tribute certainly went above and beyond, as far as honoring her grandfather's legacy goes. Of course, with such a rich arsenal of material to work with, it's no surprise the commemorative homage really hit home. Thanks, Grandpa Grande.