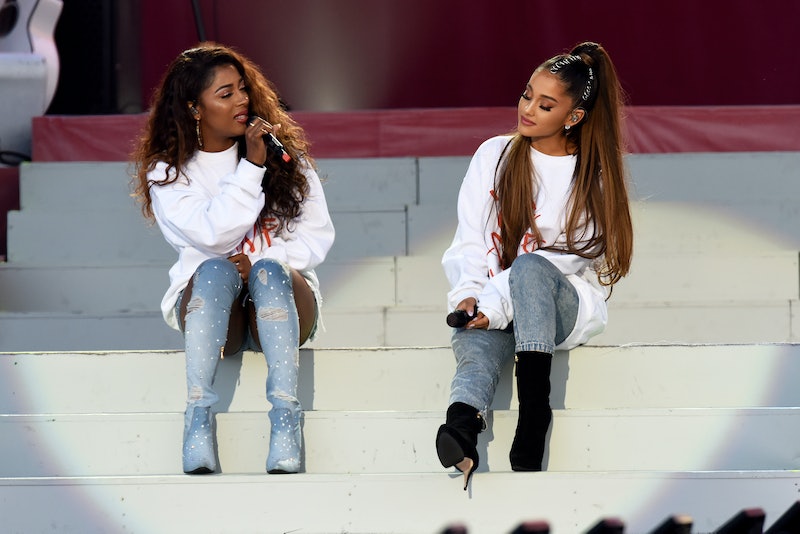 On Monday, March 25, during the Washington D.C. stop on her Sweetener World Tour, Ariana Grande and Victoria Monét performed an unreleased song called "She Got Her Own," E! News reported. Grande invited Monét, her friend and frequent collaborator, up on stage to perform the track. She later posted a video of herself and Monet singing together with a caption that both paid tribute to her BFF and hinted at even more music that the 25 year-old plans to release, including "She Got Her Own."

On her Instagram, Grande wrote, "I dunno where I’d be without u but it sure wouldn’t be here n for sure wouldn’t at all be this special or magical. I am so grateful for u. got to perform dis vintage gem with my best friend tonight." As fans know, Monét helped co-write multiple songs on the Thank U, Next album, including the album's two biggest hits "Thank U, Next" and "7 Rings," per Genius. In a recent interview with Variety, Monét said that she and Grande first met two years before the latter's first album, 2014's My Everything. "We ended up really loving each other’s working relationship, but then at some point, the friendship part just trumped the work," Monét said.

Even though the song may sound completely new to untrained ears, Arianators figured out that the "Thank U, Next" singer had actually teased it on social media back in 2016. E! reported that a YouTube video from October 2016 shows Grande singing along to "She Got Her Own," which only the most die-hard fans would probably remember. (Based on the dog filter, it looks like she may have teased the song on Snapchat.)

Grande apparently knows her fans extremely well, too, because the next sentiment in her Instagram post about the duet addressed them. "I know you’re all going to spam us with ‘DROP IT NOW’ but there’s a plan ! We promise. Patience. Oh and we made another one this trip too. You’ll get that one too. At some point," the recent Grammy-winner wrote. Considering that Grande released two albums (Sweetener and Thank U, Next) within six months, a whole new album could be well on its way.

Grande has recently spoken about wanting to produce more albums in the near future in interviews, so her recent Instagram post likely doesn't come as a shock to people who follow the prolific pop princess closely. In an interview with Billboard from early December 2018, Grande said, "I don’t want to do what people tell me to do, I don’t want to conform to the pop star agenda. I want to do it on my own terms from now on." She continued, hinting that more surprise releases could be in store: "If I want to tour two albums at once, I’m going to tour two albums at once. If I want to drop a third album while I’m on tour [in 2019], I’ll do that too!"

In the same Billboard interview Grande mentioned that the duo, Social House, who produced "Thank U, Next" is opening for her during the Sweetener Tour. "You don’t think we’re going to have a studio on the bus? That we’re not going to be making records on the road? Of course we are," Grande said.

Should Grande release a new album in the next few months with the music she's creating on the road, it sounds like Social House and Monét will most likely have some part in it.