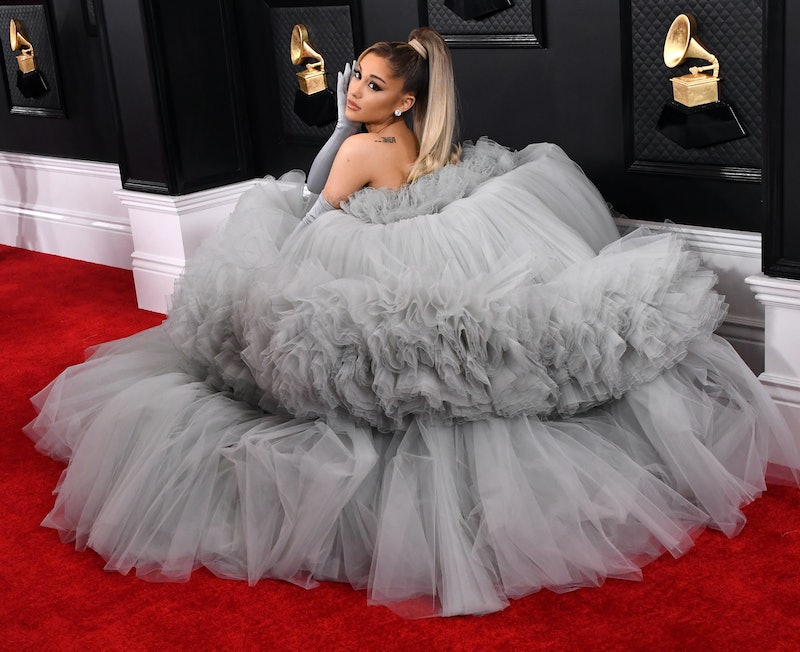 When you think of the 2019 horror movie, Midsommar, there's one image that instantly comes to mind: that gigantic, iconic flower dress worn by Florence Pugh's character, Dani, during the climax. So naturally, when the film's studio announced plans to auction it off for charity, Ariana Grande revealed plans to buy Florence Pugh's Midsommar flower dress for an upcoming Halloween costume. And she already has the seal of approval from the actor herself.

Beginning on April 27, fans can bid on ten original props from Midsommar on studio A24's auction website, with all of the proceeds benefitting the FDNY Foundation, and their COVID-19 Emergency Fund to "directly support members and their families who are suffering from this pandemic." Among the items up for auction are the "Hårga collectibles," a collection of items from Dani and her friends' trip to a Swedish commune. However, the star of the show is "the original 10,000-silk-flower May Queen gown from Midsommar's fiery finale" — as the website describes it — which horror movie obsessive Grande already has her eye on.

After the auction hit the news, Grande shared some screenshots of a text message she received from from a friend, alerting her to the A24 auction, on her Instagram Story. "THE AMOUNT OF PEOPLE WHO HAVE TEXTED ME THIS," Grande responded to her friend, before tagging Pugh herself in the post. "[Florence Pugh] I'm crying / also I'm bidding as soon as possible."

In response, Pugh reposted Grande's declaration of interest on her own Instagram Story, encouraging her to bid on the dress. "DO IT!" Pugh wrote. "Halloween will never be the same." As it turns out, Grande was actually planning a Midsommar-themed Halloween costume for 2020, and told Pugh that she was "already planning to have it made anyway."

However, it was then that Pugh revealed the final detail that convinced Grande to officially throw her hat in the ring for that one-of-a-kind May Queen gown. "It even has hand holes for wine," Pugh wrote, to which Grande responded with a desperate plea of "HELP ME." In other words, fans can probably expect to see the singer rocking the floral frock ASAP.

Grande and Pugh have recently struck up a social media friendship, after the actor earned backlash from her relationship with Zach Braff — and their 21-year age gap — when she wished her boyfriend a happy birthday on Instagram. Pugh defended herself and her relationship in an Instagram video directed at her followers. “I do not need you to tell me who I should or should not love and I would never in my life — ever ever — tell anyone who they can or cannot love," Pugh said in her video, which she captioned with the message that "Being hateful is not trendy."

Grande praised Pugh in the comments of that post, writing that she was going to make "'being hateful is not trendy' a new tattoo for my chest." She followed that up by telling Pugh, "I love and appreciate you so much," and reposted the video to her own Instagram Story, where she shared that Pugh's post deeply resonated with her. "Sharing special, personal life things that make you happy on the internet can be truly traumatic," Grande wrote at the time. "I know I've taken a step back from doing so to protect my loved ones and myself."

Clearly, these two May Queens were destined to find each other and form a strong bond, based on respect, boundaries and horror films.

More like this
Christina Perri Reacts To Her 'Twilight' Song Being One Of YouTube's Most-Viewed Ever
By Radhika Menon
Madonna’s Reason For Directing Her Own Biopic Is So Madonna
By Maxine Harrison
Lady Gaga Will Star In 'Joker: Folie À Deux' With Joaquin Phoenix
By Jake Viswanath
Taylor Swift Calls Dwayne Johnson "The Man" After Revealing New "Taylor's Version" Song
By Jake Viswanath
Get Even More From Bustle — Sign Up For The Newsletter