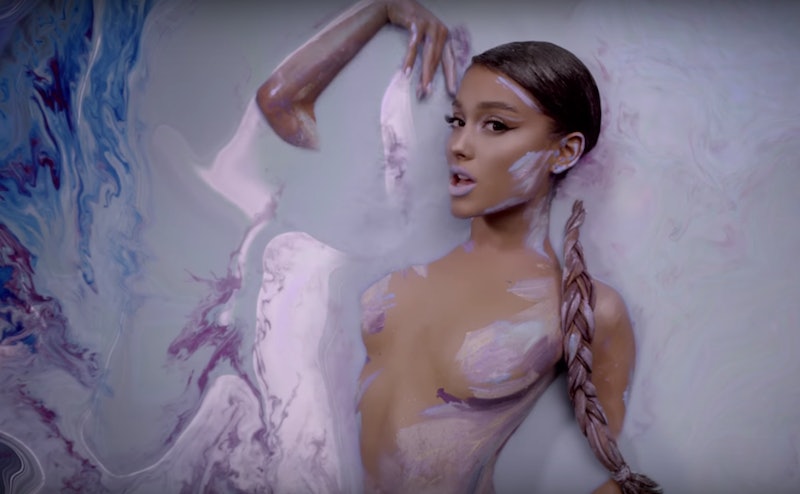 The full Sweetener album is still a little under a month from release, but the video for Ariana Grande's "God Is A Woman" is here, and it should be more than enough to tide you over. After days of teasing, the song itself was released at midnight going from Thursday into Friday, and the video followed just 12 hours later, with a noon release on July 13.

Right off the bat, it's easy to see why Grande's fiancé Pete Davidson chose "GIAW" as his favorite track off of Sweetener, writing in his Instagram stories on Thursday: "this is my fav one on the album it's bonkers!" The song is an empowering anthem, grooving along that perfect line between fun and sexy with lyrics like:

"And I can tell that you know I know how I want it / Ain't nobody else can relate / Boy, I like that you ain't afraid / Baby, lay me down and let's pray / I'm telling you the way I like it, how I want it"

The song is about knowing what you want and not being afraid to ask for it, which is exactly the sentiment that women — and really everyone — needs in this day and age. And that same self-loving spirit comes through in the newly-released video, which you can watch below.

The four minute video is full of sexy messages and innuendo about female sexuality and power; some hidden, and some more obvious. At one point, Grande sings a verse in a pool of sunlight beaming down from the center of a pair of spread, disembodied legs. At another, she swings a hammer above her head, shattering the glass ceiling that hangs above her.

In fact, almost every moment of this video includes imagery that's a bizarre, compelling combination of feminism, art, cartoonishness, and sex. And to be honest, we have to talk about it all. So here are some of the most eyebrow-raising moments of "God Is A Woman," that probably no one fully understands except for Grande herself.

1. When She Gyrated At The Center Of The Universe

Sometimes you gotta wade hip-deep into the Milky Way and just shake it, y'know?

2. When She Floated In That Paint Vagina

Not only is Grande clearly supposed to look naked in this shot, but does the shape that the paint-water is making look familiar to you?

3. When She And Her Girls Writhed On This Bed

Nothing like squirming around "nude" in bed early in the morning to wake you up and get you ready for the day.

4. When She Jumped Into A Pop-Up Book And Let Angry White Men Hurl Insults At Her

5. When She Deeply Misunderstood Picture Day

The message here is clearly about standing out, but whoever's taking this photo is gonna be really bummed when they get it developed and it's only the back of Grande's head.

6. When She Sat On Top Of The World And Fingered A Hurricane

We're all learning a lot about weather formation today, aren't we?

7. When These Animatronic Groundhogs Screamed At Us Mid-Video

...with absolutely no explanation.

8. When A Sketched Version Of The Singer Emerged From A Mountain Of Writhing Ariana Grandes

9. When She Was Pregnant

Her belly blew up and then shrank back down, right in front of our eyes.

10. When These Leotard-Clad Men Held Her Up

Are they small? Is she big? What happens if she falls? The world may never know.

11. When All Her Friends Were Illustrated Doggies

Is this some kind of Cerberus the Three-Headed-Dog imagery? Whatever it is, it's probably best not to mess with Grande and her pups.

12. When She Went Full Illuminati

13. When She Worshipped At The Altar Of The Holy Crotch

Featuring some discreetly-placed beams of sunlight.

14. When She Took Some Real Liberties With Her Combat Uniform

Can't imagine those cat ears on the helmet are standard-issue, but Grande really makes it work.

15. When She Walked A Tightrope With Planets For Balloons

This looks like a pretty solid allegory for the tightrope Grande has had to walk between being seen as a child and growing into a woman. But, she clearly wants fans to know that she's got the world in her hands, even when she might be struggling to find balance.

16. When She Lived In A Candle

Seems a little warm, but sure — why not?

17. When She And Her Friends Had A Really Bizarre Sleepover

Her parents are gonna be so mad when they get home from vacation. They said she could have eight people over max.

18. When She Was Queen Of A Very Dangerous Lighthouse

Highly recommend that you don't stand there.

19. When She Recreated The Sistine Chapel Ceiling

Not only is God a woman, but She's also apparently Ariana Grande.

At the end of the day, it seems like the true message of the video is meant for Grande alone, but fans should be forever grateful that she took us on this incredible, twisted journey through her head.

More like this
Self Esteem's “F*cking Wizardry” Is An Anthem About Knowing Your Worth
By El Hunt
Everything To Know About Taylor Swift’s 10th Studio Album, 'Midnights'
By Grace Wehniainen and Jake Viswanath
Twitter Is Freaking Out Over Rihanna’s 2023 Super Bowl Halftime Show Announcement
By Stephanie Topacio Long
Two UK Cities Are Now In The Running To Host Eurovision 2023
By Sam Ramsden and Rachel Mantock
Get Even More From Bustle — Sign Up For The Newsletter