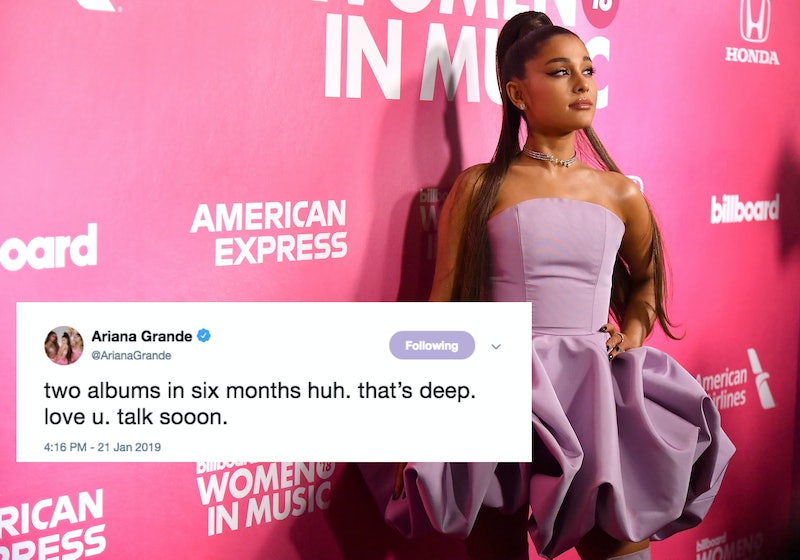 She's been through tragedy, and more recently, at the center of some controversy. Still, there's no stopping Ariana Grande, as she's coming into 2019 full-force. On Monday, Jan. 21, the singer responded to fans speculating about her upcoming album in a string of mysterious tweets. It seems Grande's Thank U, Next album release date is so soon, and the preorder date is just around the corner. Seriously, does this girl sleep?

UPDATE: On Tuesday, Grande dropped the album's track list on Instagram and confirmed in the caption that it'll be released on Feb. 8.

EARLIER: Thank U, Next, dubbed "AG5" (Grande's fifth studio album) is likely to drop on Feb. 8 given information Grande may have revealed in a response to a fan. The fan tweeted, "is it feb the 8th !!!!!!!! that’s my 21st sis," and Grande slyly responded, "how convenient." When another said, "Hopefully it releases feb so its the best birthday gift," Grande wrote back with an ever-so subtle "hbd."

There is really no rest for this hustler. Grande further revealed that Thank U, Next's cover, track list, and preorder will all be available to the public on Friday, Jan. 25. (This comes just six months after the release of her last studio album Sweetener.) Her Twitter fingers even provided some intel on what the album will be like. For example, Grande engaged with a few fans who tweeted about the album release date's proximity to Valentine's Day. It seems this album may not be one for the lovers...

In the above tweet, she wrote a cryptic "happy valentine's day" to a fan who predicted the album will "make everyone single." When another fan wrote that the album dropping before Valentine's Day will get "everyone pregnant," Grande responded, "oh quite the opposite." I have a sneaking suspicion the ex files are fair game in what's ahead.

Grande also revealed that her latest song "7 Rings" is her last single before the album comes and that she might give additional snippets of other tracks even though she doesn't "like to plan" those sort of things. Grande even knows TUN's third single already, writing, "mhmm" to a fan who asked. Lastly, Grande revealed there won't be any features on TUN in a tweet reading, "nah :)" when a fan asked about it.

If anything, Grande seems super confident about what's in store.

Although her latest "7 Rings" song and video caused controversy for seemingly appropriating black culture, as well as being accused of copying other artists' work, fans have still dissected the video for Easter eggs. (Grande responded to some of the backlash surrounding "7 Rings," saying in a comment on The Shade Room's Instagram, "it's never my intention to offend anybody.") One hidden hint in "7 Rings" may be in the car's license plate which has the numbers 25 and 1985 on it. Audiences thought 25 meant Jan. 25 for an album release date, but given what Grande's revealed on Monday, it could mean Feb. 5, or have no connection to TUN at all.

Despite any backlash surrounding the song and video, "7 Rings" broke a record by becoming Spotify's highest-streamed song in its first 24 hours (14.96 million times). TUN's first single of the same name also made history. "Thank U, Next" broke YouTube's record for most-watched video in 24 hours of release with 46 million views. If these numbers suggest anything, it's that Thank U, Next will be a smash.