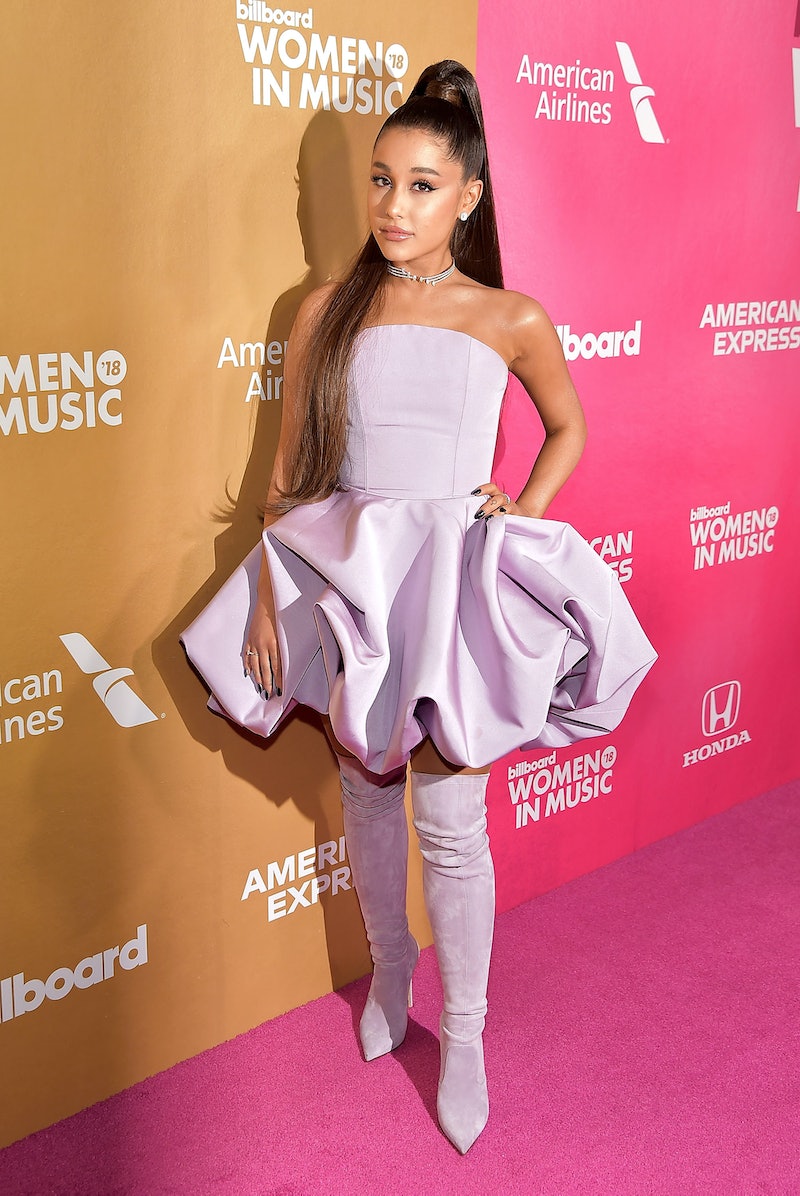 The Harry Potter series might have come to an end 12 years ago when Deathly Hallows was published, but that doesn't mean that fans have moved on. Everyone still fiercely debates which Hogwarts house they fall into, and that includes Ariana Grande. Ariana Grande wore a Slytherin headband, hinting that she is part of Salazar Slytherin's team.

Grande posted the photo onto her Instagram on July 11. The image was of the top of her head, and highlighted her fierce eyeliner flick and swept back hair. Her locks were pushed back with an academic-looking headband with the Slytherin house colors and symbol. For those who have never jumped onto the Harry Potter bandwagon, the Slytherin colors are green and silver, and the symbol is a snake. The snake is used because the house founder, Salazar Slytherin, was a Parseltongue and could talk to snakes.

Fans loved the head nod to J.K. Rowling, and flooded the comments with praise and cheeky jokes. "Ariana Potter," one fan wrote. "But she is Slytherin soo... Ariana Malfoy," another countered.

"More pictures please! Especially moving pictures," a follower joked, referring to the wizarding world's moving and talking photographs. "What houses are Myron n Toulouse in," one commenter wondered, asking the real questions. They were referring to Grande's pet dogs.

Others wondered if this was a show of fandom, or a sneak peek into an upcoming music video. For her Sweetener album, Grande has released a series of music videos that payed homage to childhood movies and music videos. So the speculation isn't completely out of left field.

"Thank U, Next" famously featured a mashup of rom-coms from the early 2000s, with Grande being the star in each one. The artist used scenes from 13 Going on 30, Mean Girls, Bring It On, and Legally Blonde, paying homage to the iconic films.

Then more recently, Grande's Vogue Cover Video Performance was a music video for "In My Head," and seemed to mimic early 2000s R&B music videos. The set included a spaceship-like setting, plenty of leather and vinyl, and bright florescent lighting.

So it would be fair to wonder if the Slytherin headband was a hint of an upcoming Harry Potter themed video.

Grande's Slytherin allegiance isn't new information, though. The artist confirmed that she was in House Slytherin way back in 2015. Tom Felton, who played Draco Malfoy in the film adaptation, was asked by Huff Post to sort celebrities into Hogwarts houses, and he placed Grande in Gryffindor. Seeing the error, Grande hopped onto Twitter and revealed that Pottermore actually put her into Slytherin.

Then in May 2018, Grande announced her relationship with Pete Davidson with an homage to Harry Potter. In an Instagram post that has since been deleted, Grande wore her Slytherin robes, Davidson donned Gryffindor robes, and the two proved that people in opposing houses could still love one another.

If you, too, identify as a Slytherin, then you can shop Grande's headband for just $7.99 at Spencer's Gifts.

No matter how many years pass by, we're all still going to be dressing up in Harry Potter gear and arguing about which house is the best. For Grande, Slytherin is the only answer.