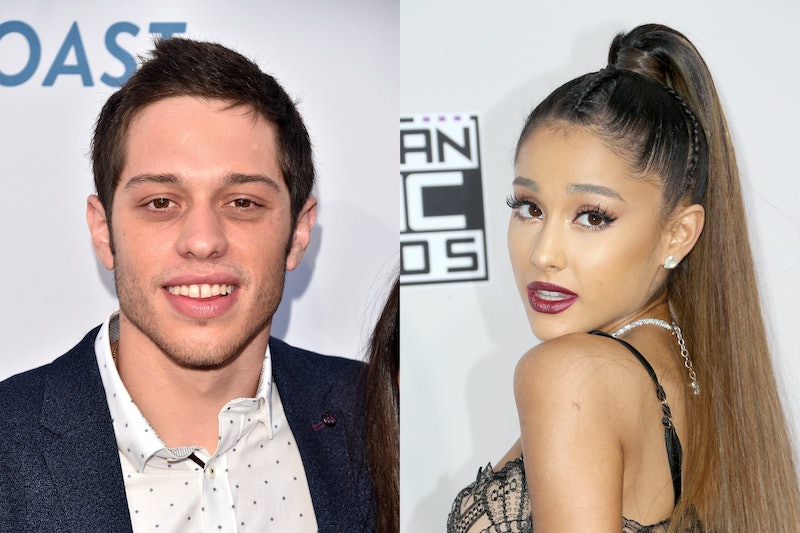 If a picture is worth a thousand words, then Pete Davidson's latest Instagram photo says it all. The post sure makes it look like Pete Davidson and Ariana Grande really are dating — and they're apparently both huge Harry Potter fans. Davidson's photo shows him and Grande wearing Hogwarts-style robes, and they have on matching sweatshirts, too.

Davidson's sweatshirt and robe reveal that he identifies as a Gryffindor member. Grande's sweatshirt isn't visible in Davidson's photo, but in a separate post on her own Instagram account, Grande wears a Slytherin sweatshirt, making her own Hogwarts alliance known. You can also see the differences between her robe and Davidson's, proving that the singer identifies as a member of the house of Slytherin.

What really makes the photo, though, is the Saturday Night Live star's caption: "the chamber of secrets has been opened ..." The quote is a Harry Potter reference, of course, it definitely seems like a reference to the rumored couple's new relationship, too. Since they've now opened up their dating status to the world. But regardless of what it all means, the photo is super cute, and it's clear Davidson and Grande aren't taking themselves too seriously.

Rumors that Grande and Davidson were dating started just over a week ago, and fans have been very invested in the relationship. People reported the news last Monday, with an unnamed source telling the magazine that the relationship is "very casual."

Still, it seems like the two of them have been spending a lot of time together recently. Davidson reportedly supported Grande at the Billboard Music Awards, spending time with the "No Tears Left to Cry" singer backstage after her performance. Plus, a tattooed arm that definitely could be Davidson's appeared in Grande's Instagram story over the weekend, which suggested that Davidson and Grande spent Memorial Day weekend together. Some fans thought Grande's Instagram story marked the first time she and Davidson posted a photo of themselves together. Either way, the new Harry Potter photo is the first pic they've taken together that shows both of their faces.

Before this, there were even more relationship hints about Grande and Davidson on the singer's Instagram account. Five days ago, she shared a selfie, captioning it "last night boy, i met u when i was sleeeep you're such a dream to me ☁️." And Davidson commented on the post, writing, "ummmmm hi," along with a drooling-face emoji.

On Tuesday night, Grande also shared a photo of Davidson doing a standup set on her Instagram story, adding the heart-eye emoji, along with another smiling emoji and a monkey emoji. She's been leaving various comments on Davidson's Instagram posts, too, including the emoji for a cloud, a monkey, and a fairy on a recent video Davidson shared of himself with a container of "kindness dust." Plus, fans think Grande and Davidson might have matching cloud tattoos, too, which would explain some of the emojis Grande's been sharing on Instagram.

Before Davidson and Grande started dating, Grande dated rapper Mac Miller. The couple announced their breakup about three weeks ago, citing each of their busy schedules. Last week, though, Grande stepped in to defend herself after a fan's tweet suggested that the breakup was to blame for Miller's arrest for an alleged DUI. Grande responded to the tweet with a Notes app statement, writing in part,

I am not a babysitter or a mother and no woman should feel that they need to be. I have cared for him and tried to support his sobriety & prayed for his balance for years (and always will of course) but shaming/blaming women for a man’s inability to keep his sh*t together is a very major problem.

(Bustle reached out to Miller's rep for comment, but did not receive a response.)

Regardless of how things ended between her and Miller, Grande's tweet makes a great point. Fans can't know everything that went on between the two of them, but blaming Grande for Miller's arrest isn't OK, and she let them know that with her statement.

Since then, though, it looks like Grande is super happy with Davidson. They may be an unlikely pair, but their recent Instagram posts show they have common interests, including a love of Harry Potter. And, honestly, their Instagram banter couldn't be cuter.