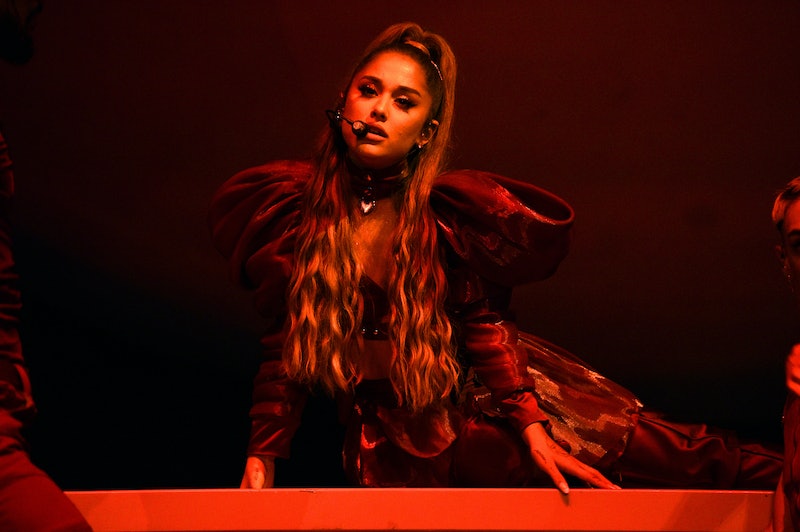 One year after the hit song was released, Ariana Grande shared a "Thank U, Next" anniversary message for fans that celebrated healing. On Sunday, Grande took to Twitter to discuss "Thank U, Next", and how much she's learned in the year since the single dropped. The Sweetener singer also took the opportunity to thank friends and fans for supporting her through the good and the bad times, writing that the anniversary made her particularly emotional about the people in her life.

On Sunday, Grande wished "Thank U, Next" a happy birthday, and then took stock of the year since the song came out, writing: "i can’t believe i’ve spent more time alone this year than i have in my life, i can’t believe how many sessions w my therapist i’ve had, how many times i’ve sung this song, how much i’ve learned and healed, how much i still have to learn and heal!"

Grande dropped "Thank U, Next" on Nov. 3, 2018, and the song, which was a surprise release, became an instant hit. The singer penned the single following her split with fiancé Pete Davidson, but instead of being a diss track, it celebrates growing from past relationships and choosing independence. "Thank U, Next" debuted at No. 1 on the Billboard Hot 100, and the music video broke viewership records on YouTube, racking up over 55 million views in 24 hours, as per NPR Music.

On Twitter, Grande shared her thoughts and feelings about the year following the hit, writing, "it’s been one hell of a productive, emotional, wild and yet ... happy! year." She went on to thank fans for giving her, "endless strength, energy, and inspiration" as well as friends who supported her on tour and at home. Grande also tweeted about accepting the unknown, especially in romantic relationships, writing: "update: i still don’t know sh*t ab love or have a clue what a personal life looks like other than hanging with pups and piggy which i’ve learned is ... actually ... more than enough!"

The Sweetener singer finished her posts about the song's anniversary noting the day brought up many emotions, and assuring fans, "my heart feels good. even though everything is up in the air." Grande also noted that despite having "a million questions" she is working to feel whole.